Images of Canberra – They See Me Rollin’, They Hatin’ 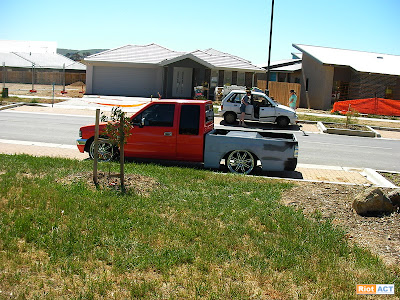 I saw this one in Forde the other day and just had to share.

On the bright side, at least the half with the rego sticker on it is probably kosher.

Got an image of Canberra you want to share with the world? Email it to images@the-riotact.com

42 Responses to Images of Canberra – They See Me Rollin’, They Hatin’
Filter
Showing only Website comments

Oh there’s a car there? I was looking at the shoddy buildings and tiny yards embodied by Forde.

It is a girl that owns it. Her name is Amy I’m pretty sure. I do believe this is her car, she is an interesting person…….

Does it still look like that after two years?

It is a girl that owns it. Her name is Amy I’m pretty sure. I do believe this is her car, she is an interesting person…….

That is just silly.

If it is the vehicle I think it is – a female owns it.

The owner’s been watching too many hip-hop music videos or it’s just off the boat from East LA.

Now there’s a twist! I didn’t see that one coming.

If it is the vehicle I think it is – a female owns it.

Looking at the dog park of course.

They See Me Rollin’, They Hatin’

Where’s the person in the hat?

I’m sure it will be a very nice car once its finished.

I saw this one in Forde the other day

More importantly, what the hell were you doing out in Forde anyway JB? I think that’s the vehicle of the only person who lives out there isn’t it?

how about bigger images ? or at least clickable to a bigger one so we don’t have to squint

Because the OP was skulking out of sight with his camera, in case the tragic who owns this muddle was big and sick of people laughing at his car.

the trouble with doing stuff to cars like this, is the people doing the doing are often not very style-minded, so they end up making an ugly mess.

I quite like the B & S utes, the more outrageous the better. they are making some like mini trucks, with the big truck exhaust sticking up, rows of lights etc, I think they’re quite funny. but the body-kit on this thing just looks wrong. It might improve when they bog it up and paint it, but I suspect peopel will always laugh at it.

The mechanics I used to go to did up cars, chopped bits off and changed them. They did Zooks and Jeeps, and I remember them making a SWB Vitara into a little ute – they cut off the body behind the front seats, closed up the cabin, and made a little ute tray out the back just big enough to clear the back wheels and hold a lashed-down spare wheel. They did the usual jack-up for the suspension too and I think they put a bigger engine in.

– “existing or applying as part of the natural order of the universe rather than arranged by humanity”.

Looking like a tosser is definitely part of the natural order, as are arguments about which particular looks are tosser-worthy.

Although I suspect this ‘God’ (as distinct from ‘god’) would be also pretty easy-going about body kits and airbags — more important things afoot.

just wish you could have gotten a better close up of the bird in the background…..

Sarah Emmerson - 8 hours ago
I’ve been making them for free! $22 for an adult wow 😮 other friends made 100 for the hospital staff. View
Saskia White - 11 hours ago
Linda Gillespie it’s more about keeping your bugs on you and not sharing them around, as opposed to stopping you inhaling o... View
Linda Gillespie - 12 hours ago
Saskia White no they won’t, they are fashion not medical masks. Btw if someone has the virus they should be either in hospi... View
News 24