‘In the Spirit of Banjo’ Tim the Yowie Man book launch 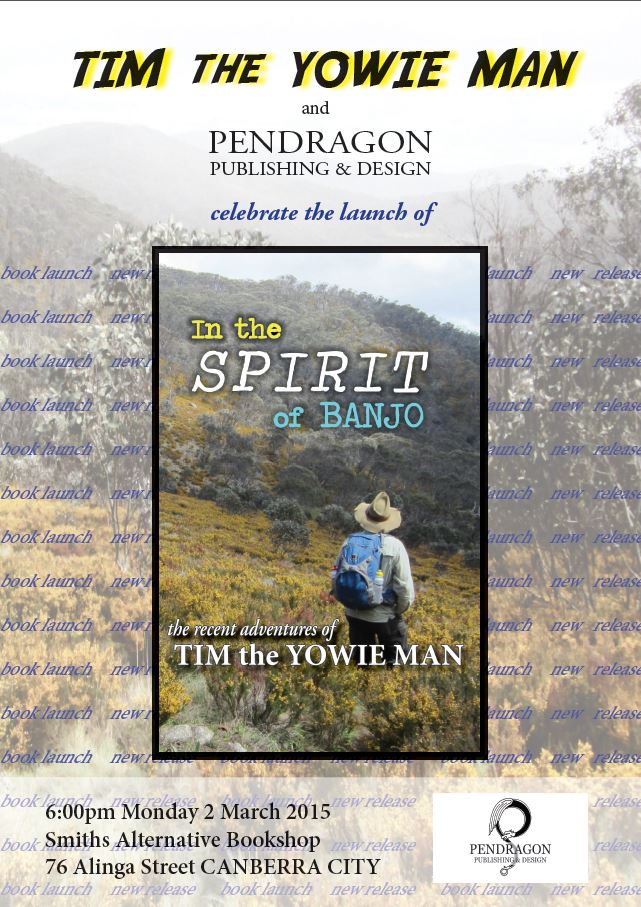 “Water plunges 40 metres off the cliff top with so much gusto that the morning sun rising upstream creates a rainbow through the water spray. It reaches from one side of the falls to the other. Overhead, a lone wedge-tailed eagle, flirting on the updrafts, is dwarfed by the gaping gorge that opens up like a giant’s yawn in the ancient landscape below.”

Waxing lyrical about everything from the windswept rocky crags of the high country to ghost hunting at the Bredbo Inn, Tim the Yowie Man is certainly not your average travel writer.

In the Spirit of Banjo brings together a collection of his articles originally published in The Canberra Times and other newspapers and is available from Pendragon Publishing & Design and selected bookstores in 2015.

In the Spirit of Banjo follows Tim’s adventures from the nation’s capital, to the Southern Highlands, the Snowy Mountains, the Southern Tablelands and the beautiful South Coast of New South Wales where he explores rugged mountain ranges, haunted lighthouses, stunning waterfalls, and other little known historical, ecological and environmental gems.

If you are a fan of Tim the Yowie Man, this book is definitely for you. If you’re yet to discover him, you will find his words entertaining and inspiring to the point of wanting to follow in the footsteps of the Yowie Man. Who knows what you will find?

I quite like this bloke and his stories of the area. Will keep an eye out for his book when next in the book store.

Julie Macklin - 6 hours ago
Unfortunately I would have to keep my petrol car too, as electric cars can't go where I want to drive. Good for urban areas,... View
Brent Hutch - 6 hours ago
Even 200,000 cars at a discounted price of 40k per car, will be 8billion. Obviously this number will increase as more cars ar... View
Gloria Altinger - 6 hours ago
Brent Hutch 12km for 675M.. 85 klm North to south... hmm ok so maybe at least a 100K 50k Electric cars to the roughly 260k re... View
ACT Election 21

Keith Cheetham - 9 hours ago
Pork barreling at its best as Labor does. And then dont initialise it. View
Bronwyn Wilson - 15 hours ago
Where are e teacher librarians going to come from? There are very, very few in the ACT - that’s why so many schools don’t... View
Chris Cross - 15 hours ago
Layla Barry almost $1 TRILLION and counting, courtesy of Federal Liberals, who almost scared the nation into recession with t... View
Lifestyle 9

Lisa Norrie - 16 hours ago
Small minded people with sfa to do maybe take up a hobby get a full time job focus on your family there’s millions of thing... View
Toni Higgins - 1 day ago
Shame facebook cant b used for good only instead people like to b nasty and put people down all the time.wonder if they would... View
Property 8

Paroksh Datta Prasad - 21 hours ago
Adam Burzynski I called it in 2013 hehe View
Adam Burzynski - 21 hours ago
Paroksh it has begun.... View
Scott Humphries - 2 days ago
"Braddon of the south" . So the light industry and commercial businesses will eventually be pushed out by apartments, just as... View
News 14

Jim Jim - 24 hours ago
Balanced journalism Ian, neither political party are doing that fantastic a job and deserve your devotion. Be critical of bot... View
News 7

Jess Peil - 1 day ago
This is so exciting! View
Roland De Saxe - 1 day ago
Great idea for Eden area View
Talla Mc Bogan - 2 days ago
happened in the otways ,, mountain bikes took the moto tracks ,, they only use a small area though ,, so plenty of moto track... View
Opinion 32

@The_RiotACT @The_RiotACT
From the reggae-infused sound of CBR trio Kopasetic through to the raucous punk rock of The Dirty Sunflowers, this week’s #GigGuide has something for everyone https://t.co/rHIqQWMMVn (6 hours ago)

@The_RiotACT @The_RiotACT
There’s a new food van on the block in Belconnen and it packs a ton of nostalgia & amazing Sri Lankan flavours https://t.co/aOH5vJ6z8f (8 hours ago)

@The_RiotACT @The_RiotACT
Canberrans can look forward to some events going ahead over the spring and summer but a cloud remains over multi-day festivals such as Summernats and big public celebrations unless the current crowd rules change https://t.co/VO9eYdqVGg (10 hours ago)