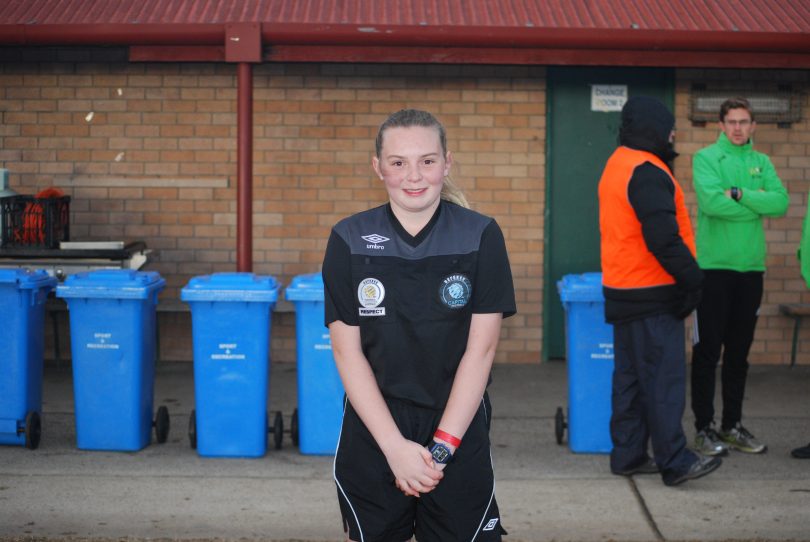 What does the largest international youth football tournament in the southern hemisphere require? A lot of referees.

Approximately 180 registered referees have been officiating all week in the nation’s capital for the prestigious Kanga Cup competition. This includes 150 Canberra referees and the rest made up of 30 referees from other states and overseas.

The heavy workload that the Kanga Cup referees endure sees them officiate 3-5 games a day, which is a lot of whistle-blowing and running.

“It’s been really fun,” Bronte said. “It definitely gives us the chance to perfect our skills and have games constantly and have refs from Queensland that give us their point of view.”

The intense tournament schedule compared to local competition is something Bronte is not used to, but she has found it very rewarding.

“On a weekly basis you get maybe two games and then with Kanga Cup you are getting five games a day,” she said. “It’s definitely a lot more work, but in terms of skills, meeting new people and learning from other people it has been really good.”

Despite the rigorous activity that occurs on a day-to-day basis, Bronte mentioned that all of the referees have come together to create a family-like atmosphere.

“There is a family-build within refereeing,” she said. “We are all a team, you could have met each other that first 20 minutes before a game, but as soon as you hop on that field, you guys are united as a team and are always backing each other up and never feel alone.

“If you aren’t sure of anything, someone is there to back you up and help you out.”

Bradley, (17), is a referee from New Zealand and he said that the experiences throughout the tournament have been different from what he’s used to back home. 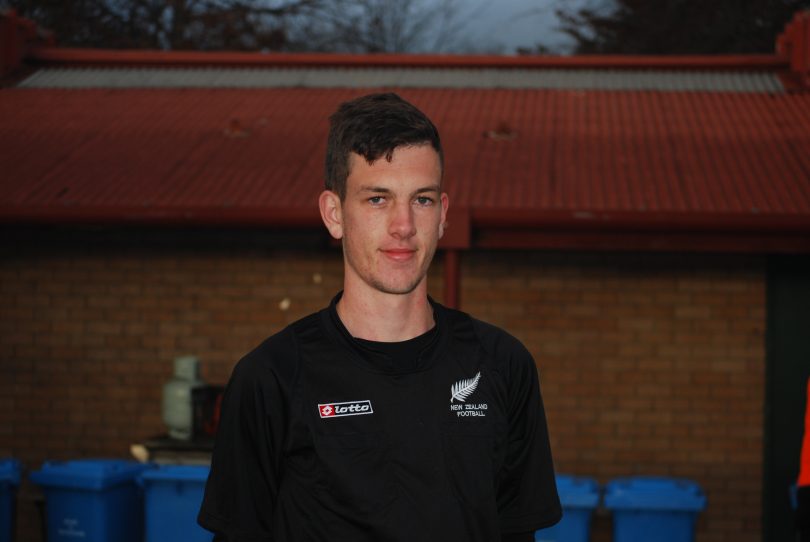 Bradley Johnston is a referee that has travelled from New Zealand to take part in the 2019 Kanga Cup.

“It is completely different,” Bradley said. “There are good teams, good players, and it is a bit more challenging than back home.”

“All the refereeing coaching you get, it is unique compared to New Zealand coaching, the atmosphere is just great and we have had a lot of support.”

While it is only his third year of refereeing and only his first Kanga Cup, learning has played a huge role for Bradley during his time on the field.

“You have to learn the proper positioning as a referee,” he said. “I struggled with that at the start, but now I have completely nailed it down through all the coaching I have received.”

Refereeing three matches a day is something he is not used to, however, he has found it enjoyable and talked about the importance of developing a strong mentality.

“It is challenging, once you get to the third game you are a bit buggered, but it’s all fun, you keep going,” he said. “The morning you get your appointments, you prepare for it and with your breaks in-between, you make sure to warm down.”

Adam Powers is the referee director for Capital Football and the Kanga Cup and he said that initially, it is difficult to find the required numbers prior to the start of the tournament.

“It can be really hard,” Adam said.

“It’s school holidays on a local level so we normally aim to get between 150 and 200 local referees from a pool of about 300 plus local referees that we aim to recruit to work the week.”

Outside of Australia, the Kanga Cup has had a long-standing connection with the Auckland Football Federation to bring referees to the Kanga Cup.

Seeing junior referees like Bronte and Bradley enjoying their time at the Kanga Cup is something Adam is very pleased about.

“It’s great to see,” he said. “Especially for our local referees, it is a great development opportunity because they earn money during the week, they also get additional coaching that they might not get at their local junior club.

“They get to meet some of our senior referees and potentially meet some of the international and interstate referees that bring a different perspective of refereeing.

“It’s great to see by the end of the week, come grand final day the smiles on the referees knowing they have put in a good performance and are enjoying themselves.”

Marc Edwards - 2 hours ago
David Field Dickson’s not depressing, not everything needs to be sparkly and new. View
Tim Scully - 3 hours ago
Hmmm. “... two levels of basement car parking.” View
Sally Pinata - 4 hours ago
KinWah Kee is this what you’re talking about? View
Opinion 33

Russell Nankervis - 10 hours ago
I'm going to work. If the date changed I would be a little more keen to party View
Patrick Boucher - 23 hours ago
What happened to the concert being free? Used to be View
Business 17

Kir Rin - 10 hours ago
WHS Act is able to trump Discrimination law in certain circumstances. So presumably it’s possible. View
HiddenDragon - 22 hours ago
A very interesting related legal question will be businesses which promote themselves as "safe" because their staff have been... View
News 16

Leigh Brady - 11 hours ago
The downside of that is that little CBR would be at the small end of any improvements/upgrades - and any decisions made on th... View
News 14

Despina Despina - 22 hours ago
We are so lucky in this country. Yet we have the COVID deniers, and anti vaxers who seem to refuse that COVID exists. Thank y... View
Lance Russell Baker - 23 hours ago
Timothy Bailey Too true. Their bizarre belief that they are the world's shining example of democracy is unbelievable. I could... View
Food & Wine 8

During the 'unprecedented' year we all experienced in Canberra during 2020, lots of new words and emotions entered my vocabulary....
Food & Wine 104

The staff and customers at Jindabyne Bowling Club were surprised to see a brown snake slither up to the bar...
Food & Wine 63

The thought of attending a three-hour class involving a lot of stretching would normally have me running screaming for the...
News 29

Commuters will have to swap some light rail services for buses for two weeks from Sunday as construction of the...
Community 27

@The_RiotACT @The_RiotACT
Plans for the milestone mixed-use development have been welcomed as helping to reinvigorate the Phillip business area https://t.co/3ZEpwioL0n (2 hours ago)

@The_RiotACT @The_RiotACT
The results of Kosciuszko's post-bushfire brumby count are in, but they've done little to subdue the squabbles over how the contentious steeds should be managed https://t.co/Nw39mbxx1B (5 hours ago)