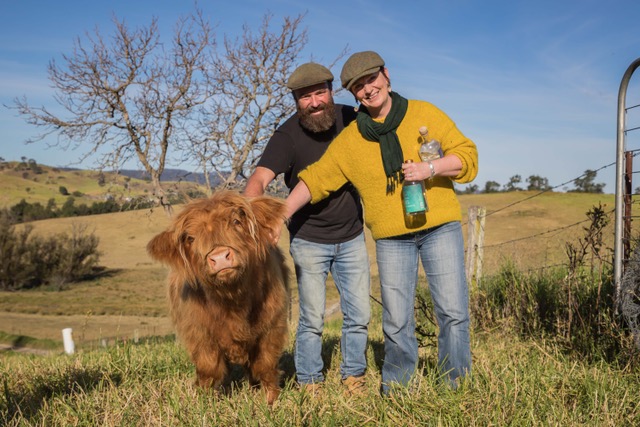 A Bega Valley micro-gin distillery has picked up an additional two international awards despite being impacted by a horror season of bushfires.

In a rollercoaster year, North of Eden’s small-batch gins, The Classic and The Connoisseur, have won a medal each from this year’s San Francisco World Spirits Competition.

The Classic claimed silver and The Connoisseur took a bronze medal.

The San Francisco World Spirits Competition’s winners were selected from a pool of over 3,000 entries from around the globe.

Gavin Hughes and Karen Touchie make only 200 bottles at a time on Jill, their much loved 100-litre copper still. They say that they’re proving that size isn’t everything in the world of craft distilling.

“A 100-litre still might sound big, but in the world of commercial gin production it’s actually really small and it’s one of the things that sets us apart from other distilleries,” explains Hughes.

“It’s also why these latest medals are so fantastic because they demonstrate we can produce consistently great gin using small-batch artisan methods.” 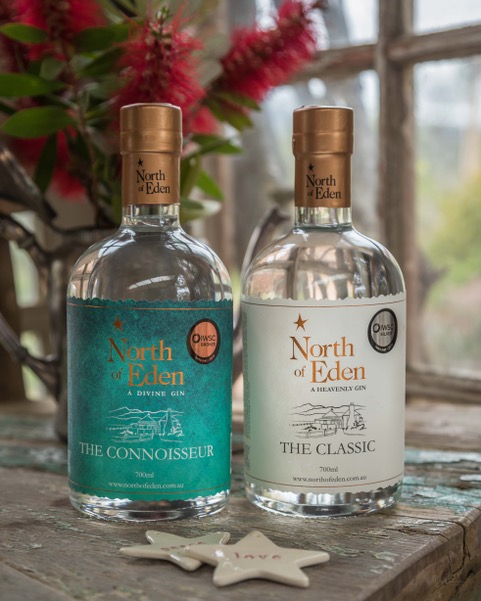 The award-winning gin from North of Eden.

North of Eden operates from 12 acres just outside Bega in a distillery that used to be a farm shed. There are three alembic copper stills and the company infuses their gin with homegrown citrus and Australian native finger limes.

Like many in small business on the far south coast, Hughes and Touchie have been doing it tough this year. They are unable to open their cellar door and their highly anticipated Gin School, which had been enjoying a big response, was open for only two weeks after the bushfires before it was forced to close due to COVID-19.

“This was supposed to be our big launch year,” explains Touchie. “All our gin school classes were sold out, but between the bushfires and now the pandemic we’ve had to refund months of bookings and we have no idea about when we might be able to re-open.”

But despite the setbacks, the couple is rolling with the punches and is planning to release a brand-new gin, The Admiral, in the next few weeks.

At 114 per cent proof, The Admiral will be North of Eden’s “Navy Strength” gin and, according to Hughes, the couple’s best gin yet.

“We’re hoping for Gold for this one,” says Hughes, laughing.

North of Eden gin is available from independent bottle shops along the south coast and Farrahs Liquor Collective in Canberra.

Dani Hache - 7 hours ago
Whilst this is 100% accurate, it cannot be fixed with the government failing to invest in an APS workforce. These businesses... View
Bill Bloxham - 7 hours ago
Been going on since Adam was a boy View
David W Jones - 10 hours ago
Just look at the number of contractors that just keep getting extensions or renewals with no questions asked! View
News 6

jam - 7 hours ago
The tram is more easily accessed by more people as it encourages dense development within its reach. It isn’t really possib... View
bj_ACT - 8 hours ago
The issues with the Bus route changes and the loss of bus stops for Tuggeranong in 2019 were obvious to anyone with half a br... View
Winkie Wee - 9 hours ago
I'm lucky in that I live within a short walk to either the R4 or R5 buses. I use the bus quite a bit unless both of us need t... View
Breaking 4

Jimbo Lambert - 8 hours ago
Areas in Gungahlin haven't been mowed for at least 6 months! How hard is it to use our high rates money to employ some more m... View
Jimbo Lambert - 8 hours ago
Randy Goldberg you mean 6 months later? You must live in a more affluent area than Gungahlin, as it seems we have been alloca... View
Frank Arnold - 10 hours ago
Ohhh myyy Goddd !...Crooked pavements!...pot holes in our roads!...and now it's long grass !!!! FFS we hardly had any 3/4 yea... View
Community 6

kenbehrens - 10 hours ago
That makes no sense. Your comparisons are 20-25 years apart. The "new" bus route takes longer because it services a bigger ar... View
bj_ACT - 11 hours ago
Not sure about the adding 10 minutes to the 333 journey by changing to go past College St and UC. The change Only added 1.2km... View
michael quirk - 16 hours ago
Yes,but it is by no means certain that light rail stimulates urban redevelopment more than BRT. Much depends on design of the... View
News 1

JS9 - 18 hours ago
All this highlights again is a) How ridiculously stupid the retail electricity approach in Australia is in general (basically... View
show more show less
*Results are based on activity within last 7 days

@the_riotact @The_RiotACT
Hot in the City: You knead a box of The Bite CBR’s pretzels in your life! https://t.co/6b3M1kuAyH (8 hours ago)