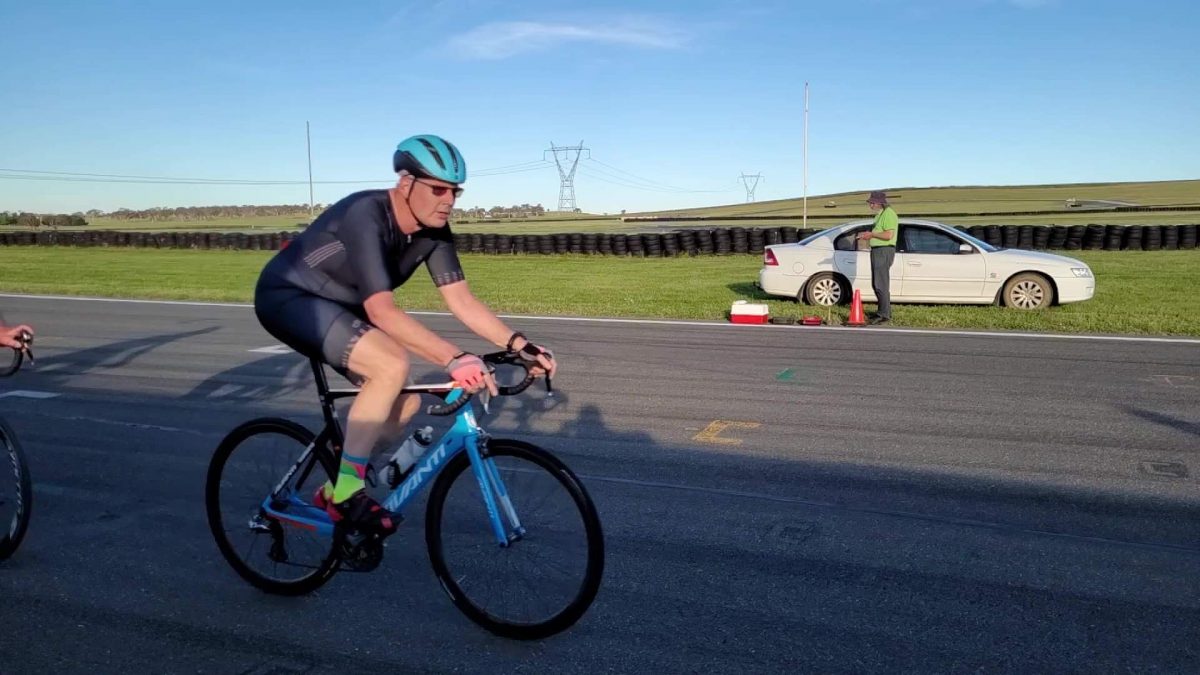 Ian Wardale was a keen cyclist who suffered a traumatic brain injury after falling off his bike. Photo: Mandy Wardale.

Everything can change in the blink of an eye. Ian Wardale and his wife, Mandy, know this only too well.

Ten months ago, the keen cyclist was riding at Wakefield Park on a Wednesday evening when he fell off his bike.

“We still don’t really know what happened to him, just that it was the last lap of the ride and he fell off,” Mandy said. 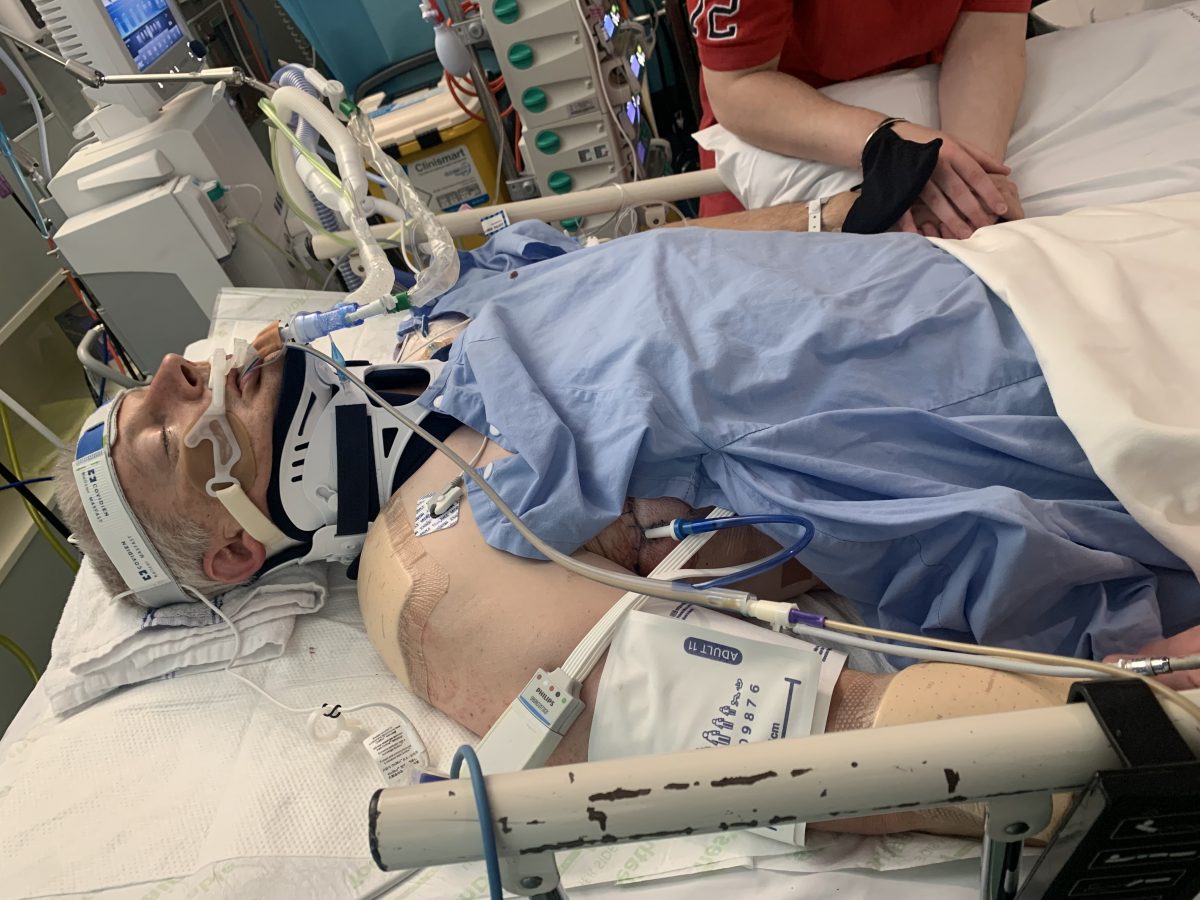 He had no movement in his left leg and he had bruises from head to toe.

“It looked to me like there was no part of him that wasn’t broken,” Mandy explained.

“There was no life for a long time.”

Following the cycling accident, Ian was rushed to Canberra Hospital. He spent 10 days in the ICU before being transferred to the neurological ward.

It was several days before he regained consciousness and Mandy was warned it would be touch and go for some time.

Since the accident, Ian has had to relearn how to walk, talk, speak and eat.

He spent just less than two months in hospital.

Amazingly, he hasn’t been deterred from getting back on the bike either.

He’s currently riding on the trainer which he’s been doing every couple of days for half an hour or an hour since he left hospital.

He hasn’t been back on the road yet as he waits for his balance to return.

“That’s all part of the process,” he said.

The physical recovery hasn’t been the only hard part, unfortunately.

Mandy and Ian have both struggled with people being wary of them, even stand-offish.

“It’s like people don’t know how to treat us and they are unsure of us. When people think brain injury, they think Ian is going to dribble or something so they find it difficult,” they said.

Ian’s message – which he’s delivered following Brain Injury Awareness Week – is clear: “Treat me like I’m me, like I’m normal, and if I can’t do something, or I can’t answer something, I will tell you otherwise.”

Ian has found difficulty remembering people’s names since the accident, although he joked that is one thing he has always struggled with.

“If I haven’t seen someone in a while, it simply takes me a bit longer to remember their name now,” he said.

“That doesn’t stop me from having a conversation with them or anything.”

Mandy and Ian are incredibly optimistic about the future, despite the challenges they are facing.

“We lean on each other for support,” Mandy said.

“And we know we just have to keep on pedalling forward to find out where we are going next and how well he can recover.” 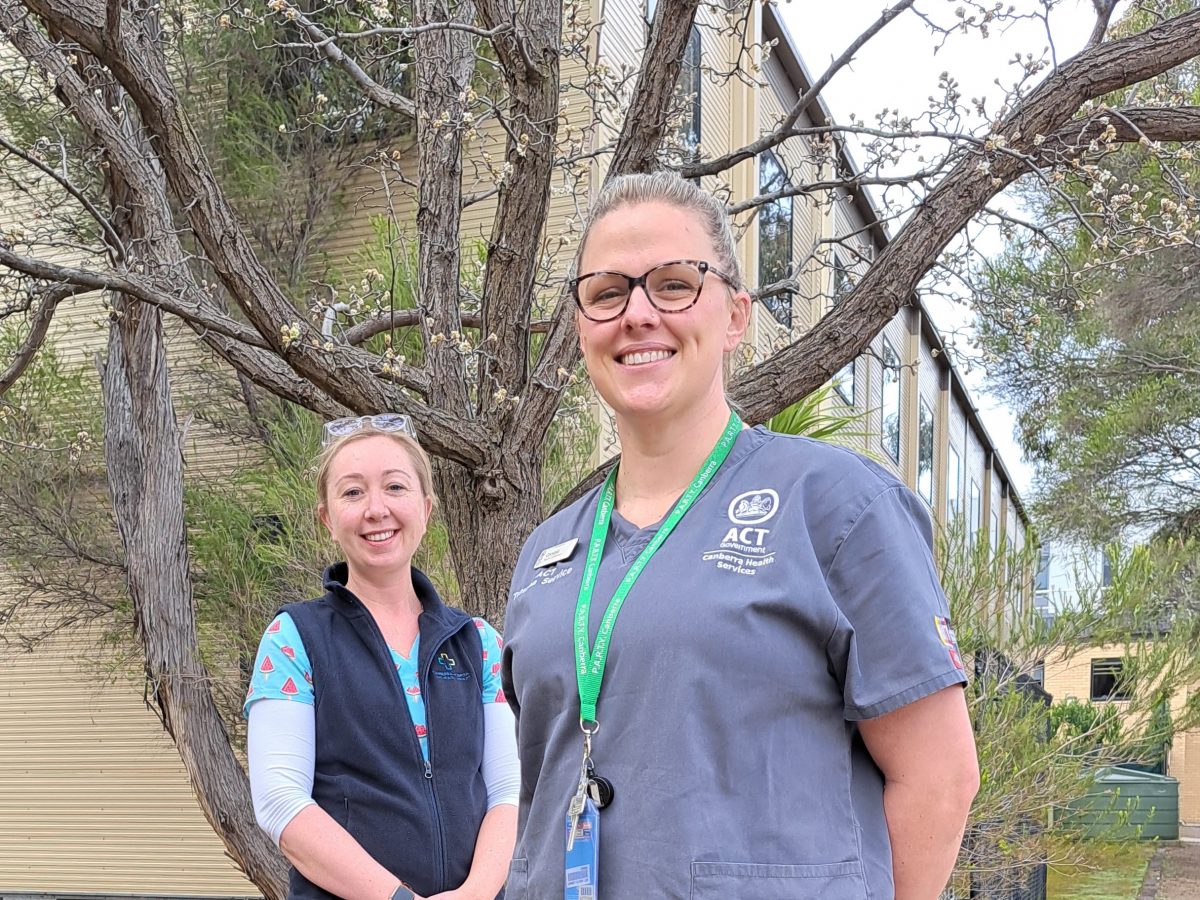 Clinical nurse consultant for neurosurgery Danniele Hunter and trauma coordinator at Canberra Hospital Georgia Gotts say brain injuries can be very trying for loved ones because so much is uncertain. Photo: Canberra Health Services.

Injuries like Ian’s aren’t as rare as you’d hope.

One in 45 Australians live with a brain injury and more than 200 patients were admitted to Canberra Hospital with a moderate to severe injury last year alone.

Clinical nurse consultant for neurosurgery Danniele Hunter was heartbroken to hear people were almost afraid of talking to Ian and Mandy.

“We see families go through so much here. Those struggles – and coming out the other end – should be celebrated; they shouldn’t be something to be scared of,” she said.

“It’s a very slow process and there is a lot of waiting involved,” she explained.

Families do receive regular updates on their loved ones from trauma case managers at the hospital and allied health professionals like social workers and physiotherapists.

“We do really try to ensure this is a supportive environment and we get to know them really well because they are often here for such a long time,” Danniele said.

Push bikes are stupid dangerous, especially when mixing with heavy traffic.. Best of luck all the same.

Ian, yes you are normal and still you -“Treat me like I’m me, like I’m normal, and if I can’t do something, or I can’t answer something, I will tell you otherwise.”
I hope those in your inner circle learn this sooner and not let their fear of the unknown get in the way.
Wishing you and your family all the best on your road to recovery – take care and hope you still get back on your bike one day

Such a beautiful family ❤️