Kangaroo shot with arrow in Queanbeyan 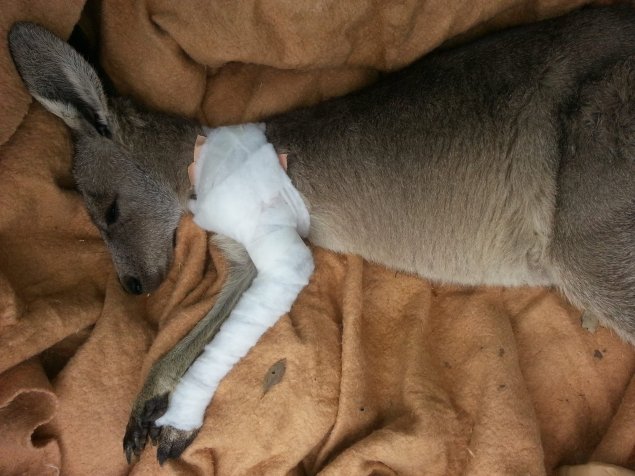 On Tuesday morning, a resident of Greenleigh in Queanbeyan looked out onto her driveway and saw a young kangaroo. He was hurt. He hadn’t been hit by a car as you might guess. He had been shot with a bow and arrow. The arrow was still inside him, piercing his chest through to his posterior shoulder.

Thanks to the quick thinking of this resident who took some photos and immediately contacted Wildcare NSW, the kangaroo survived. Wildcare spent the greater part of the morning securing the terrified roo, safely tranquilising him, and transporting him to West Queanbeyan Vet. It was his lucky day as the arrow missed bone and muscle, however the wound is infected. He’s being well looked after

It is illegal to harm or kill a protected native species. Wildcare have reported the incident to police who also have the arrow in their possession and are investigating.

It is extremely alarming that someone has discharged a dangerous weapon in a Queanbeyan suburb.

Facebook is often criticised as a platform for narcissism and ranting but it can also be a hugely effective community noticeboard. After I saw the story shared by Wildcare I shared it on several Queanbeyan community pages where Ken, a local archery advocate, came forward and will be assisting police in identifying the arrow. Ken will be able to tell police if the arrow came from an archery club in the Queanbeyan/Bungendore region. However, Ken also told us that arrows can be easily purchased at stores in Canberra provided that the buyer is over 16 years of age.

Members of local archery clubs have expressed horror at this incident, appalled that their sport is being abused for animal cruelty, and concerned that an event like this will result in a backlash against the archery community.

Another resident came forward reporting that they had recently found arrows near their fences in Greenleigh. Obviously this is not the first time that a kangaroo or an animal has been shot at in the area.

A few commenters tried to gain traction on a debate of whether we should kill wildlife or not, and that this could be considered the same as the kangaroo cull. A kangaroo being shot with a bow and arrow is a separate issue to a properly conducted kangaroo cull. Shooting any living creature with a bow and arrow is an act of deliberate cruelty, with no reasoning behind it other than for fun or for sport. The comments attempting to rile people up with blood lust was thankfully drowned out by the community’s strong outpouring of concern and outrage that one of our beautiful native animals, a living breathing creature, could have been left to bleed out in a suburban driveway.

t2owe - 6 hours ago
It's not the outdated system that's the problem, its the failure of Planning (ACTPLA) to maintain the mandated rules in the t... View
News 3

HiddenDragon - 7 hours ago
Difficult to see anything more than token efforts at decentralisation in future, but video conferencing and working from home... View
Food & Wine 27

stargazer - 10 hours ago
I agree. It’s an old fashioned bakery and the fact it’s totally family run is fantastic. They are few and far between now... View
stargazer - 10 hours ago
Stopped in and got my buns today - they were worth the drive! But I Wish I could get them on my side of town! Kids loved them... View
Sonya Curran - 14 hours ago
I'd love to! Have never been! View
News 1

chewy14 - 10 hours ago
Hardly a surprising result, the government's relative silence on the issue and the budget allocation made it pretty obvious t... View
News 12

Trish O'Connor - 13 hours ago
is there a phone number to call each morning to check whether the balloons will be flying. View
Food & Wine 1

Conan of Cooma - 14 hours ago
I was an extra for the final scene in this movie. Leah is not only a bloody hilarious person but also an incredibly intense a... View
Food & Wine 71

Connie Senkoe - 16 hours ago
any body heard of Librafg with Nick Gibson. Is it a scam too? View
Community 24

@The_RiotACT @The_RiotACT
Once known for its huge freakshakes, Patissez used lockdown as a chance to reinvent itself and forge an exciting new path https://t.co/vQDR61q0DX (8 hours ago)