‘Keep yourself to yourself’: Health Minister warns parliamentarians, staff against partying in ACT 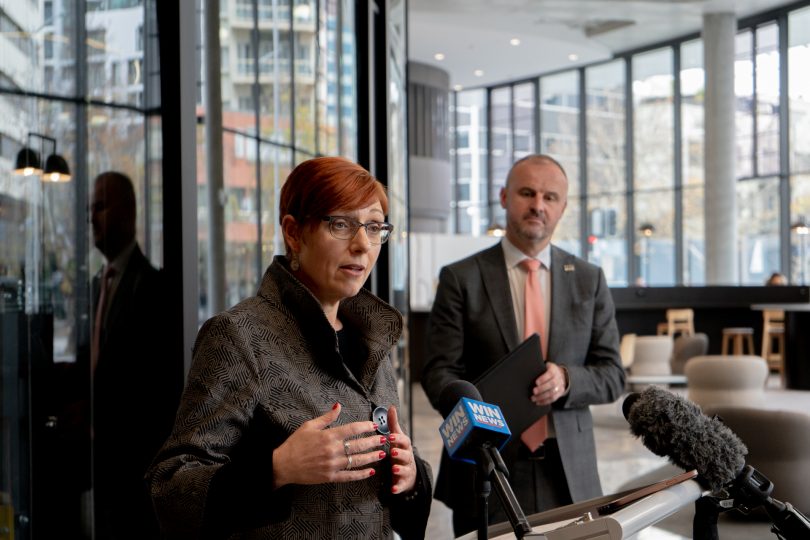 Health Minister Rachel Stephen-Smith has told people travelling to the ACT for parliament to “keep yourself to yourself as much as possible” and avoid partying while in Canberra.

The workforce in Parliament House swells to around 5000 people each day during sitting weeks, and MPs and Senators travel with their staff from all over the country.

There is concern that the upcoming sitting weeks, which recommence on 3 August after the winter break, could become a superspreader event with people travelling back to every Australian jurisdiction.

Ms Stephen-Smith said people from Greater Sydney who want to attend parliament should already be in the ACT undertaking their quarantine period.

There is confusion about COVID-19 rules with directions and health measures from multiple sources, including the ACT’s Chief Health Officer, the Commonwealth’s Chief Medical Officer, Parliamentary Officers and individual political parties.

But Ms Stephen-Smith said all incoming parliamentarians and their staff would need to abide by the ACT’s restrictions.

“Everybody here has a level of responsibility. My message to MPs, to Senators and to their staff is if you are coming to the ACT, please keep yourself to yourself as much as possible.

“Maintain your physical distance from people you do not work directly in an office with, and please do not go out partying in the ACT. Minimise the risk as much as possible.”

Political parties would also be cognisant of their responsibilities and should be sending messages to their staff to avoid going out in groups, socialising and gathering for events, she said.

READ ALSO: It’s taken a decade, but I’m no longer embarrassed to have stayed in Canberra

Ms Stephen-Smith also took a jab at Prime Minister Scott Morrison for holding a press conference without a mask yesterday (22 July) despite being subject to some restrictions after ACT Health granted him an exemption to travel to Canberra.

“I have to say, I probably would not have chosen, if I was the Prime Minister, to have a press conference without a mask on,” she said.

“I am aware that the Prime Minister got specific advice from the Commonwealth Chief Medical Officer about the various activities that he was going to undertake under the exemption from quarantine, and that did include specific advice about the conduct of press conferences.

“[But] in this situation, he is the person in quarantine, so it was great that everyone else was wearing a mask … and I am sure there was a reasonable amount of distance from those journalists asking questions.”

Almost a given they will bring Covid to town

We don't want them here at the best of times. Tell them to stay home. They threaten our Covid free status and therefore the freedom of movement we currently enjoy. It is inevitable that they will bring infection. In other words F off

So... we'd advised not to go to the snow or the coast (no known covid) but the pollies & staffers are ok to come here. Hmmm

“Keep to yourself as much as possible” sounds scarily similar time Gladys Berejiklian’s Sydney mockdown.

Stay away. You all know how to use Zoom now.

If the Delta variant is as serious as the political class constantly tell us (and thus justify destroying the livelihoods of many with severe, protracted restrictions), and with vaccination rates still well below where they need to be, it’s difficult to understand why the federal parliament could not and should not run on the much reduced numbers which applied last year.

Definitely agree that a virus with a fatality rate of 0.2% (pre vaccine) and now with an apparently safe and effective vaccine, requires that the processes of the commonwealth government be suspended.

To the NIMBY’s on this site – The city of Canberra was built specifically for the federal government to run the rest of the country from. If you don’t like it – move!

Gladys will have all of Australia in lockdown soon. WTF are we letting them in

You’ve got to be kidding, don’t come.

Would it be possible to attend remotely? Half our country are working from home so surely our politicians can too

Why aren’t all the MP’s abiding by the rules in their own State that they expect all of their constituents to do?

If we have been working from home since day one, why can’t they?

Can’t they do zoom and stay home

A joke and we will suffer for it

I think it's unnecessary for any of them to be here. Choof them off back to where they live and work from home. Lots are still doing it.

They've all got access to shower facilities and offices. If they must be here, they should bunk in Parliament house. There's plenty of catering.

JC - 10 hours ago
Problem with the medical world is balance or probabilities doesn’t cut it. How many times do you read of people who have be... View
JC - 11 hours ago
The only problem with your theory and quoting the average age of deaths, is those deaths have happened in an environment of r... View
phydeaux - 13 hours ago
While reading here, I noticed that among the usual weird facebook views there was a journal reference, so I looked it up. Dea... View
News 39