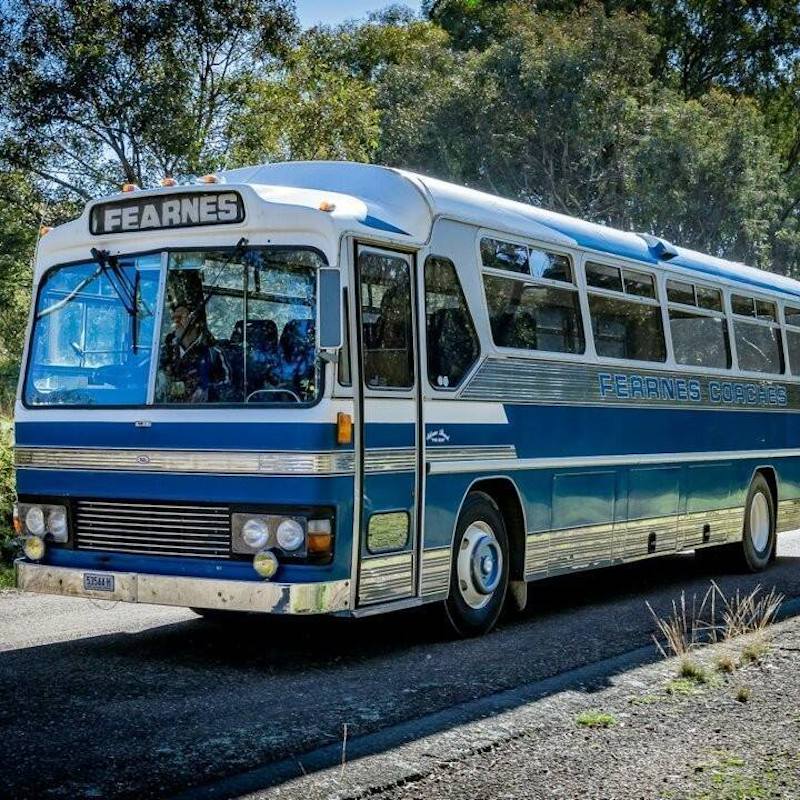 The old bus polished to its gleaming best. Photo: Supplied.

An antique fire truck ignites a little boy’s imagination but an old school bus rekindles memories for everyone. A mechanic and former school bus driver Ken McKay can rattle off routes into Harden-Murrumburrah, the families along the way and the remarkable journey of a 1958 British Leyland Worldmaster.

The old bus will line up at Harden Historic Truck and Tractor Club show on Sunday, 15 March, gleaming in defiance of the marathon distances it has travelled.

After decades in South Australia, it went to Wagga Wagga where the Fearne family extracted many more miles carrying army and air force recruits from Sydney to the local bases for training. Ken began work on it when Fearnes sent it to its Harden depot. The old body was stripped off and the vehicle re-powered with an 8.3 litre, 4-stroke General Motors engine. Then Gary Fearne drove the re-worked vehicle to Custom Coaches in Sydney for a body re-fit.

He sat on little more than a chassis with a seat and steering wheel attached with no windscreen to protect him from bugs, only a full-face helmet.

Back in service, it was used as a coach, then a school bus, completing its commercial career on the Binalong-Harden route before breaking down. By this stage Ken had stopped driving and was running his own automotive business.

“They tried to repair it, but those buses were an auto orphan,” he says. “This one’s a little bit special in the injection firing, you needed to know what you were playing with to get it correct. This one’s got a five-speed Fuller overdrive gearbox. This was the manual, turbo charged version, 230 horsepower. Not a lot, but enough. It runs along nicely at 110 km/h, though.”

Ken bought it in 2004 for old time’s sake. “It was nice, it felt good, it brought back memories more than anything,” he said. Busy at the time, he knew he probably should not have bought it, but couldn’t say no. He quietly moved it to a mate’s paddock and said nothing more.

“I’d love to know who owns that old coach,” a neighbour, Kevin Sharp, would remark to his wife Sue each time they passed the paddock. A decade passed. Then Kevin and Sue, on a caravan trip with a car club, were yarning one night in Darwin with other members, including Ken and his wife Maryanne, and the question re-surfaced: “Do you know who owns that bus?”

As much as Ken wanted to provide the answer, he faced one more hurdle. Telling Maryanne he had, a decade early, bought the bus. Men might understand why un-loved looking machinery can be parked for another day, but Ken knew he had his work cut out explaining this to his wife. The outcome was apparent soon after, when the blue-and-silver paddock orphan was suddenly cleaned up and back on the road.

“The paint has only ever been polished, not replaced since I bought it,” he says. “The bus had lichen growing all over it when I retrieved it, over the roof and down over the windows, the mossy rock look,” Ken says. “I spent a few weeks scrubbing, cleaning, spraying and polishing and that sheen is the end result. It was the original two-pack [paint and hardener]. Savage stuff that’s killed a few spray painters, but it’s the best two-pack ever made.”

Reduced to seating nine people, the old bus completed many club runs before it changed hands again. Its current owner, Tim O’Keefe, another Harden resident and former Fearne’s employee also belongs to the Harden Historic Truck and Tractor Club. Ken says parting company was not easy. “But I knew it was going somewhere where someone would love it, that’s what it came down to, it was a deal from the heart, not from the wallet.”

The Harden Truck and Tractor Show is on 15 March at the Harden Murrumburah Showground from 9:00 am. It attracts classic machinery from around the country, including the odd school bus or two. Camping is available on-site for $20.