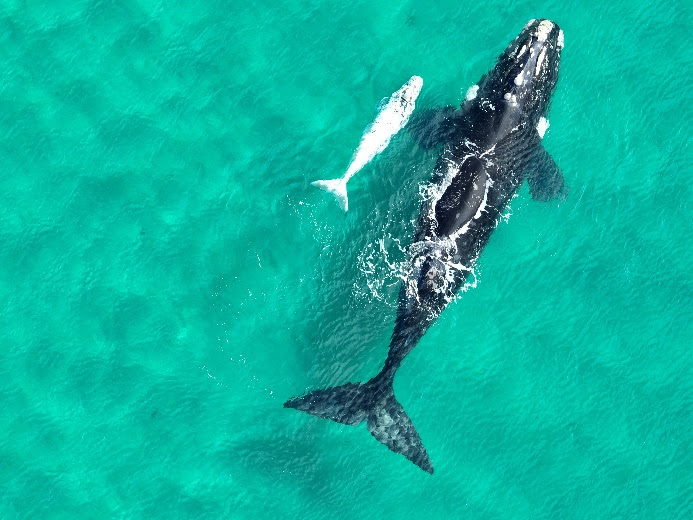 Whale watchers are being reminded not to disturb the mother and baby. Photo: Maree Jackson.

One little whale is whipping up a frenzy on social media, but people are being asked to keep their distance as the rare white whale calf and its mother head down the South Coast of NSW.

Four pairs of mother-and-calf southern right whales have been seen in NSW waters so far this winter – but one pair is copping plenty of attention, particularly from drone operators.

The calf in the pair is mostly white, as seen in vision taken from high above, reminding people of the famous humpback Migaloo.

“Curious onlookers are reminded to keep back and give the nursing mother and calf space to rest undisturbed,” Mr Marshall said.

“A calf needs up to 300 litres of milk a day to gain the weight needed for the 5000-kilometre swim back down to Antarctic waters in the coming month, so both the mother and calf need to be left alone so they can rest and feel safe.”

The calf appears to be white but it is actually brindle.

“Its white areas will darken to grey as it ages,” Mr Marshall said.

“It’s one of around one in 30 southern right whale calves born with brindle colouring.

“This is a rare event to see a virtually white brindle calf, as southern right whales are mostly very dark, although some have splashes of white called a blaze.”

The mother also carries the recessive brindle gene and has pale-grey areas.

It is illegal to approach any closer than 300 metres when a calf is present, if you are on a vessel, including surfboards, paddleboards and kayaks. Drones must legally stay at least 100 m above the animals. 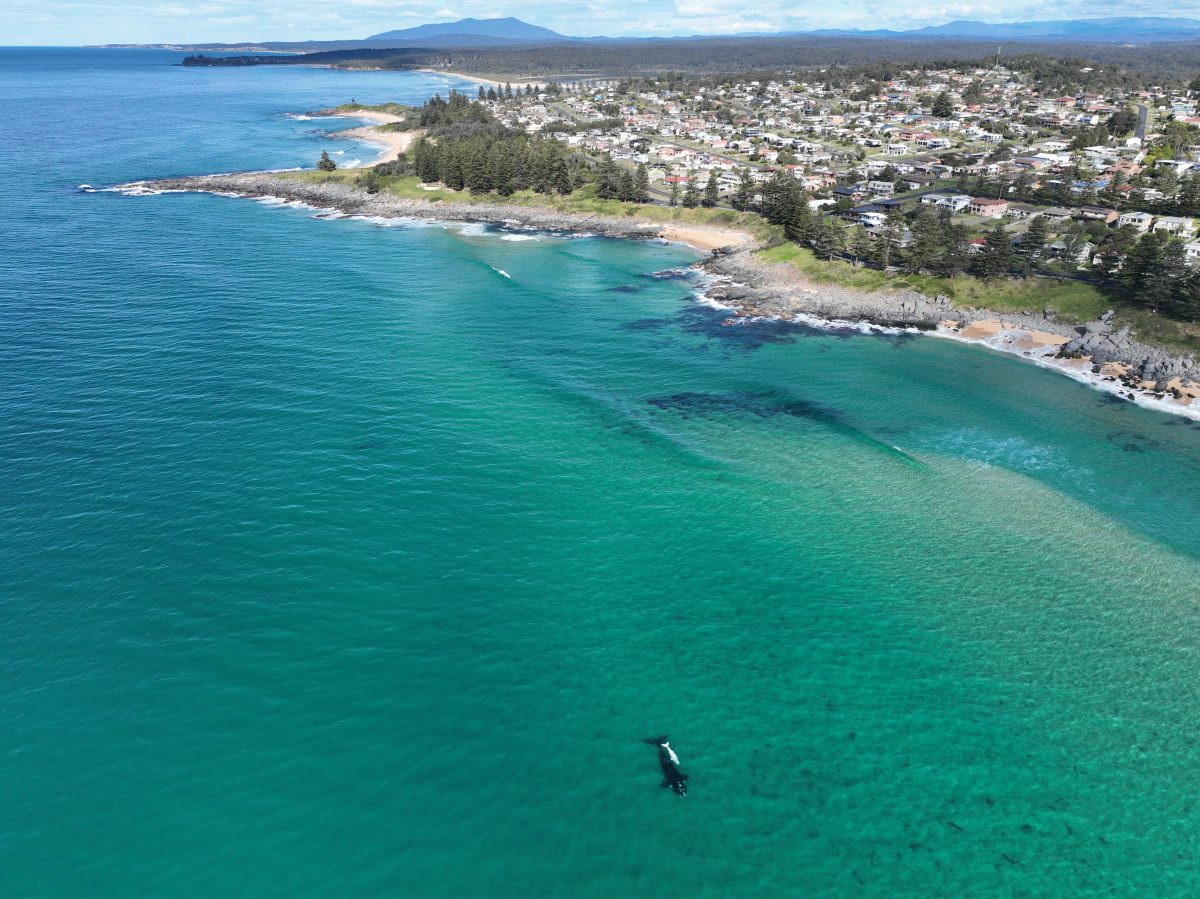 The southern right whale mother and calf have been photographed close to the coast: Photo: Maree Jackson.

The NPWS vision was captured off the South Coast recently by accredited drone volunteer Maree Jackson, from the NSW Government’s Right Whale ID research program to monitor the whales.

Mr Marshall said Maree used her camera’s zoom function from above the legal height of 100 m to capture the white calf surfacing for a breath while swimming alongside its mother.

Her drone approached at 100 m, then used a 7x optical zoom to capture the stunning close-ups.

The Right Whale ID program operates as part of the Marine Estate Management Strategy, working with volunteer drone operators to collect important information about southern right whales to assist in their management, protection and conservation.

The southern right whale is a baleen whale and is easily distinguished from others because of its broad back without a dorsal fin, wide pectoral fins, a long arching mouth that begins above the eye, and small rough patches of skin (or callosities) on its enormous head.

It has dark-grey or black skin, with occasional white patches on the belly. Its two separate blowholes produce a distinguishing V-shaped blow.

An estimated 12,000 southern right whales are spread throughout the Southern Hemisphere, compared with an original population, before commercial whaling, of more than 100,000. However, their numbers are growing at around 7 per cent a year.

They are increasingly seen on the NSW coastline from May to the end of November, and can be found in shallow water including estuaries and bays. They have even been known to swim into the surf zone with their calves.