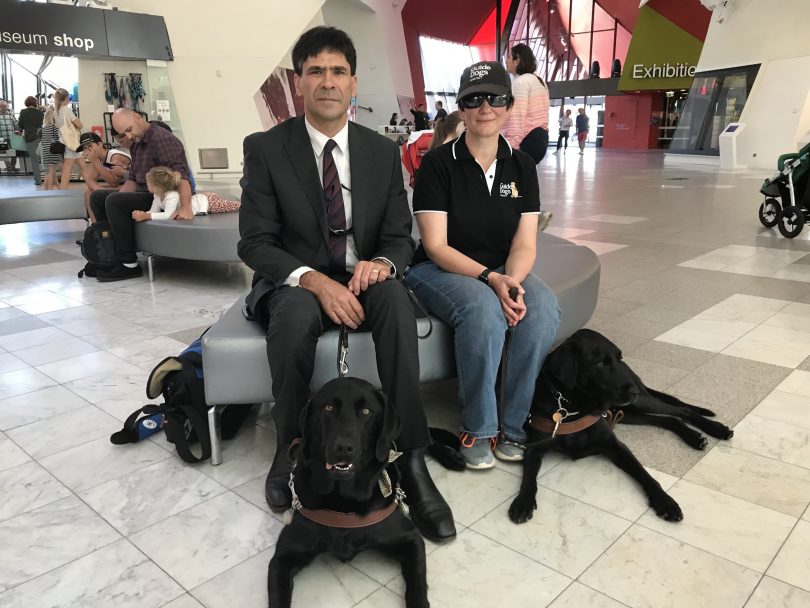 Scott Grimley from Holt and Jo Weir from Yass are pictured at the National Museum of Australia with their Guide Dogs Dudley and Wiley. Photo: Supplied by the Museum.

Scott Grimley from Holt knows what it’s like to be refused access to a service or place because of his Guide Dog.

Declared legally blind in 1998 due to the hereditary eye disease Retinitis Pigmentosa, Scott received his first Guide Dog (a black Labrador named Dudley) 12 months ago and since then has been refused a rideshare service three times and must constantly plan ahead if he wants to go to a restaurant.

Scott is among the one in two Guide Dog handlers across Australia who report they have been discriminately refused entry to a public place or service because of their Guide Dog in the past two years – some more than 10 times.

According to the results of a client survey by Guide Dogs Australia, cafes and restaurants are the main offenders, with 71 per cent of survey respondents reporting a refusal of entry.

Taxis and rideshares are the next cabs off the rank, with 58 per cent of respondents having been refused service, while motels, theatres, office buildings and hospitals were named as other locations where handlers have experienced discrimination.

In addition to outright refusals, an overwhelming 70 per cent of handlers reported they have had to prove their legal right to enter with their Guide Dog, by showing an ID Card or by way of explanation, after initially being denied access.

Scott knows all too well what that’s like, saying he normally has to ring ahead if he wants to visit a cafe or restaurant and let the venue know that he will have Dudley with him. He will then often be told they will arrange a seat outside for him before they check and realise that he is entitled to a seat inside.

But it is the rideshare refusals that have caused him the most problems – sometimes making him late and meaning he has to go through the tedious process of making a complaint.

“I’ve had Dudley for only a year and I’ve already been refused three times by rideshares,” Scott said.

“Being refused access because of your Guide Dog makes you feel excluded and like you’re a second-class or third-class citizen. It also just puts a downer on the rest of your day or even your week.

“You can get quite angry to begin with but later on, after you think about it over and over it can make you very upset.

“It also causes a lot of frustration because in this modern day it shouldn’t be happening. There are legal protections in place but some people still don’t agree with them, or they’re not aware of the laws.”

Scott works as the Access and Inclusion Officer at the National Museum of Australia and says that being refused service can also impact his professional life, for example by making him late for a meeting.

Scott has a wonderful bond with Dudley and said that since receiving him a year ago (after previously using a cane), it has made a big difference to his life.

“Having a Guide Dog has given me a massive confidence boost and a massive independence boost,” he said.

“I’ve had a marked improvement in my participation, in work as well as just my general well-being. I’m not as anxious, not as nervous and I have more confidence to stride out and visit new places. 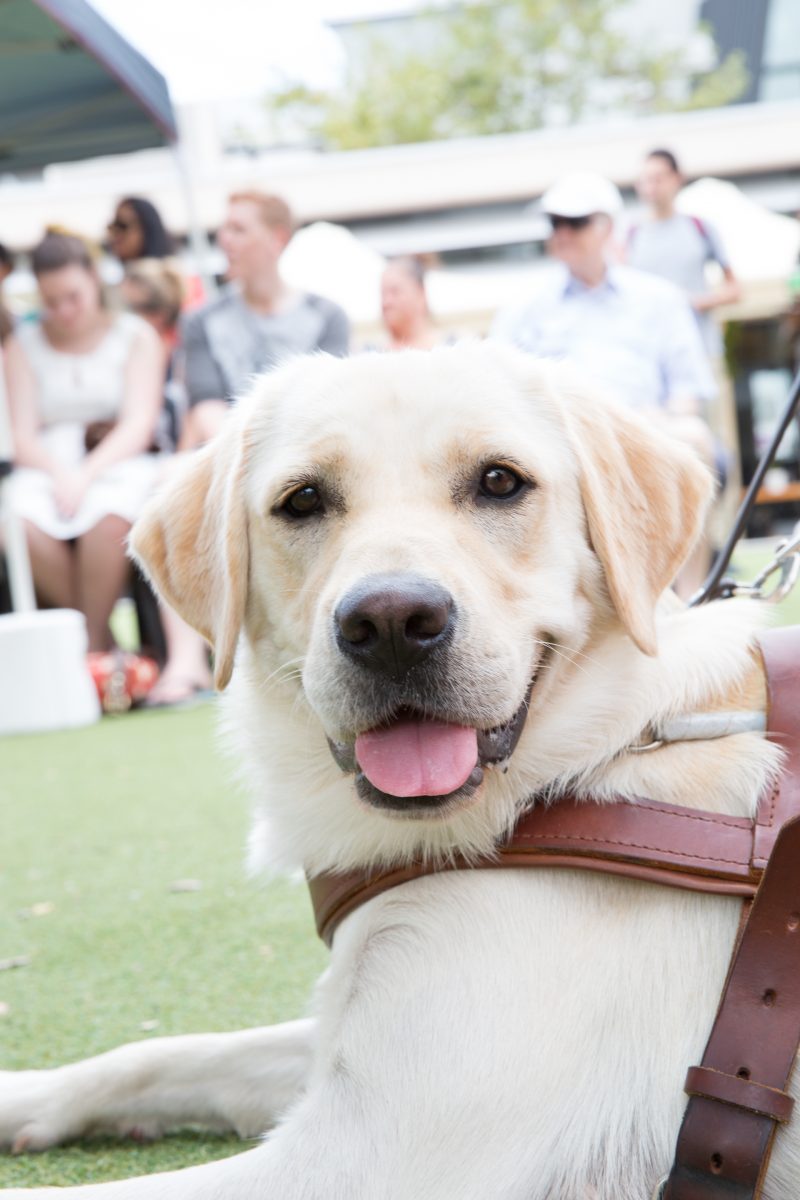 A young Guide Dog in training. Scott said that having a Guide Dog has made a big difference to his life. Photo: Supplied.

“My personal safety has also dramatically improved. My Guide Dog, Dudley, now walks me around those low-hanging branches or objects that I used to knock into when I was just using a cane.”

Scott said that people react in different ways to Dudley but they need to understand and respect that Guide Dogs are legally able to enter public places.

“We all have basic human rights. We all have a right to be part of the community,” Scott said.

In response to the concerns of Scott and others raised in the recent survey, Guide Dogs Australia is running a new advocacy and education campaign entitled ‘Access All Areas’ to remind businesses, industries and the community that a person with their Guide Dog in harness is legally allowed to enter all public places.

Guide Dogs NSW/ACT is also working with the ACT Government on an amendment to the Animal Welfare Legislation Bill, which will include penalties for those who refuse access to Guide Dogs.

“While the public generally do the right thing, Guide Dog handlers continue to face many barriers when going about their daily lives,” said Dale Cleaver, CEO of Guide Dogs NSW/ACT.

“Guide Dogs are not pets. They are highly trained to open up the world for people who are blind or vision impaired, not close it down, which is effectively what denying access does,” Mr Cleaver said.

This makes me angry, frustrated and sad. I think there needs to be a national campaign on social media and TV to educate people about people’s rights who have guide dogs and service dogs and that it’s against the law to refuse these people access.

One of the nicest and smartest people I’ve had the pleasure of meeting.

I’d rather a share space with a working dog an his person then some people . Just saying . So he should sue who ever refused them and I also think peoples needed to be educated about people and there working dogs .

There should be a business employer education program in place. After that if they refuse entry they get fined!

Melinda Parrett This is a really good idea. In fact it is probably the only way to address this issue. There are a few cultural barriers that make it very hard for some drivers to have a dog in their car and these barriers need to be removed so the drivers employment is not jeopardised.

I know Scott and Dudley. Scott works tirelessly for the rights of all to enjoy equal opportunity to enjoy every day, regardless of ability. To see this is appalling!

Unfortunately it is not unusual.

What is wrong with people 😞 .
Maybe they are scared of dogs ??
It not a excuse , but some people are .

I would like to know why , because that not fair .

Isn’t it illegal to refuse service to a person because they have a guide dog.?

My understanding is that it’s a civil rights violation, as opposed to a criminal law violation. That being the case, the only way to resolve it is to file a complaint with The Australian Human Rights Commission.

Don Finley WRONG – It is a summary offence in both the ACT and NSW. Police can be called and in NSW they will attend. In the ACT, they are a bit more lazy. https://www.bca.org.au/dog-guide-access-legislation/

If the rideshare company was uber this should of been reported to them .
The driver would of been taking off the platform immediately . There is also uber assist which is there for this purpose and this would not of happened.

This is awful. I’d be willing to offer a lift for when Mr Grimley needs it.

I’m not sure what people think a guide dog is going to do. It’s probably better trained than a lot of humans I know 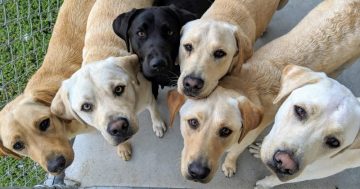