Legends Unite for State of the Union 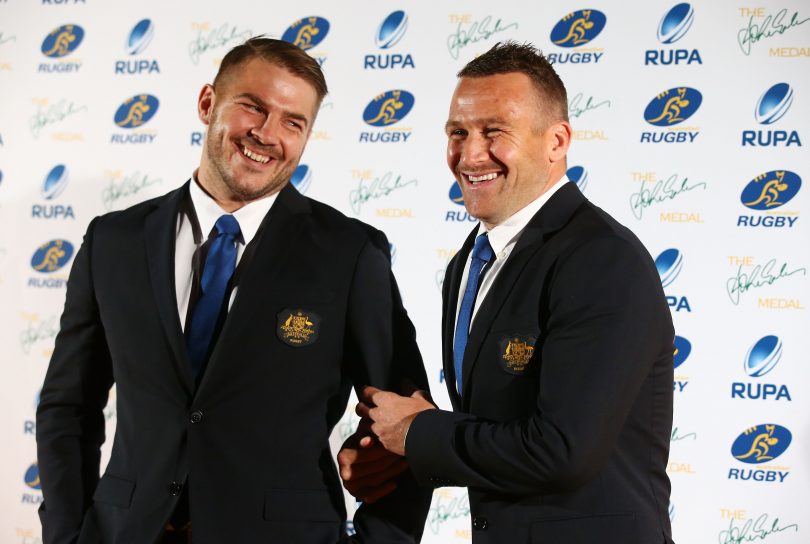 Some of the biggest and most entertaining personalities in rugby will be part of the Plus500 Brumbies Annual State of the Union Lunch on Friday 27 April, with Matt Giteau, Rod Kafer, Drew Mitchell, Sharni Williams and Louise Burrows joining guests at the QT Hotel for a star-studded panel discussion.

Giteau, Kafer and Mitchell will join our MC, Fox Sports Rugby presenter Nick McArdle, in a discussion of the men’s game in Australia, while Williams and Burrows will lead the discussion on Women’s rugby.

The largest annual sports corporate lunch in Canberra will also feature recently appointed CEO of Rugby Australia Raelene Castle, as Guest Speaker, whilst guests can enjoy a three-course lunch complete with beer and wine and bid on some amazing auction items.

Historically one of the pre-eminent sporting gatherings in Canberra and traditionally a sell-out, the State of the Union Lunch is the major fundraiser for the ACT/Southern NSW Community rugby program, which is an integral part of the Plus500 Brumbies, and with a glittering array of talent on the discussion panels, is sure to be an event not to be missed.

The five confirmed panel members have a wonderful pedigree in the sport, having enjoyed hugely successful careers.

Locally born and raised Matt Giteau is part of a select group that has claimed the double of winning the Southern Hemisphere Super 12 competition and a Heineken (European) Cup in the Northern Hemisphere, the former with the Brumbies in 2004 and the latter with RC Toulon in 2013, one of only five players globally to achieve this feat.

After a career with the Brumbies that spanned two-spells either side of a stint with the Western Force, Giteau moved to Europe and played over 100 games for a star-studded RC Toulon. An alumnus of St. Edmund’s College Canberra, Giteau was capped 103 times for Australia and last year played for Suntory Sungoliath in Japan’s Top League.

Like his colleague Giteau, Rod Kafer enjoyed a storied rugby career with the Brumbies, having played 37 times for the ACT club and scoring half a century of points. Internationally, the bustling centre/flyhalf was capped 12 times by Australia, making his debut in 1999.

A former pupil of Canberra Grammar School, Kafer was the first player to receive winners medals from the major Southern and Northern Hemisphere rugby tournaments, the Super 12 with the Brumbies in 2001 and the Heineken Cup with the Leicester Tigers in 2002.

Drew Mitchell enjoyed a glittering career in Super Rugby and on the international stage making over a century of appearances in Super Rugby and being capped 71-times for the Wallabies. Mitchell played for the Reds, Waratahs and Force in the premier Southern Hemisphere competition before finishing his playing career at RC Toulon.

Mitchell made his international debut for the Wallabies against South Africa in 2005, after being selected following a season with the Queensland Reds in which he scored 11 tries and was named Australia’s Rookie of the Year. Mitchell holds the distinction of being Australia’s leading try-scorer in Rugby World Cup history.

Sharni Williams OAM is one of the finest Women’s rugby players of all-time, making a name for herself as a world-class talent in the sevens form of the game as captain of the Australian Women’s Sevens team. Born in Batlow, NSW, Williams played club rugby in Canberra for the Royals club as a centre and the Brumbies Women, as well as gracing the international arena at the full-sided version of rugby.

She was awarded ACT Rugby Rookie of the Year 2008 and Australian Women’s Player of the Year 2010 and was an Olympic Gold Medallist at the 2016 Summer Games in Rio. On Australia Day 2017, Williams, along with her successful sevens team mates, was awarded an Order of Australia Medal.

Wallaroos international Louise Burrows has been a mainstay of the Women’s rugby scene in Canberra for many years and has reached the pinnacle of the sport having represented Australia at four Women’s Rugby World Cups, including the latest of these in Ireland last year.

Burrows, a combative and hard-running hooker, was part of the inaugural Brumbies Women’s Buildcorp Super W team and claimed a try in the win over the Rebels earlier this season. A former representative track cyclist, Burrows juggles the demands of rugby with a family and her teaching commitments at Canberra Girls Grammar School.

What: State of the Union Lunch

Micki Beckett - 8 minutes ago
ACT - and border roads - need more speed cameras. The Federal Highway is a free-for-all View
Joe Seph - 27 minutes ago
My daughter came up with a solution get egg shells fill them with poo and throw them at cars being dangerous View
Mark Katalinic - 48 minutes ago
When nobody enforces the road rules what do you expect? View
Property 20

Irene Kelly - 26 minutes ago
What happened? View
Tim Van Der Vlist - 4 hours ago
No discounts for the members for resigning is a disgrace. They have to play on a mediocre (at best) course for 6 months and s... View
Eamon MacDonnell - 6 hours ago
Rowan Kemp Mark Furry Andrew Thorne stills a ways off View
News 17

tfx1 - 50 minutes ago
Why is it Canberra people do not understand risk analysis. Some simple numbers to demonstrate the effect of this big battery.... View
Capital Retro - 3 hours ago
Don't speculate on unknown unknowns. View
Property 32

John Moulis - 1 hour ago
AstraZeneca is a dog and I got it straight from the horses mouth. I went for my first jab today and I told the nurse that I h... View
Community 2