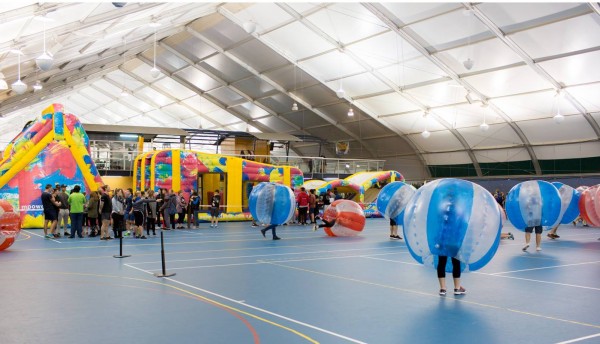 The Canberra Liberals will use a motion on the first ACT Legislative Assembly sitting day for 2017 to call on the ACT Government to take immediate action to ensure that popular Fadden indoor sporting facility and birthday party venue mpowerdome can reopen ten months after it closed citing unsafe and inadequate parking.

Member for Brindabella Andrew Wall said mpowerdome was one of the ACT’s most important sporting venues and that the Government should work with the owners and managers to ensure Canberrans could access its facilities. The popular venue for indoor sports and birthday parties has been closed since last April, citing unsafe and inadequate.

“The mpowerdome has operated as Canberra’s leading venue for sports; including tennis, soccer, netball, volleyball, handball and modified sports for many years and in recent times has seen an average of 144,000 people through its doors who are all in the pursuit of an active lifestyle,” Mr Wall said.

“Even the ACT government’s own report has recognised that the mpowerdome has played, and could continue to play a vital role in the pursuit of the objectives of increasing the ACT community’s physical activity levels, from social through to high performance participation.

“Successive ACT Labor/Green governments have been well aware of the parking constraints facing the operators and have even cited the parking issues as an impediment to the future of the operation in separate reports.

“There is a simple solution and it’s time the Minister sat down with operators and managers of the mpowerdome and worked with them to ensure the continued viability of this important and iconic Canberra sporting venue.”

During the ACT election campaign last August the Canberra Liberals promised $300,000 for improved parking facilities in the Fadden Pines area to ensure mpowerdome could re-open. It was one of the few promises Labor did not match.

At the time, the owner, Gail Aitken said the commitment would mean mpowerdome could re-open if the Liberals won government.

She’d said previously that mpowerdome’s efforts towards reopening had been “continually thwarted by the inadequate parking situation”.

On April 7 last year, mpowerdome published the following note on its Facebook page:

Dear Patrons and Friends,
Your loyalty throughout this final term has been an awesome experience for us all and right now the reality is hitting hard that the 9th April is almost here.
Firstly, I am confirming there will be no activities or services in term 2.
Secondly, I have been asked by the owners of the facility to advise you that there continue to be unresolved matters with the ACT government and that they may require a loud community outcry (e-petition) to take the matter forward.
Therefore, would you please take a moment to send your thoughts concerning the value of the mpowerdome facility to the community to customerservice@mpowerdome.com.au by 30th April so that these comments can be placed before the appropriate local and Federal members.
Thirdly, you will receive an update on how the above two matters are progressing during term 2.
And finally, a huge thank you for the many wonderful memories we have of the past ten incredible years. It has been one heck of a privilege to share the journey with so many. Hoping we see many of you roundabout Canberra.
Gail Aiken
Managing Director

Have you or members of your family participated in sporting events at mpowerdome? Have you attended or held a birthday party there? Did you have any parking difficulties? Do you think the ACT Government should intervene to resolve the parking issues?

This is what gets me about Green supporters in the ACT. They are different to the true Greens in rural Tasmania or say around Eden or Gippsland.

When Government money needs spending out in the outer Canberra Suburbs they argue about the need to spend government money wisely and that businesses like the M Powerdome need to be able operate independently without taxpayer support.

However, any Government funding for transport, facilities and hipster businesses in the inner areas where the core powerbase Greens representatives live is all OK and the taxpayer dollars spend is needed for a better city.

Canberra Greens do not actively support and fight for low socio economic people in Chisolm, Kambah, Richardson, Higgins and Charnwood.

The mpowerdome might be potentially popular for Tuggeranong residents, but the ACT government has funded the even more popular AFL, Tennis and Hockey to the tune of tens of millions of dollars.

It’s a bit false to make it sound like this is a one off sports funding decision. Government is ploughing millions into Rattenbury and Barrs backyards for sports complexes. Try visiting the tennis centre.

I totally agree with Andrew Wall MLA that Sporting Facilities should be supported and provided by Government to satisfy the demands from the public for such venues.
It should not be a question of will we or won’t we, but “How can we bring this facility back to life and improve the quality of life and health of residents in the Tuggeranong Valley. ” I wrote this article in November last year http://the-riotact.com/tuggernong-valley-residents-the-big-losers/187735 to try and find out what is going on with MPowerdome and there were plenty of responses but not a word was said by Labor or the Greens – Why Not? Sport plays a very real important part in our society and this venue was one of the best providing so much variety for so many.

If it was in gungahlin it would have a first class car park right now.
Sadly we live on the wrong side of the lake and the wrong government is in power.

OldMan Wyatt - 45 minutes ago
I have always preferred chocolate rather than seafood at Easter View
FishCo Fish Market - 2 hours ago
Thank you for your lovely feedback. Anna truly loves what she does and this will mean a lot to her. :)... View
Michelle Littlewood - 5 hours ago
FishCo Fish Market Thank you for your fantastic service and exceptional seafood. Anna was wonderful when placing my order, an... View
News 53

Nicole Thomson - 2 hours ago
Becky Cormack if it’s In a format for a random person to engage with (which it Isn’t) Plus schools are indicating it will... View
Natalee Gersbach - 3 hours ago
If only we had NBN, working from home and kids schooling from home might not be such a huge issue. Almost our entire suburb h... View
Nicole Thomson - 8 hours ago
and the fact that every school is doing online differently wont be a problem, particularly for younger kid’s? For kids who... View
News 32

Sair Rah - 5 hours ago
Nobody has asked me what set up we have in place with two primary school kids at home. My original email requesting a loan de... View
News 5

MERC600 - 6 hours ago
Today the local paper today reports ''The number of patients in Canberra Hospital has dropped in the past day but three remai... View
me heretoday - 8 hours ago
I understand in times such as these that 'needs must' but in all honesty I do not want to die in a tent on Garran oval in the... View
Community 13

jima - 12 hours ago
Could have told you this sort of thing would happen when it was sold 20yrs ago. Privatisation at its best. View
News 16

Paul Dowden - 12 hours ago
Laurence Kain I was there. View
Best of Canberra 3

Canberrans have been warned not to become complacent and that they are in for a long campaign against COVID-19, as...
News 53

It will be a brave new world for ACT public school students next term, with classes delivered online whether students...
News 1

A frustrated Chief Minister is desperately trying to get Canberrans to heed the warnings from the South Coast to stay...
Opinion 45

@The_RiotACT @The_RiotACT
The Easter weekend is here, and with it the autumn chill. Here are our favourite ways to keep busy while rugged up at home https://t.co/JFivLzP5pT (52 minutes ago)

@The_RiotACT @The_RiotACT
A line on the map is preventing Canberra Relief Network food hampers from reaching people in need in Queanbeyan & beyond https://t.co/l2P3WUD7nQ (2 hours ago)

@The_RiotACT @The_RiotACT
Canberra Airport has rejected claims it is using the cover of the COVID-19 emergency to shut down a runway used mainly by small aircraft operators as part of its long-term development ambitions https://t.co/xOb85cRlRN (4 hours ago)