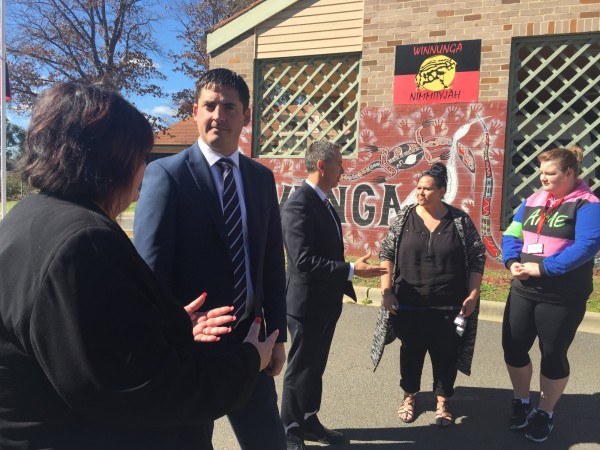 The Aboriginal flag flew at half mast as the media gathered today to report on a Canberra Liberals election promise to spend $1.8 million on 10 new social workers for the Winnunga Nimmityjah Aboriginal Health Service and to reassign existing funding to begin planning a new facility for the service at their Narrabundah premises.

One attendee told the RiotACT that the flag has been at half mast almost weekly lately marking the passing of members of the indigenous community, often at a relatively young age. Another spoke of the need to support dozens of struggling families to prevent their children being taken into care.

“We see the most vulnerable in this community, that without our service, they’d probably die on this street, or they’d turn up at the emergency department in the hospitals, they’d become aggressive and they’d probably end up in the prison system.

“We’re not about that, we’re about keeping people safe, making sure the kids are safe, and doing what we can to bring those most vulnerable people in the community with us.

“Health underpins everything, we talk about employment, education, housing, getting kids to school … if you haven’t got good health, it’s very difficult to do any of them.” 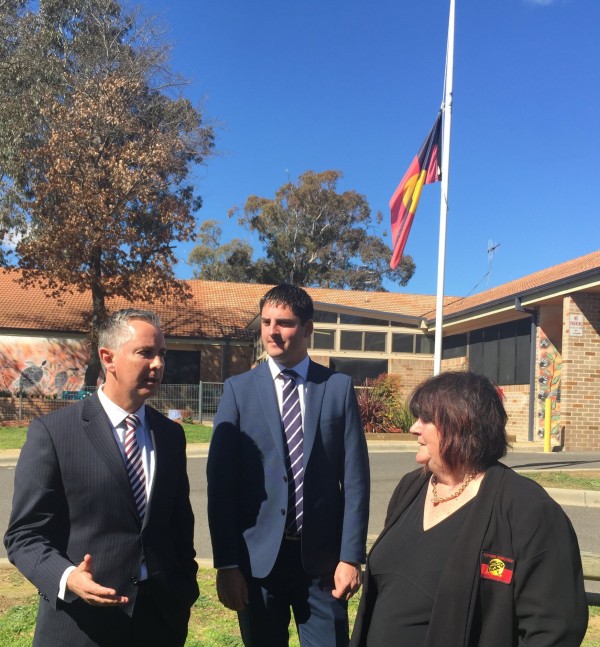 Ms Tongs said the service struggled to meet the needs of its 6000 clients.

“Our building isn’t fit for purpose anymore. Winnunga should be at the same level as all other ACT purpose-built health centres,” she said.

Shadow Minister for Indigenous Affairs Andrew Wall said the boost to social worker numbers would ensure a more even distribution of the case workload.

“The added capacity will assist in responding to the continued increase in demand for services relating to matters such as Care and Protection, legal issues, housing/homelessness, safety/domestic violence, access to mainstream services, intergenerational trauma, cultural identity, social and emotional health and wellbeing,” Mr Wall said.

“The Canberra Liberals believe that better services will equate to better outcomes for the ACT’s Aboriginal and Torres Strait Islander population. A boost to frontline service delivery will assist in identifying issues before they hit crisis point.”

Opposition Leader Jeremy Hanson said Labor had done nothing to address an unacceptable situation for the territory’s indigenous citizens.

“As one of the most affluent cities in our nation there is absolutely no reason that our indigenous community should be experiencing the same issues as those in regional and rural parts of our country,” Mr Hanson said.

“Today’s commitment represents our plan to leave no one behind.”

The accepted paradigms seem to be changing. A decade ago we wouldn’t have expected “brand Labor” to be pretty much perceived as “Developers on Steroids”, and “brand Liberal” to involve Indigenous health.

One thing missed by many is that a name doesn’t imply what something is. Labor might have meant something back in the day or means something on a national level. However Act Labor are basically a party to a local council. Local matters are far different to unions.

Winnunga Nimmityjah is a key part of life for many Canberra people, they offer great service. Health is more important than transport.

The accepted paradigms seem to be changing. A decade ago we wouldn’t have expected “brand Labor” to be pretty much perceived as “Developers on Steroids”, and “brand Liberal” to involve Indigenous health.

Annie Wyer - 40 minutes ago
Mark Ryan actually no, I don’t. But it sounds like you’re a liberal voter who hates contributing towards the common good,... View
Margaret Freemantle - 1 hour ago
Got to be kidding to vote Libs in Canberra!! View
Mark Ryan - 4 hours ago
Annie Wyer sounds like you know someone who got let go from an over inflated over funded lazy parks n gardens service. Vital... View
News 4

Janice Clemson - 1 hour ago
And , yes, we do have excellent water quality 😀🐾🐾🦮🐕‍🦺🦮 View
Janice Clemson - 2 hours ago
Plastic bowls not as easily cleaned as stainless steel. View
Opinion 19

@The_RiotACT @The_RiotACT
From an all-local lineup bushfire benefit show to Abbey Road Live, here are the gigs worth catching in #Canberra this week https://t.co/ga0VbqGlcI (47 minutes ago)