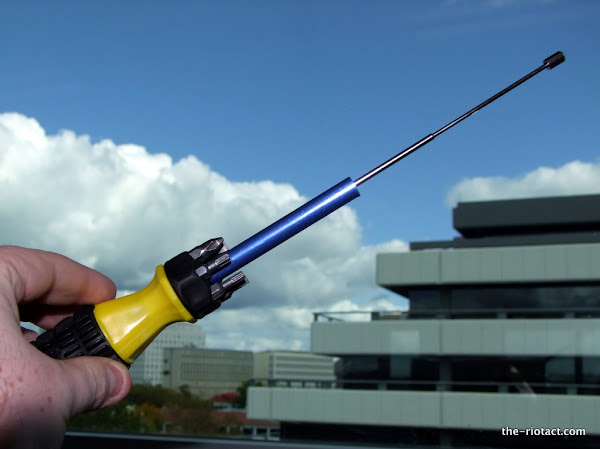 Last friday I needed a phillips head screwdriver (to open the battery compartment on the remote control of a toy helicopter as it happens, such is life in the Riot offices).

On descending from The Eagle’s Nest to seek one out in Civic I discovered that the city IGA does not sell such a tool. Supabarn was no more helpful.

I was on my way to Target when I decided to try one of the “bargain” stores (I think it was “Top Bargain” but who can tell the difference between them?).

Which, it transpired, was selling a prince of screwdrivers. Six interchangeable heads and an extendable magnetic probe.

Which explains why a simple phillips head screwdriver is no longer sold individually in Canberra despite being one of the foundation tools of our industrial society.

Truly an age of miracles and wonders.

9 Responses to Life without screwdrivers
Filter
Showing only Website comments

I *had* one of those, broke 4/6 heads in a few months and threw it away. Great for odd jobs but for serious business you need serious tools, I went to Academy on thursday night and got a whole bag of serious tools really cheap.

I got a slightly more expensive one from Bunnings about 5 years ago. It’s kept under the kitchen sink for occasional odd jobs that don’t require my toolbox, and it’s still going strong.

That people would even bother to point out that these aren’t tradesman-grade tools probably says a lot about the level of expectation set by tradesmen in this town. And most other towns.

I’ve been using one of these beauties around the house for years … perfect for releasing, say, a battery compartment on, say, a toy helicopter. Still got all 6 bits. Yay.

Agree re. the glut of tools in Civic.

I *had* one of those, broke 4/6 heads in a few months and threw it away. Great for odd jobs but for serious business you need serious tools, I went to Academy on thursday night and got a whole bag of serious tools really cheap.

In Civic I would have gone straight to BIGW’s hardware section.

Look out the wondow, I am waving to you as I type this……

those cheap screwdrivers won’t last long, particularly the little jewelers ones they sell.

Go to magnetmart/bunnings/supercheap/repco for screwdrivers.

Dr Who eat your heart out!

There are way too many tools in Civic.