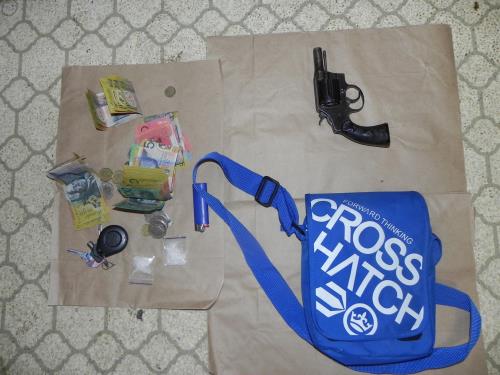 About 10.20am Members from ACT Policing’s Criminal Investigations Team, conducted a search warrant under section 187 of the Drugs of Dependence Act 1989.

During the execution of the warrant, police seized a loaded .32 calibre revolver, a Harley Davidson motorcycle and a Yamaha trail bike.

Also located were amounts of suspected illicit substances including methylamphetiamine, cocaine and cannabis.

A number of property items suspected to be stolen were seized including a large number of laptops, tablet devices, and mobile phones, and a sum of cash.

ACT Policing urges anyone who may have information that could assist police to contact Crime Stoppers on 1800 333 000, or via act.crimestoppers.com.au and quote reference number 5825417. Information can be provided anonymously.