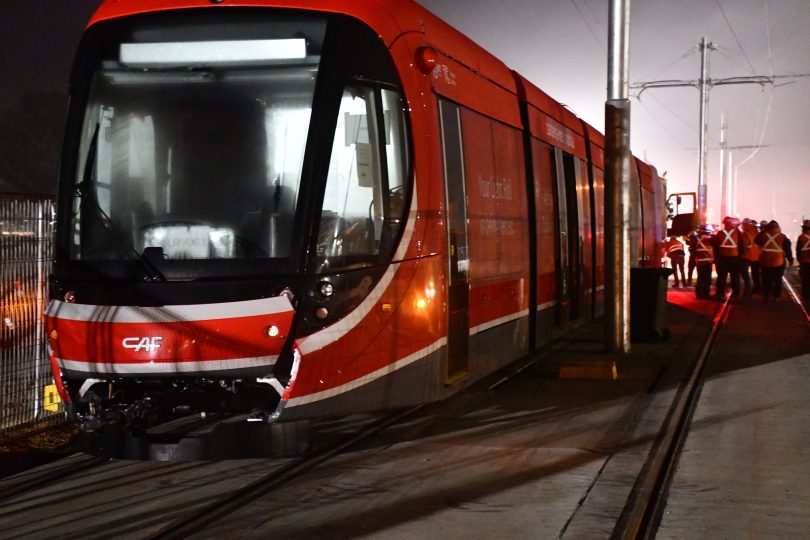 Local college students will be the voice of the first 13 light rail stops. File photo

Year 11 and 12 students from the four colleges along stage one of Canberra’s Light Rail route have an opportunity to be chosen as the voice of light rail.

Students from Gungahlin College, Daramalan College, Merici College and Dickson College are auditioning for the pre-recorded public announcements of the 13 light rail stops.

Transport Minister Meegan Fitzharris said that the vision is for the ‘voices’ of the announcements to belong to students of the school who have supported the light rail project throughout construction.

“We are very excited to be partnering with these schools and the students so they can be part of this historic moment in Canberra,” Ms Fitzharris said.

“This is a great opportunity for local students to get involved and become one of the voices of our future public transport system.”

Canberra’s light rail has started daytime testing and can be seen running down Nullarbor Avenue, Harrison and will soon travel towards the depot in Mitchell. Transport Light Rail Stage 1 Project Director Meghan Oldfield said construction was still on track for December completion.

From the submitted recordings, a shortlist of eight voices will be chosen to compete in the final audition and the finalists will be invited to attend a special live reading in front of a judging panel.

Between two and four students will be selected and the winners’ voices will be then be recorded for the official light rail announcements at a later date, ready for the start of operations.

Just as well, their grandchildren will still be paying off the loan in 2080…

As a regular visitor to Ghent Belgium I use the great light rail system there. The stop announcements are normally in proper Flemish Dutch but during the Ghent music festival (Genste Feesten) in July the announcements are made in strong Ghentian dialect for two weeks.
Quite amusing to listen to.
Maybe a similar approach could be done for the Canberra light rail during special events.
Boganese for the Summernats, or something florally for Floriade?

Or something colourful for Andrew Barr?

Peter Hatfield - 20 minutes ago
Or just go to the Jollimont and catch a comfortable coach and be in Sydney an hour faster, and at a fraction of the real cost... View
Greg Myat - 3 hours ago
Ross McConchie I agree with you entirely about using rail more to get trucks off our main routes. But trains are the most eff... View
Gail Annette Tregear - 4 hours ago
Canberra Airport has mow come of age but the Railway Station is much as it has always been. Most visitors don't know it exist... View
Opinion 49

Donna Hofmeier - 23 minutes ago
Why ? NSW Rugby have never been kind to us. View
Jay Annabel - 3 hours ago
If the emus don't mind travelling, why not? View
Matt Fallon - 5 hours ago
Dunx Fallon i rckn both View
Property 12

@The_RiotACT @The_RiotACT
The new #VaxTheNation campaign is urging Australians to get the jab for COVID-19 so music venues can return to hosting gigs and delivering live #entertainment https://t.co/lo3ejx179F (44 minutes ago)