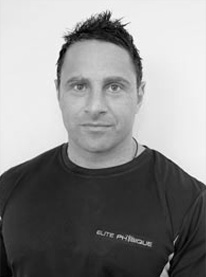 Billy Giampaolo is an elite level powerlifter, a former Mr Australasia body building champion and the founder and executive director of one of Canberra’s most successful gyms, Elite Physique.

Billy started lifting weights when he was 13 and has an overseas world class deadlift personal best of 372kg. He says that he decided to open a gym because he wanted to cater to people with a range of fitness goals.

“I found that all gyms had something missing. They were either too serious or too general. I wanted to create something that catered to everyone, whether they were 70 years old or going for a world record,” he says.

He assembled an expert team of trainers, from professional body builders to experienced martial arts practitioners (he describes his team as “the best people, with no attitude”). Since opening Elite Physique in 2005, the business has expanded to include supplements store Elite Supps and Elite Distributors, which distributes sports nutrition products around Australia.

Billy says that what many people don’t realise is that there’s no quick fix for getting fit. While 12-week programs and fad diets maybe effective in the short term, long lasting results come from consistently putting in effort.

“No one comes in and says, ‘I want to be really great at the basics in two or three years’. Nobody wants to learn how to become a master. People want the magic bullet solution, and that’s why there are 2000 different diet and training regimes out there,” he says.

“You could buy a car, or a house, or anything you wanted today, but you can’t get a better physique today. You have to put in the work over months and years. It took you thirty years or longer to get the body that you have, so of course it’s going to take a long time to change.

“What really works is focusing on becoming the best you can be at the basics. Work on the basics of lifting, focusing on your posture, your glutes, hamstrings and abs. If you don’t have strength in those areas, you’ll find that you’re injured more often and it’s harder to achieve a symmetrical aesthetic.”

Billy lists setting the deadlift world record in 2010 and winning the Mr Australasia bodybuilding competition in 2003 as career highlights, but says that he is most proud of helping a legally blind teenager to set the junior Australia record in powerlifting.

“He didn’t just break the record. He smashed it by 40kg. That’s unheard of.”

Love Elite Physique. I had a membership there for years until I moved out of the area, and really enjoyed it. They’ve been running a promotion offering outrageously cheap $5 casual visits – a very good incentive to drive from the inner north to Phillip once a week. Great value.

Billy is awesome, and this article has just reminded me to get my butt into gear and get back to Elite to work on improving my fitness and stamina again. I have a membership going to waste due to pure laziness … time to get back into it!

Julie Macklin - 2 minutes ago
Kylie Tinnock Not from surveys I have read. I trust them better than your prejuduce and you making this up. View
Brian Rutherford - 49 minutes ago
Amy Pendragon name a government that doesn’t. Bicycles were on the road before cars were invented. If you can’t drive saf... View
Brian Rutherford - 52 minutes ago
James Shaw and your $110B doesn’t include the total spend because, for example, it excludes state and local govt funding. R... View
News 18

Christopher Cuba Rabanal - 36 minutes ago
How about a six day week with every Sunday shut. Where everything is closed in a Sunday Sunday is family Day ?... View
Valerie Foster - 4 hours ago
Been talking about that for years. View
Community 44

Sue Sutton - 55 minutes ago
What about Forrest? Surely the median is higher than Griffith etc. Maybe there are not enough properties sold🤔... View
Alex Troy Elsworth Adkins - 2 hours ago
Mat Kenna but Griffith, Red Hill, Yarralumla etc... weren't until now? Yeah right... View
Mat Kenna - 2 hours ago
Alex Troy Elsworth Adkins it's the new additions, Forrest has been in the list for about 10 years. View
News 9

Colin Ball - 58 minutes ago
Why do they get game consoles?it's meant to be a place for punishment not reward, what about the people who have worked hard,... View
Steve Whan - 2 hours ago
Just curious, do instigators of damage have their terms effected due to vandalism caused? I dont know. Just curious. View
Inca Serrated - 4 hours ago
Not a single mention of the conditions that prisoners are living in... Lockdowns, no family contact for over a year, no meani... View
Community 37

Not that long ago, my partner and I were part of the teeming masses of young people trying to get...
News 122