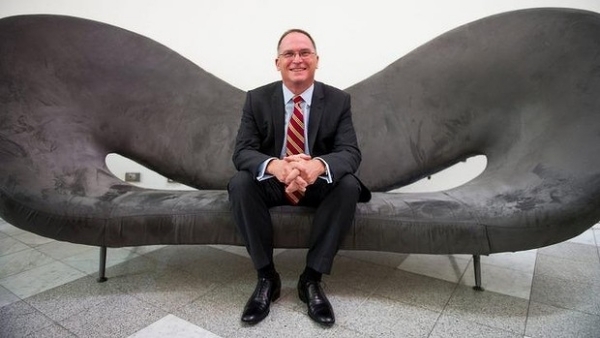 As Canberra slowly bounces back from savage federal spending cuts, the role of the Canberra Business Chamber as a voice for local businesses is more important than ever. We spoke to newly-elected chairman Glenn Keys about his vision for Canberra business.

The Canberra Business Chamber was formed last October as the result of a merger between the Canberra Business Council and the ACT and Region Chamber of Commerce and Industry. Glenn took over from interim executive chairman Tony Henshaw, who oversaw the merger, in February.

Glenn is an obvious choice for Canberra Business Chamber chair. The 2015 ACT Australian of the Year is also the executive director and co-founder of healthcare solution provider Aspen Medical, which is at the centre of Australia’s efforts to combat the Ebola outbreak in West Africa. He’s on the board of the National Disability Insurance Agency, is the chairman of Special Olympics ACT and the founder and chairman of Project Independence, a new housing initiative offering home ownership options for people with a disability.

He brings to his role as chair extensive business know-how and experience, but also understands what it’s like to start small.

“We started our business [Aspen Medical] in Canberra from nothing. We were one of those start from nowhere businesses, so I know what it’s like to be sitting at your dining room table trying to kick off a business and emptying out your mortgage to pay bills and hiring staff from nothing,” he says.

“I get the start up side of the business, but I also get government and exporting because they’re key parts of what Aspen does,” he says.

Glenn says that while the worst of the public sector cuts are behind Canberra, the days of businesses being able to rely on government as a primary revenue source are over. And perhaps that isn’t a bad thing.

He’d like to see Canberra businesses diversify their revenue streams to the extent that when the next recession or round of public sector cuts come around, most businesses “don’t even notice”.

He says both territory and federal governments are getting better at creating opportunities for businesses to grow through accelerator programs, innovation networks and awards that recognise international success.

Personally, he’d like to see more three-way partnerships between government, business and the community.

“I’d like to see these groups get together around specific issues, which could be, for example, urban renewal of suburban shopping centres. If you go and have a look at Downer shops, it really needs some work. How can government, business and the community come together?

“If you look at what’s happened at say, Farrer shops, where the buildings have been refurbished, there are murals on the walls and Fox and Bow is full even in the middle of the week, it’s a real community. It’s time to start asking how can we make that happen in other parts of Canberra.

“That’s just one example. I think we’ve got a number of key areas we need to focus on, and those are transport, innovation, social enterprise, the environment (both built and natural) and Destination Canberra, which is about tourism but also business. The Canberra Business Chamber needs to have very clear and enunciated goals around those five areas.”

Cheryl Creswick - 2 hours ago
Makes it easier for Pollies to head off OS for their holidays.. Hawaii here they come View
News 43

Victor Bilow - 3 hours ago
Elroy Jones Live Virtual Constructive Polygons... View
Elroy Jones - 6 hours ago
What do you think LVC stands for Victor? View
Iain McKimm - 7 hours ago
So to address another issue, those who in good faith who bought a Townhouse in the Opus complex backing onto this development... View
News 23

Richard Shortt - 3 hours ago
Todd Hepworth , many. And, as always, the reply should be “I would be, but you have distracted me by your unlawful conduct,... View
Carole Ford - 18 hours ago
About bloody time, there are morons driving and looking at phones everyday in the hundreds. I hope that fining them helps sto... View
News 3

Joan James - 3 hours ago
This has been such a long drawn out agony for the families. I taught Luke in primary school and worked with his mother Kim. I... View
News 46

Michael Hansby - 6 hours ago
I believe the term is 'shake and bake'. View
Sport 6

Bri Travalos - 7 hours ago
Being at OBGA when Trevor Gerling scored the goal in overtime in the 2018 grand final. Best atmosphere at an away game I’ve... View
John Harriott - 9 hours ago
Being on the edge of my seat in melbourne during overtime and finally seeing cbr lift the goodall cup View
Chris Kubara - 10 hours ago
My Hockey involvement started quite a few years ago firstly as an unpaid chauffeur, then Team Manager, Junior Coach and then... View
News 3

Milo11 - 11 hours ago
Definately not the case the AFP runs ACT Policing which is simply a functional area of the AFP no different any other. There... View
News 3

michael quirk - 11 hours ago
The fundamental issue is the relative costs and benefits of the extension of the light rail to Woden and possible alternative... View
Business 3

The bikie gang threat in the ACT is exaggerated, according to a new report released yesterday by Attorney-General Gordon Ramsay which...
News 31

Chief Minister Andrew Barr has criticised the terms of reference of the Bushfire Royal Commission for not giving a higher...
Property 23

@The_RiotACT @The_RiotACT
Leaving the car at home? The ACT Government is touting a huge increase in public transport usage this year, revealing figures showing more than half a million boardings last week. Check out the new data exciting the government https://t.co/LDqs0wCEBB (57 minutes ago)

@The_RiotACT @The_RiotACT
The Orroral Valley fire, which sparked Canberra's worst bushfire crisis since 2003, is officially listed as out after almost 40 days https://t.co/mN7kkCxdJs (3 hours ago)