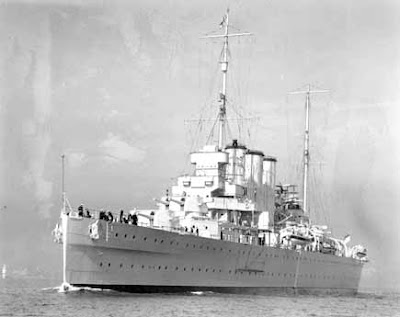 Nearly missed this one.

Yesterday was the anniversary of the sinking of the HMAS Canberra (a Kent class heavy cruiser and at the time only one of two ships of that size in our fleet) in the aftermath of the Battle of Savo Island in 1942. 83 of her crew were lost in the operation with many more wounded.

The only ship in the history of the United States Navy to bear the name of a foreign capital, the USS Canberra was named in her honour.

Today our Canberra makes up a large chunk of the iron in the Solomon Islands’ “Iron Bottom Sound“.

In keeping with determined Navy tradition the next HMAS Canberra is going to be the biggest ship ever operated by the RAN when she enters service in 2012.

Skip the meatsacks and go straight to un-manned if they’re clever.

That’s right – you buy this capability to kick arse! 🙂

Bring back the FAA, I say!

As for assistance, sure they’ll do that too, but it’s not why you buy one, let alone two.

Or, the other side of the coin – use the capability to assist our neighbours during times of disaster?

What government of busybodies can resist the capability to drop an air-supported tank battalion wherever they please?

“In keeping with determined Navy tradition the next HMAS Canberra is going to be the biggest ship ever operated by the RAN when she enters service in 2012.”

Unless Swanie and Ruddie pull the pin on them to balance the budget!

Robyne Mitchell - 26 minutes ago
What about the people who lost their livelihoods and houses as a result of this fire? View
Louise Flood - 34 minutes ago
Robyne Mitchell and the Blue Mountains fire that started with in Lithgow View
Martin Budden - 37 minutes ago
Phill Wall when you realise you've made a mistake the first thing to do is own up to it, then you can fix your procedures to... View
Opinion 32

John Hawkins - 35 minutes ago
Good bike plans are necessary, but not sufficient. What matters is delivery. Delivery is dependent on funding. The bottom lin... View
Steve Manns - 2 hours ago
Adrian Fui Fui Moy cycling is not a sport View
Steve Manns - 2 hours ago
Chris Withington why anyone would choose to ride on that road is beyond me View
Community 2

Kirsty Ross - 45 minutes ago
Fiona and Epilepsy ACT have been a great support to me since my son was diagnosed with Epilepsy. View
Anne Munns - 47 minutes ago
Sally Carter....FYI:-) View
News 35

Martin Bradley - 55 minutes ago
With the exception that programs within the prison focussed on rehabilitation can always be improved and you could call that... View
Food & Wine 30

Andrea Mya Riboust - 2 hours ago
Jamie Angela our large noisy friends from up north, must have just been a particularly busy couple weeks for them 😄 I thin... View
Food & Wine 11

Sukh Raj Singh Cheema - 3 hours ago
Snny Singh how about The one on Main Street, Where we had cup of tea? View
google_user - 4 hours ago
This list is a poor selection of Indonesian restaurants. The list includes 5 star hotel, an Asian shop and a caterer working... View
David Judge - 4 hours ago
You forgot Rasa Sayang in Dickson. Great food- great people. View
News 11

A woman has died after being pulled from the water at a beach on the state’s south coast yesterday. Just...
Food & Wine 11

The owner of Kingston’s upmarket Knightsbridge apartment complex, which had been found to be running an unauthorised hotel on the...
Food & Wine 30

Whenever a story about cycling appears, it activates an avalanche of pent up angst from the wider community. Predominantly it’s...
Food & Wine 30

@The_RiotACT @The_RiotACT
As new photos emerge of the Orroral Valley bushfire, Andrew Barr says the ACT won't engage in a blame game with the ADF https://t.co/TL98OdWXQs (2 hours ago)

@The_RiotACT @The_RiotACT
Fiona Allardyce from @EpilepsyACT explains how the association provides advice & support to people with the condition and their families https://t.co/fJQfbqVSml (3 hours ago)

@The_RiotACT @The_RiotACT
The ACT is expected to continue its 30-year run of uninterrupted economic growth with the territory expected to grow by 2.4 per cent this year https://t.co/OpgxruIxe1 (6 hours ago)