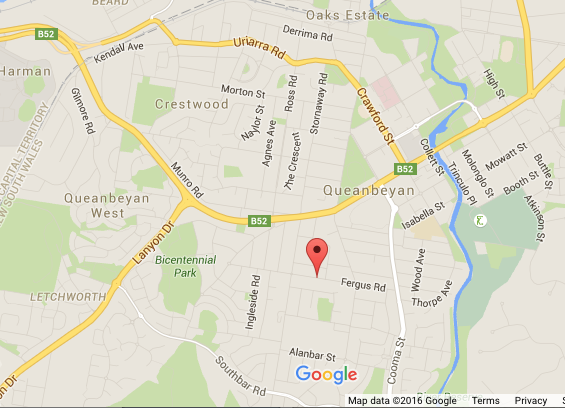 Queanbeyan police have charged a 46-year-old man in relation to an incident where a shot was allegedly fired at a home in Karabar this week.

About 12.55am yesterday, police were called to a home on Fergus Road, Karabar, after a shot was allegedly fired, hitting the front of the home.

Police also executed a search warrant at a home on Anne Street where illicit drugs and other items connected to the offence were allegedly located.

The man was charged with ten offences: four counts of stalking/intimidation, three of common assault, two of cultivate prohibited plant and one of possess prohibited drug.

He was refused bail and will appear before Queanbeyan Local Court today.

Investigations into the matter continue.

Please note Google map indicates location of Fergus Road, Karabar only, not of the house at which shot was allegedly fired.

Jim Jim - 1 minute ago
Balanced journalism Ian, neither political party are doing that fantastic a job and deserve your devotion. Be critical of bot... View
Charny Barney - 19 hours ago
Are there any more policy promises they are going to back flip on? Alistair's indecision and poor decision making is not a go... View
Sue Ellen - 1 day ago
Elroy Jones Yes. It's one of the prettiest areas of the lake. It used to be nicer before they bulldozed all the trees on the... View
News 20

Charny Barney - 19 hours ago
Yes - lets build more trams - first to Woden, then everywhere else in Canberra. It's brilliant. We have roads everywhere, so... View
Charny Barney - 19 hours ago
Magical thinking! Brilliant and perfect description of lib policies 🤡 View
Geoff Roberts - 22 hours ago
They can afford to offer the world because they know they have no chance of forming government. View
show more show less
*Results are based on activity within last 7 days