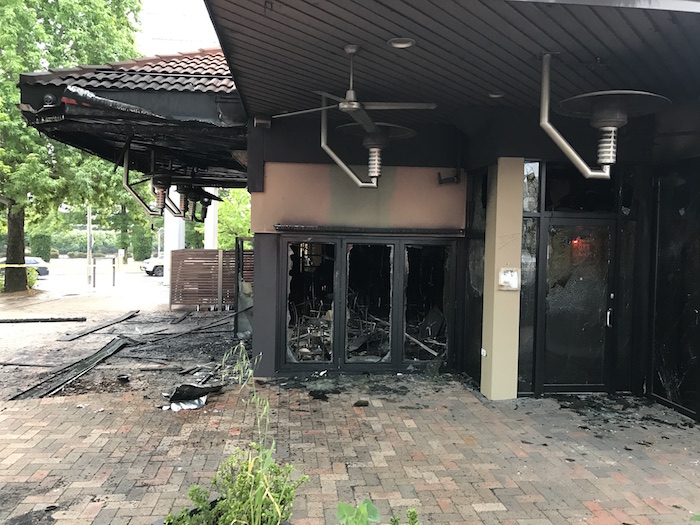 A restaurant site in the cinema building on the corner of Franklin Street and Furneaux Street in Manuka was gutted by fire earlier this morning. 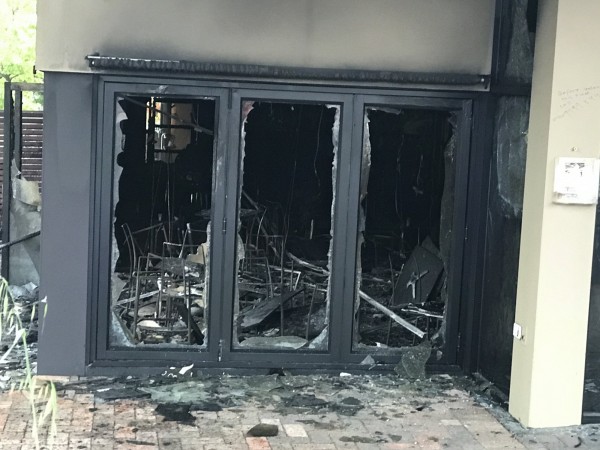 No one was injured in the blaze, which was reported to ACT Fire & Rescue at 3.55am. Cleaners working elsewhere in the building were unharmed. 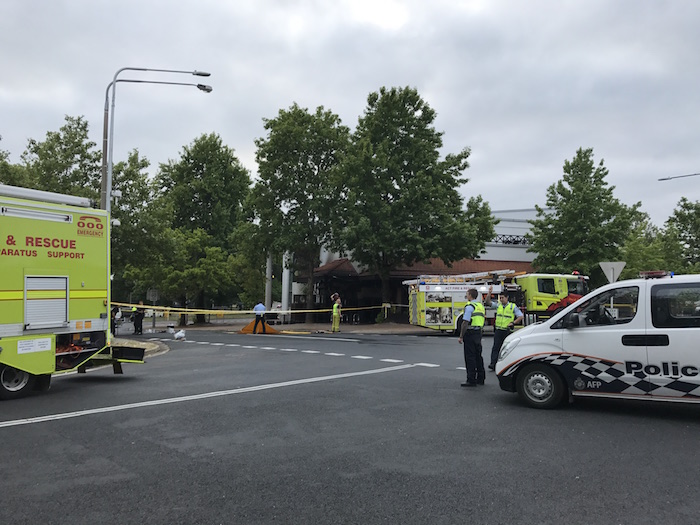 Most recently operated as mediterranean restaurant Avesta, the site was formerly home to Tosolini’s, Pangaea, Charlie Black and Pheast. Part of a building owned by Sotiria Liangis’s Liangis Investments, it had been up for lease after Avesta’s closure earlier this year. 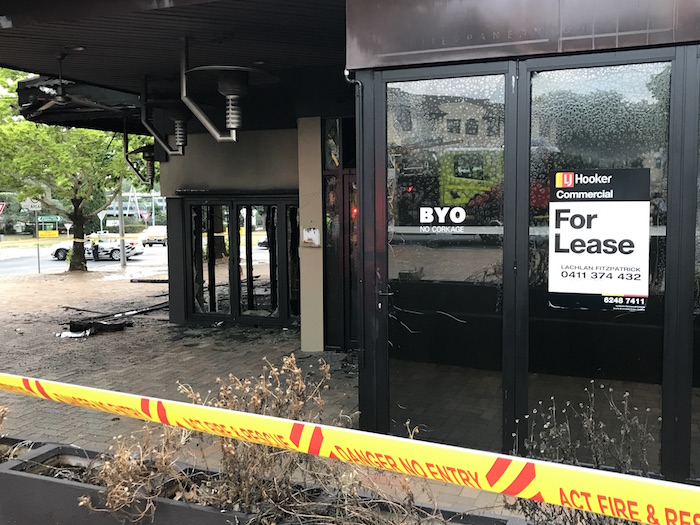 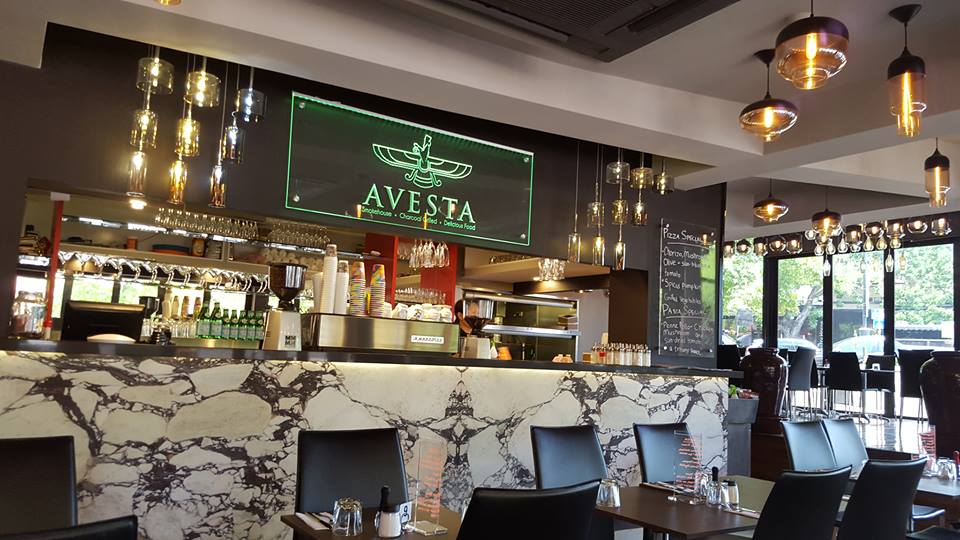 Firefighters were mopping up at around 6.30am this morning after checking for damage to surrounding buildings, and Furneaux Street was closed at the intersection with Canberra Avenue (at St Christopher’s Cathedral). The lane of Franklin Street closest to the fire wreckage was also closed when the RiotACT attended the scene. 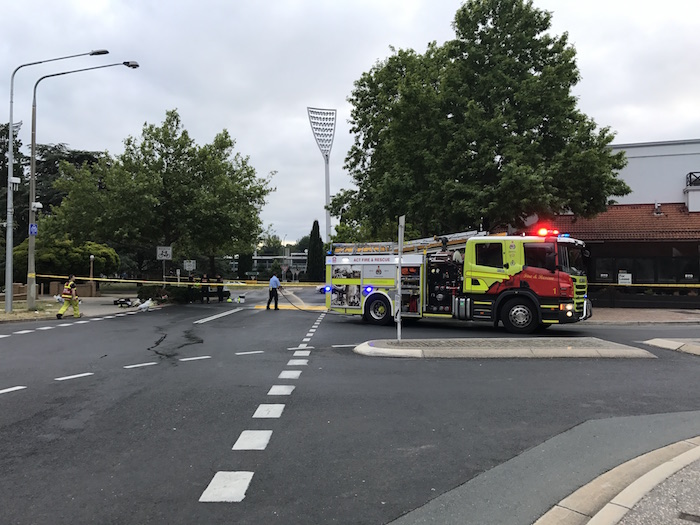 Damage to the restaurant was significant and crews were undertaking ventilation operations this morning. Firefighters were also investigating fire extension and smoke damage in nearby businesses.

The cause of the fire is not known.

For whatever reason, that site has been a revolving door. Hospitality is a tough gig!

Oh, that is really sad. I had been wanting to try eating at Avesta for ages. It is such a great location. Lucky it didn’t spread further.

Dolores Bicket - 6 hours ago
Where can we drop off the blue milk lids? View
Food & Wine 30

Sarah Fox - 9 hours ago
Zalan Filip we will have to check it out! View
Zalan Filip - 19 hours ago
Sarah Fox the one Soph was going on about... reminds me a bit of the huge market thing in Castlemaine. View
Angela Doyle - 20 hours ago
Jacinta Elliott yes please! View
Opinion 108

Jose Black - 18 hours ago
The ACT Greens have a major policy on supporting the community sector (including youth and mental health services) and giving... View
Ghanaian Aussies - 1 day ago
Tom Munro Bullying someone who identifies differently to them is what I am talking about. This is not a fair go for all. So i... View
catder - 1 day ago
Bethany Williams your post exposes you as a hypocrite that knows nothing. We know there are members of the Libs who are conse... View
Property 35

Dwy Jago - 24 hours ago
Now where do you look when your car is stolen? View
News 10

Cheryl Paku - 2 days ago
Congrats Comms@Work! Great to work alongside some of your amazing employees! View
show more show less
*Results are based on activity within last 7 days

@The_RiotACT @The_RiotACT
The Federal Government's First Home Super Saver scheme is a great way for young people to get ahead by saving money through salary sacrificing into their super fund https://t.co/RqV6VDtwBD (24 minutes ago)

@The_RiotACT @The_RiotACT
The bushfire season begins in the Southern Tablelands on Thursday and experts say recent vegetation growth could be a challenge https://t.co/7Gq5UnQzNk (2 hours ago)

@The_RiotACT @The_RiotACT
The ALP's been in charge for almost 20 years but health has remained a constant sore point for successive Labor governments. Why? https://t.co/aGuaozRh3c (4 hours ago)