Corey Ayling, 27, from Belconnen, has pleaded guilty to several charges stemming from an incident at 7-Eleven Fyshwick. Photo: Albert McKnight.

A Belconnen man on parole who stole $12-worth of chocolate bars and attacked a 7-Eleven worker and the bystander who came to help him has pleaded guilty to his charges.

Agreed court documents show Corey Ayling, 27, and his co-defendant drove a purple Ford Falcon with no registration plates to the 7-Eleven store in Fyshwick at about 9:40 pm on 14 May 2021.

They parked at a petrol bowser, but over the loudspeaker the store’s staff member told them they would have to pre-pay for the fuel before he would allow them to use the pump.

The duo began verbally abusing the man, then Ayling walked inside and started taking products from a Mars bar stand.

The staff member left the counter and approached him to tell him to stop stealing the chocolate bars, but Ayling punched him several times, including in the head.

The co-defendant is accused of then punching the staff member a few times in the mouth.

Another man in the shop came to help the staff member and told Ayling to take what he wanted and leave. Ayling also punched him in the face.

He left the store and the staff member locked the front door. But Ayling returned to kick and punch this door until it came off its tracks and was unable to open before he finally drove away.

Soon afterwards, police found the purple Ford Falcon on the Monaro Highway at Fyshwick. Having sustained major damage, it had come to rest facing the oncoming traffic.

About the same time, police found Ayling sitting in water near the Narrabundah Velodrome. The co-defendant was arrested nearby.

The 7-Eleven staff member had to be taken to hospital due to his injuries.

Ayling, from Belconnen, accepted his guilt when he appeared in the ACT Magistrates Court on Thursday (26 August). The court heard the three Mars bars he stole from the 7-Eleven cost a total of $12.

His Legal Aid lawyer, Ms West, said he was currently on parole and it was suitable to order a pre-sentence report for him.

He had pleaded guilty to charges including assault, minor theft and damaging property. Other charges were withdrawn.

Simply looks like an example of a person who missed the comfort and security of the inside of their cell.

Unfortunately, the system allowed him to hurt others instead of simply selecting the “I like living on the inside – I don’t have to worry about anything” option….. 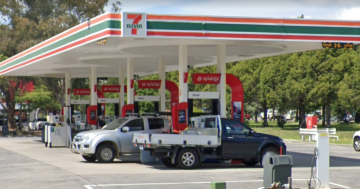 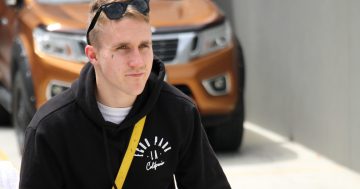