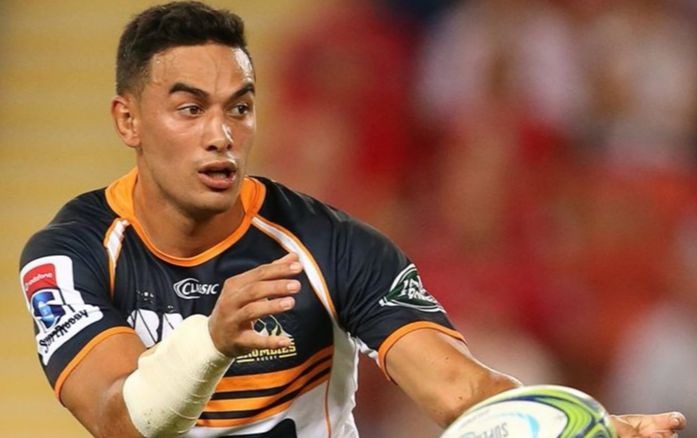 Wharenui Hawera will play at flyhalf against the Sharks on Saturday night. Photo: Supplied by Brumbies Rugby.

The Brumbies’ repeated missed opportunities and two disappointing losses has forced coach Dan McKellar to make drastic changes to the starting XV to face the Durban Sharks on Saturday night.

The first year coach has made six changes for the Brumbies first home match of the season as they welcome the South African franchise to GIO Stadium.

McKellar wasted no time in making changes as the Brumbies sit in fourth place in the Australian conference, 11 points behind the first-placed Melbourne Rebels.

McKellar said he was a “little bit sick” of reviewing missed opportunities as the Brumbies aim to bounce back from consecutive Australian derby defeats for the first time in almost three years.

Kyle Godwin has been dropped, with McKellar opting for a surprising 10-12 combination with Wharenui Hawera selected at flyhalf and Christian Lealiifano moving to inside centre.

“We have been talking about how we want to attack for a long time now, and it gets to a stage where I am a little bit sick of reviewing opportunities. I want them to start being taken,” McKellar said.

“I have picked a team that I think is going to give a performance that we are after and start taking the chances that we are creating.”

In what is a repeat fixture of the Brumbies initial home match of the 2017 season, which they lost in a high scoring affair, Folau Fainga’a will make his Super Rugby starting debut. The young hooker was mightily impressive when coming on as a replacement against the Rebels last weekend.

Wallabies lock Blake Evener will come into the starting side to replace co-captain Sam Carter, who failed to overcome a head knock sustained against the Melbourne Rebels.

The 26-year-old hasn’t featured in a starting XV since playing in the Wallabies second row against Scotland in November.

McKellar said that he really admired Evener’s attitude over the last few weeks.

“To be playing at Murrayfield and Twickenham and then, with all due respect, getting on the bus to Albury for four hours and play a runners game. He was excellent in that game and his attitude has been great and it’s time for him and a huge opportunity for Blake,” McKellar said.

There are also two changes in the back three as Henry Speight is the only player from the match at AAMI Park to retain his spot. Lausii Taliauli is drafted into the left-wing position in place of Chance Peni, while Andrew Muirhead makes his first Super Rugby start from fullback.

Brumbies will face the Durban Sharks at GIO Stadium, on Saturday at 7.45 pm. Buy your tickets from Ticketek.

Don’t forget about the double ticket opportunity with Brumbies and Raiders offering members from each club a free general admission entry to the other club’s game. Non-members can also purchase an adult general admission double pass ticket for only $40, giving you access to both games.

You can also catch the Super W game for an incredible price, where you can gain entry for only $5 when coming to the gate between 4:50 pm – 5:20 pm on Saturday afternoon.

Maya123 - 8 hours ago
Added: I did some research on this. "Trees listed on the ACT Tree Register are protected. They cannot be cut down or altered... View
Maya123 - 9 hours ago
I wonder if being heritage listed gives extra protection to street trees, or not. View
ChrisinTurner - 10 hours ago
Unfortunately street trees are not covered by the Tree Protection Act as demonstrated around Civic recently. View
News 19

Philip Tan - 10 hours ago
Good on the agents! Some people need to wake up and realise Australia is a capitalist society foremost. Whoever brings more $... View
News 6

Gary Wight - 15 hours ago
Big blocks??? Are you serious? Most People in the northern suburbs are living in mainly 400-600 m blocks or apartments. Any s... View
Breaking 2