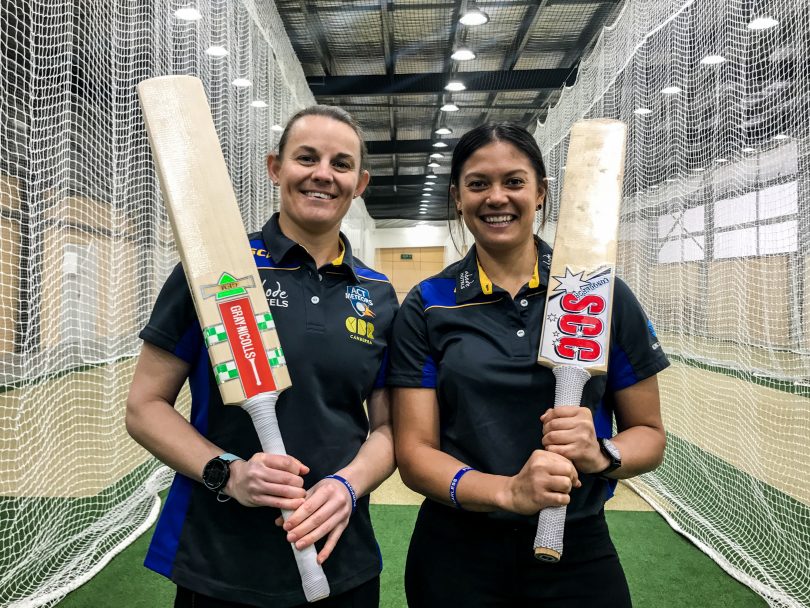 Erin Osborne will return as captain for the 2018-19 WNCL season and all-rounder Angela Reakes will be vice-captain. Photo: Supplied.

The ACT Meteors head coach James Allsopp believes he has found the perfect leadership combination for the ACT side in the 2018-19 WNCL season, naming spinner Erin Osborne and all-rounder Angela Reakes as the leadership duo.

Osborne will return to captain the side she led to finishing fourth on the ladder last season and will be joined by Reakes as her deputy.

The captains and coaching team discussed introducing a leadership team for their upcoming campaign, and Allsopp believes the new-look leadership group will be a big factor in the Meteors success this season.

Allsopp said the leadership duo of Osborne and Reakes is the perfect combination to lead the team as the side prepares for their opening round match on 21 September.

“Erin is very astute when it comes to tactics and cricket related decisions whilst Ange has been the glue that holds the squad together for a number of years now,” Allsopp said.

“Ange and Erin have a great relationship and are both extremely honest with one another in an effort to continually support their growth as leaders.”

Allsopp said he felt Osborne had developed considerably as a leader and it was an easy decision for her to continue as skipper.

“She is an Ashes and World Cup winning player for Australia. These are aspirations that all players in our squad have,” Allsopp said. “I know that Erin is really determined to lead our girls’ in taking that next step to becoming international cricketers.”

“Erin learnt a great deal from her experience as captain of the team during the 2017-18 season and has been extremely reflective as to how she can continue to grow and learn as a leader.”

Michael Quirk - 40 minutes ago
Charny Barney bus rapid transport would operate on its own right of way. Suggest you look at the Brisbane metro to be operati... View
Ric Hingee - 2 hours ago
Charny Barney You really are a clown and I suspect a pretty bad one at that. View
Ric Hingee - 2 hours ago
Justin Watson We are talking about rubber wheeled trains running on an imbedded fixed course, not on a normal road. View
ACT Election 55

Ric Hingee - 1 hour ago
Ella - I am surprised you have any money to donate to Labor after paying all the excessive taxes, charges and rates that the... View
Ric Hingee - 1 hour ago
Bethany Williams The minority parties and independents needed to find common ground and run as a team. Otherwise they are pro... View
ACT Election 23

Evan Hawke - 3 hours ago
Darron Marks I totally agree that the roads in Gungahlin use to be shocking and roads like horse park drive needed upgrading.... View
Darron Marks - 14 hours ago
The increased spending to duplicate some of our arterial roads has made a difference you are correct. But to say there wasn't... View
Evan Hawke - 1 day ago
Glory Hammer I totally agree that every area needs politicians who fight for there areas. Most of the politicians in my area... View
Property 10

thebscaller - 8 hours ago
Joke of a leader and party. They are making some bold statements and promises that don’t add up. There is no way these prom... View
Acton - 10 hours ago
A conservative is someone who is averse to change. The Labor Party has now held government in Canberra for 19 years, proving... View
JS9 - 11 hours ago
"The problem would appear to be how to pay for them and it’s not easy to pin down Mr Coe on where the money will come from... View
ACT Election 12

Caz Ireland - 11 hours ago
Anyone remember when Labor shut down all those schools about 15 years ago? They’ve had 20 years in government so their reco... View
Keith Cheetham - 1 day ago
Pork barreling at its best as Labor does. And then dont initialise it. View
Bronwyn Wilson - 1 day ago
Where are e teacher librarians going to come from? There are very, very few in the ACT - that’s why so many schools don’t... View
Lifestyle 9

@The_RiotACT @The_RiotACT
RiotACT readers showed overwhelming support for a more compassionate policy around border closures, but we suspect there'll be less love for election corflutes. Tell us what you think in this week's poll https://t.co/rY3E9tqOnK (37 minutes ago)

@The_RiotACT @The_RiotACT
School holidays are back, and from racing model cars to racing around the Tough Nutterz Inflatable Course, there’s plenty on in Canberra this week https://t.co/LFEwDETxzW (1 hour ago)

@The_RiotACT @The_RiotACT
Around 230,000 people - more than 50% of the current ACT population - would have to move to the Territory this financial year if the Canberra Liberals were to pay for their election promises using their 'grow the pie' model, according to ALP analysis https://t.co/KfWNlGSzz8 (3 hours ago)