Michael Harris’s winning photo of the iconic Sugar Pine Walk, near Laurel Hill in the Bago State Forest, before it was destroyed by bushfire. Photo: Michael Harris.

Photographer Michael Harris knew exactly how he wanted his photo of Sugar Pine Walk, and now it has netted him $500.

Michael, from South Nowra, has been announced as the winner of the Sugar Pine Walk commemorative photo competition with his image titled Winterlong.

The commemorative competition – a Forestry Corporation of NSW initiative – was announced earlier this year after the 2019-2020 summer bushfires annihilated the popular Bago State Forest tourist attraction. Entrants were asked to submit photos of the iconic walk prior to its destruction.

Michael and 59 other finalists were selected from 380 entries.

The competition is something Michael “kind of forgot about” but on Friday night (14 August) he received an email informing him he had won.

The memory of how the photo was taken will forever be etched in his mind. 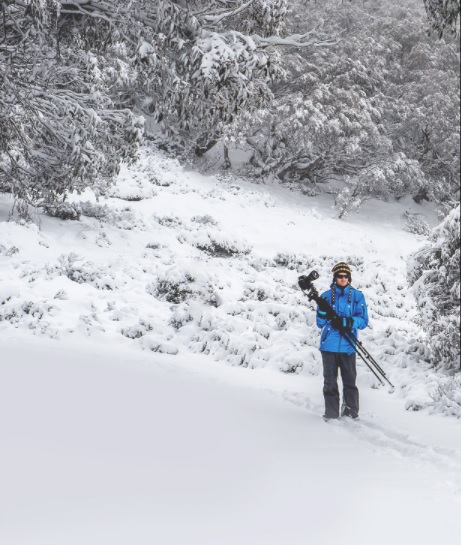 The first time Michael saw Sugar Pine Walk – which was located a short distance from Laurel Hill between Batlow and Tumbarumba – was in October 2013.

A self-taught photographer with a love of landscapes, he said he knew he would eventually make it back to the forest for a shot he had in mind.

A year later he returned. But not before he’d studied the weather patterns and sun placement for days, weeks and months on end. On one early August day in 2014, he clocked off work, jumped in his car, drove five hours from Nowra to Sugar Pine Walk, pitched a tent in the snow and slept.

“A lot of things needed to line up,” he says. “I needed about two or three days of good snowfall, it to be clear overnight, and a sunny day the next day.”

That was the easy part. The hard part came as Michael fronted the bitterly cold predawn darkness to set up his tripod to just sit and wait for the sun, which inched its way upwards and finally through the trees.

“You don’t have very long before it breaks the horizon and comes through the trees – it’s only a window of 10 or 15 minutes,” he says. “So lots of planning, time and driving waiting for that 10-minute window.”

This is not the first time Winterlong has caught a judge’s eye. In 2015, the photo won a gold award in the open (nature) category of the EPSON International Pano Awards.

Michael is stoked with this recent win simply because it captures a piece of Australian landscape that is lost forever.

“We don’t have forest like that anywhere else in Australia,” he says. “I’ve travelled overseas to a lot of places; I’ve seen the redwoods in the US, but nothing like this here. It was really unique and beautiful.

“Unfortunately, I’ll never be able to get back to see anything like that again so having a photo like that is just a really nice reminder of how special it was.”

Forestry Corporation of NSW’s Snowy regional manager, Dean Anderson, congratulated and thanked Michael and the other finalists for sharing their memories of Sugar Pine Walk.

“Sadly, this iconic location was burnt in the 2019-2020 bushfires and is now removed, but the photo competition has captured the beauty of the site and marks its passing,” he said.

“The stories that came with the photos were touching and it is apparent the Sugar Pine Walk was a special place for many people.”

Annamaria I think I’ve seen u mention the walk?

Jacqleequack Hassall Golding yes managed only 3 visits, at least one was in the snow.

Croissant Henderson - 2 minutes ago
Love means nothing to tennis people. View
Jennifer Manson - 2 hours ago
Many people do not find it entertaining at all, but rather boring, so it's good to see some fun. View
Kate Olivieri - 3 hours ago
1. Damn, so many haters 2. You forgot Liam Broady complaining too 3. Aus Open should be so happy these guys are drawing crowd... View
Food & Wine 38