Six years of local campaigning has paid off for Fiona Phillips with one of Australia’s most marginal seats turning red with a 2.5 per cent swing to Labor at Saturday’s rollercoaster federal election.

“We had a sitting member that was retiring and candidates for the Coalition that had been brought in for the election, and I think people saw through that,” Ms Phillips says.

While counting continues, at the time of writing, Labor has won the seat with 52.7 per cent of the two-party preferred vote, the Liberals’ Warren Mundine 5.4 per cent behind on 47.3 per cent.

Gilmore has been won by the Coalition at 11 of the previous 12 elections. Until now, Peter Knott in 1993 was the only Labor Member for Gilmore. In 2019 the seat is Labor’s only pick-up.

“We talked a lot about health during the campaign, that’s one of the major issues in the area,” Ms Phillips says.

“Labor had committed to a full Headspace in Batemans Bay, as did the Coalition, so I am looking forward to seeing that happen.

“And funding for the Eurobodalla Hospital, we committed funds for mental health beds and the Coalition didn’t so I am going to be pursuing that relentlessly.”

Being new to parliament, Ms Phillips says she is looking forward to the support and advice of more experienced hands in neighbouring electorates – Labor’s Mike Kelly in Eden Monaro, Stephen Jones in Whitlam, and Sharon Bird in Cunningham.

In terms of who should lead the Labor Party following Bill Shorten’s step back, Ms Phillips says, “the thing with the Labor Party is that there is a lot of great talent there.”

“We haven’t seen all of the names come forward yet, but I really like Albo, he’s been a great support to me.”

While disappointed in the national result, Ms Phillips remains upbeat about the three years ahead in opposition, as does Mike Kelly in Eden Monaro who has claimed the seat for the fourth time in a tight contest with the Liberals’ Fiona Kotvojs.

“We are in a tight marginal seat – it doesn’t matter whether the local member is in government or not,” Dr Kelly says.

“I think it depends on the effectiveness and the ability of the local member to work with both sides of politics.

Both Mike Kelly and Fiona Phillips point to the impact of the “black operations campaign” on franking credits and death taxes as having a big impact nationally, supported by Clive Palmer’s vast and long-running $60 million advertising blitz.

“We shouldn’t exaggerate what happened in this election. This was no ringing endorsement of any agenda from the Morrison Government,” Dr Kelly says.

“There is an issue [franking credits] there and someone is going to have to get a lid on it.” 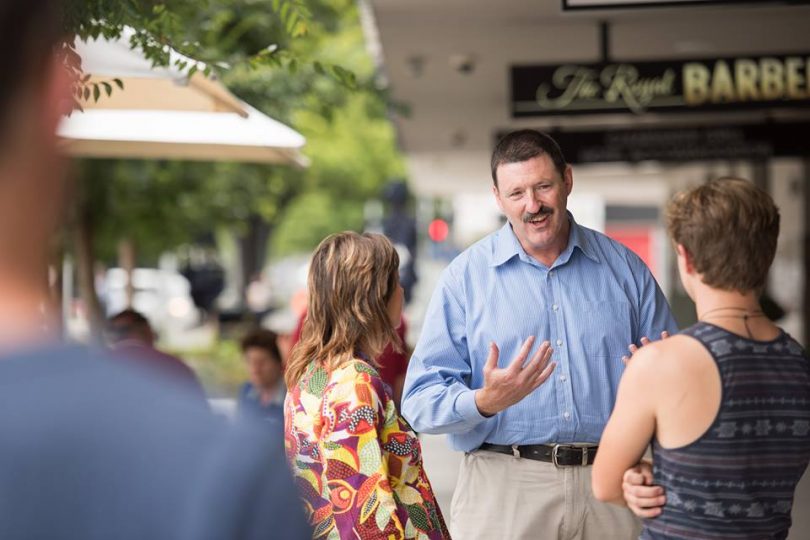 Dr Kelly says he hopes the defeat of Labor’s big agenda doesn’t restrict the political conversation in the future.

“It’s really hard to cut through to people, especially from opposition,” he says.

“But I don’t want us to walk away from our climate change policy.

“We are not going to wait around for another three years for action on climate change, we will maintain our activism and convince this government to come to the table.

When it comes to who should lead the party, Dr Kelly says he’s interested in hearing the pitches of people like Anthony Albanese and Chris Bowen.

“We still aren’t certain of who is running, I do think the role of the leader has increased over time, given the presidential style of our election campaigns now.

“But Bill Shorten would have made a great Prime Minister and it’s a shame we won’t get to see that.

“Going forward we do need a leader who can engage with everyday Australians and is seen to be understanding and taking on board grassroots issues. We just didn’t communicate that effectively.”

Cleve Gabriel - 2 hours ago
Can’t see it happening ,he’s there for as long as he wants unfortunately. The shame of it all is that represents himself... View
Penelope Farnsworth - 4 hours ago
It tends to be hard to shift the one Labor one Liberal Senate pattern for the ACT View
Gary Hatcliffe - 4 hours ago
MAY BE? HE'S A NOB.😃 View
News 136

James Ballard - 6 hours ago
Ouch! Once the ATO come knocking, quite often it's with a court order to appoint a liquidator. View
Community 13

Judy Geary - 6 hours ago
There are some beautiful old houses and landscapes visible from the train when travelling between Mossvale and Canberra. View
show more show less
*Results are based on activity within last 7 days