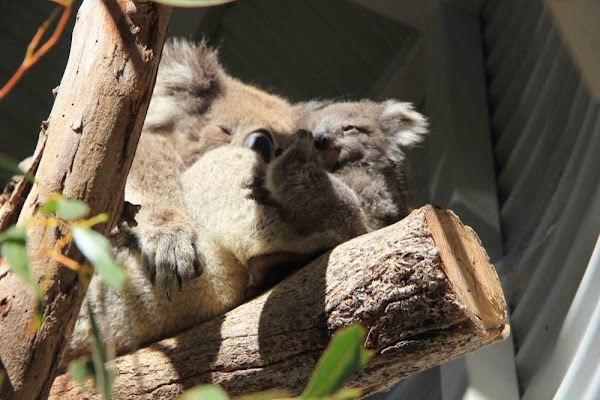 Mayor Rattenbury has the happy news that Tidbinbilla is taking delivery of eight more koalas:

Tidbinbilla Nature Reserve’s captive koala population has been boosted with the arrival of eight koalas from the Otway Ranges in Victoria, Minister for Territory and Municipal Services, Shane Rattenbury, announced today.

“I am pleased to welcome four female koalas and their four back young (one male and three females) to Tidbinbilla Nature Reserve,” Mr Rattenbury said.

Mr Rattenbury said the koalas were put into quarantine on arrival so health and veterinary assessments could be conducted. The koalas will be in quarantine for approximately another three weeks during which time they will not be on public display. After this time, the public will be able to encounter the koalas in their natural environment.

“The new arrivals have brought Tidbinbilla’s captive koala population to ten, the largest group of these unique marsupials at Tidbinbilla since the area was devastated by the 2003 bushfires,” Mr Rattenbury said.

“The intake will ensure koalas continue to be part of the threatened species captive wildlife program at Tidbinbilla. This is vital to the ongoing conservation management of koalas which, in the ACT, are classified as a threatened species.

One Response to MOAR KOALAS!!!
Filter
Showing only Website comments

The Koala closest cousin is rotting over the fence.

Finally Relented - 30 minutes ago
Ashley Wright yeah. Know that. Lived here all my life pretty much. They don't work any more. Much better 10-20 years ago. Pla... View
Ol L - 18 hours ago
Maybe if we do nothing another government will be in power when it all blows up, so let’s do nothing in the meantime View
Ashley Wright - 18 hours ago
Sally Greenaway found the article. https://www.cityservices.act.gov.au/roads-and-paths/traffic/trafficsignals/drakeford_drive... View
News 51

Ian - 11 hours ago
This opens an interesting idea for industrial action. Everyone turn up at the same time on the same time, and overfill the av... View
Adam Jovanovic - 11 hours ago
Depends on the person. If works pretty much your only social life then yes it will be hard and your going to have to make an... View
Helen Prior - 13 hours ago
Not only has the human factor gone from work place, it is disappearing from from all over Canberra. View
News 23