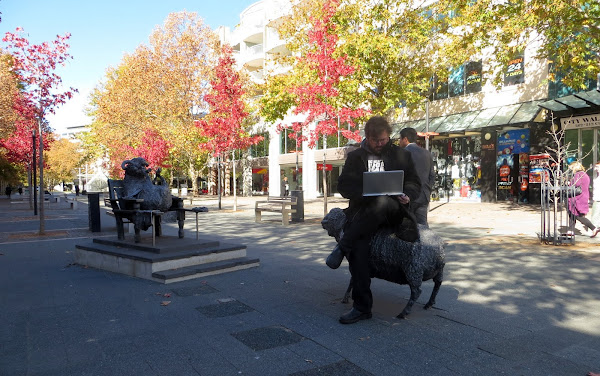 The thing about being a fully functioning high-tech mobile office from the dark far flung future of twenty thirteen, is that your list of possible office locations is limited only by your imagination.

Also some laws… and physics.

Also we want to be able to get there on bike.

What I’m trying to say is you don’t have to work in a cafe if you don’t want to. In fact, you can work in the great outdoors!

Today Johnboy and I decided that because we are men of the city, we should work in the city. We met at City Walk, picked a park bench that wasn’t too wet or sticky, and got to work.

We quickly discovered that the sun was in our eyes, so we cleverly went and picked a different bench. One that was in the shade. That was pretty good for a while until the sun moved and the glare meant we could no longer see our laptop screens. Again we moved, and again we missed the previous warm spots we’d made on the last bench.

This new spot was pretty good for a while, but then the sun caught up with us again. We shuffled about a little. At some point, Johnboy ended up on sheepback. That giant ball of fire in the sky continued to be more trouble than it was worth, so we retreated to the nice grassy area on Ainslie Avenue with lots of tree shade. This final spot was juuussst right.

Nothing! No power, no WiFi! But of course that was to be expected. The mobile coverage was fine and we didn’t have any problems getting work done using mobile internet. However as I mentioned above, the glare on our screens was a big issue. This caused me to have to turn the brightness up on my monitor, which drains the battery faster.

Worth noting if you plan to work outside for an extended period of time.

You could try catching and killing one of the many magpies in the city, but there are a lot of them and they do act vaguely like a gang so I wouldn’t recommend it.

Of course being in Civic there are a million places to go for food, but I’m not reviewing those places.

Not ideal. I’m a very distract-able person who loves people watching. I was having a great time, but I did find it hard to stop watching the line for Subway and focus on what I was supposed to be doing. Johnboy seemed fine.

Once we moved to the quiet spot on Ainslie Avenue the foot traffic slowed down and I was much more productive. At this point though Johnboy swapped roles with me and started car watching. I think he was trying to keep track of how many diplomats were driving past.

We still got our work done, but it wasn’t ideal. Distractions galore.

I don’t have to throw to Johnboy this time!

No coffee, it’s not a cafe. You go buy it somewhere else and bring it with you. As a bonus you get to pick where you buy it from!

Again not great, the metal benches on Civic walk are not very nice. You are of course exposed to the elements. Today wasn’t an issue as it was quite a nice day, but we do live in Canberra so…

Things got better when we moved. The Ainslie Avenue benches were much nicer to sit on. Also the beautiful trees and obscure memorials were a lovely backdrop to work around.

I got hit up by a chugger at one point, but considering I spent the whole morning outside in Civic I think only getting hit up once is a pretty good effort.

Everyone. It’s Civic, everyone is there. A million office workers, a bunch of homeless, some families with screaming children, the chuggers, one particularly amusing gang of truant private school kids, and of course the early morning junkies.

All of them there, all the time, living out their lives.

I loved it, but like I said, it’s very distracting.

I had a really fun morning. I love the city, and being outside on a nice bright day like today is a pleasure. However I feel we got our work done in spite of the place, and that’s not a good thing in a mobile office location.

If we had started by going to the chairs on Ainslie Avenue I think I would be much more likely to recommend Civic as a place to get some work done, maybe I’ll try again at some point.

We’ve been storing up your suggestions and adding a few of our own to our shortlist, but that’s no reason to stop giving us ideas in the comments Rioters.

and any number of Brokeback/Waiting for Godot references, with a Kiwi flavour.

Next time, a cushion and a thermos might offer some relief.

I suppose the Belconnen Owl would be a bit of stretch?

Now that you’ve experienced the outdoor/camping style i’m sure you won’t be in any rush to revisit that scenario.Besides it’s much more civilised sipping lattes and downing a red eye in comfort and offering an opinion on the establishment of choice.

Many years of study at the Monaro-Merino School of Charm taught each pupil how to balance a computer on one’s knee while sitting on a sheep, without compromising one’s dignity.

And then someone lets the whole school down with the glare, and the boots and the beard.

Peter Hyde - 7 hours ago
Margaret Dudley because eventually there will be light rail from Woden/Tuggeranong, Belconnen and Gungahlin to the city rathe... View
Yuri Shukost - 14 hours ago
Barr will find any reason not to build a new stadium or renovate the existing one. I suspect he’d find the money if it affe... View
Fred Pilcher - 15 hours ago
Good news. Sanity prevails. View
News 64

Suz 'olmes - 9 hours ago
How about something nice? Invest some money to clean up the tavern and make it more family friendly or a space for cafes. No... View
Jenny Keeley - 12 hours ago
I already have 3 McDonald less than 10 minutes from my house. Put something else there, anything else! View
Chris Goodrum - 18 hours ago
Many Happy New Years Eve’s spent there, met my partner there many many years ago! It should be heritage listed not knocked... View
News 19

Julie Macklin - 11 hours ago
And that is the most constructive comment you could come up with 😂 View
Warwick Alsop - 13 hours ago
Gotta love those NIMBYs View
Marea Fatseas - 15 hours ago
Who said the proposed facilities in Fyshwick are “going green”? How is CRS recycling just 5 percent for local use, export... View
Breaking 1

Valleyboy - 11 hours ago
NSW has every right to protect itself from potential threats from any prospective entrants, including ACTians. The ACT also h... View
Property 54

Chris Endrey - 18 hours ago
Who is most immune to hardship, who is pampered most, living the life that even the Gods would envy? The answer, clearly, is... View
Spiral - 19 hours ago
"But that is, of course, not true – our society chooses to devalue the arts because the focus of all of our energies is mon... View
Acton - 21 hours ago
Many, if not most in the arts community have long shown utter contempt for us in the broader community and made a living out... View
News 15

Jim OR - 21 hours ago
Imagine a border lockdown between the two... View
News 53