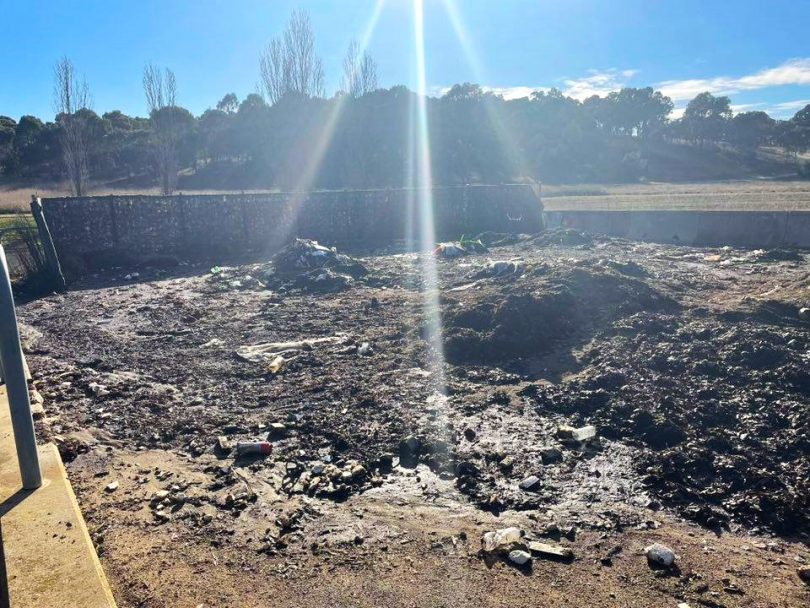 Since residents first started living in Moncrieff just under a decade ago, they’ve have put up with litter blowing around their streets and the smell of rotting rubbish. Now, they’ve had enough.

The Moncrieff Landcare Group and ACT Greens candidate for Fenner Natasa Sojic are calling on the ACT Government to remove the problem – a ‘sludge pit’ or ‘drying pad’ adjacent to the Mirrabei Drive and Wanganeen Avenue roundabout.

The ACT is laced with a network of stormwater channels that take rain from suburban streets and feed it into our lakes and rivers. Grates are stationed along these channels to catch leaf litter, rubbish and the odd shopping trolley and prevent them from causing pollution problems further down the system. 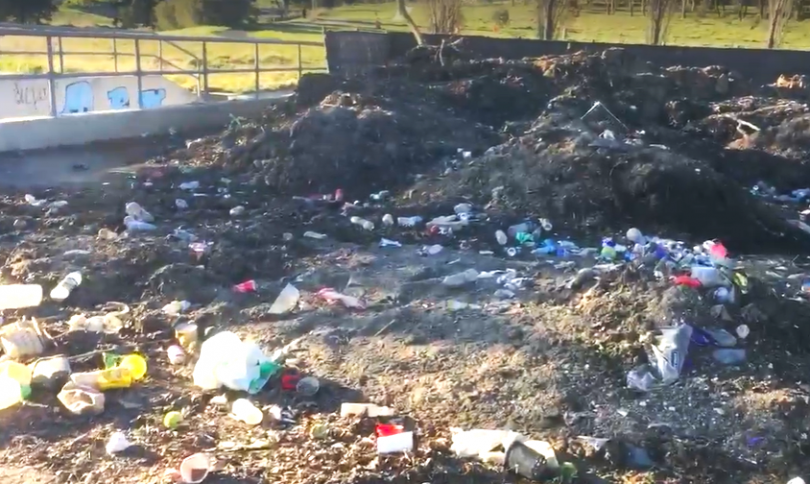 Residents say that once dry, the wind picks up the rubbish and odour and blows it throughout Moncrieff. Photo: ACT Greens.

These grates clog over time and the resultant ‘sludge’ has to be cleared.

However, landfill sites won’t take wet waste, so the sludge is moved to a separate pit until it has dried off enough to be transferred.

Moncrieff has been home to one such pit ever since it was just an empty paddock more than two decades ago. As the northern suburb has grown, residences have drawn closer and closer to the pit, and the problem is now literally under their nose.

After picking up rubbish alongside volunteers from the Moncrieff Landcare Group, Ms Sojic realised it was all coming from one place.

“The sludge emits a terrible odour, and the rubbish is not contained, and often blows over the reserve, roads and surrounding residential area,” she said.

To make matters worse, she says the rubbish attracts vermin and predators such as snakes.

“This is a recreational area. People take their dogs for walks, go cycling, go on family walks, and the pit is a real hazard for them.”

Ms Sojic says she has also heard local residents describe the entrance to the pit as a major traffic hazard.

“There are several reports of near misses with the trucks accessing the pit on the Moncrieff Residents Facebook page.”

Since the petition was posted on 15 January 2022, it has received more than 400 signatures.

Ms Sojic says the ACT Government does seem to have responded in recent days by emptying the pit and mowing around its edges.

“Now we need the ACT government to commit to permanent action and find a new site away from people’s homes.”

The petition calls for the pit to be properly enclosed to contain rubbish and odour. But this is only an immediate and temporary solution.

Ultimately, petitioners want the pit removed and placed away from residential areas and closer to existing landfill sites.

Once in landfill, odour is managed by covering the waste with soil to a depth of 30 centimetres and treating the leachate and landfill gases with a commercial-spec deodoriser that is diluted and sprayed from the back of a water cart.

“Moncrieffians are very passionate about this issue,” Ms Sojic says.

“They have tried to remove the pit for a long time.”

The petition to remove the Moncrieff drying pad closes on 9 February.

Lol it was there before they moved in. Don’t buy a house next to an airport and whinge about the planes
People are soft

Will they humanely remove the families of ducks who live around it before they act? I do worry about the scum ducks if the pit is removed.

The storm water systems around the ACT, do not work apart from transporting carp around and all need to be revamped. They are dumping grounds for all sorts of waste. The one in Moncrief full of sludge is not necessary. Furthermore the amount of (filtered) rubbish going into Tuggeranong Lake is disgusting too. Lake Burley Griffen has to be the filthiest waterway of all. The blue green algae can be prevented by spraying it regularly with an organic product that will neutralise phosphate and thus reduce and eliminate blue green algae. Yet the ACT govt do nothing apart from employing people to pull rubbish out of the lakes systems. And don’t even get me started on the filthy water around the Kingston docklands area.

So.. This story is.. “residents who bought houses near sludge drying area are complaining about the smell”..

Maybe if residents didn’t blow lawn and leaf clippings into gutters and lazy people stopped littering we wouldn’t need our storm water drains cleaned out so often with the need for these drying pads.
Typically the age old “Not in my backyard” argument.

Steve Jones True. I have had neighbours who literally just pushed all their leaves into the street, where they sat for weeks on end, while they also complained about neighbours whose “untidy” yards had leaves in the ground. In autumn.

Aaron Will the pit has been there that long, Moncreif of course has not been. This is more in Amaroo.

Aaron Will if that’s the pit near mirrebai then it’s been there since forever. The article makes the reader assume Moncrieff residents have been putting up with it for 25 years. Now Moncrieff may have been gazetted as a suburb for 25 years but I’d put it at 5, maybe 8 years max since building began in the suburb. The infrastructure is very clear to see from most of the southern part of Moncrieff that borders Ngunnawal.

I suggest you read up on “social disamenity” from waste odour and commence a class action against the ACT government because now that it is public knowledge no one will want to buy a property in your suburb.

Seeing as the pit (which is part of a stormwater pollutant trap) predates the first houses in the suburb by about 20 years I would say good luck with that.

Besides it’s not like it is hidden, and it serves a function that is essential. It sits between the stormwater drains that come from Casey and Taylor and the Yerrabi ponds and it’s primary function is a gross pollution trap to prevent all that crap ending up in the ponds, which in turn feed Ginninderra Creek and the Murrumbidgee river.

I know you dislike anything environmental but I am sure even you can see that pollutant traps are essential and are not virtue signalling.

Don’t know why they are complaining when they got their property at a discount due to its proximity to the sludge pit. This is how first homeowners need to compromise if they want to get their foot on the property market and if this makes houses more affordable for families then perhaps that would stop their constant whining.