Let’s shame some drivers shall we?

If you see a parking attempt you think is worth a shaming at please send it to us at images@the-riotact.com.

Remember to include the word parking in the subject and let us know what name you would like to be credited with.

1. Ryan starts us off in fine form this week with a couple of cars with identity issues…

…and follows up with a photo that may not be from Canberra, but is a nice reminder that we’re not the only ones who try and squeeze in where we shouldn’t.

Guy failing at parking in Dickson around 8.30am.

Too bad a couple cars didn’t park him in.

This car owner’s sense proportion might be a bit out…

4. Patsy has been doing her research:

The young woman who owns this one parks here, next to the Albert Hall regularly. She parks on this corner and catches a bus into Civic from in front of the hall, about 50 metres away. She parks on this corner despite the availability of legal and safe car parks a mere 50 metres or less away. She’s a little bit porky. This is what my brother calls ‘fat person parking’.

5. Bubzie sent us this little collection, the last one in particular is quite impressive: 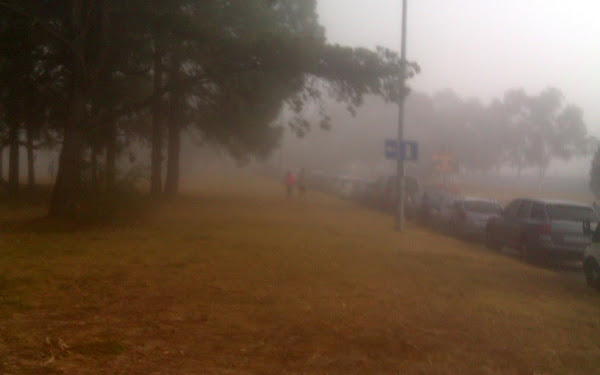 Woden last night. Apparently no one could see the line…

6. An anonymous Rioter saw this scene play out:

This lovely lady mounted the curb, drove along the sidewalk for a few metres then parked about five inches behind the other car. She even got out, inspected her park, and thought it was fine enough to leave it where it was!

7. Johnboy caught sight of this while he was enjoying some theatre:

8. Andrew has been keeping an eye on Belconnen:

The red truck is on the footpath outside the Church’s Center in Belconnen.

White sedan is located at the DIMIA car park in Belconnen.

White S40 is not actually parking out side the lines as such, but the guy, a fellow Public Servant, has decided to abuse the slackness of the ACT government parking inspectors and is using the 5 minute parking zone all day. Let’s hope it does not catch on.

9. P1 is worried that parking may be dead:

Don’t know if parking will ever be a thing again, but this spot in Woden frequently has a car in it. This guy probably won’t park there again though.

10. Paul picked this up at the million paws walk:

Least some of them have pretty yellow envelopes on their windscreens.

There were some interesting parking efforts at the Paws Walk. Wish I took pictures.

#9: an interesting parking related anecdote – when this was taken two surveyors were measuring up the lot for another building development. Parking in this town will never get easier again, guaranteeing Barcham something to post Monday mornings for eternity (or until it stops drawing the punters, which is what my comment was about).

#8 parkingo n verge – that car won’t go very long without sporting a yellow envelope. It’s no justification but I can understand why motorists are tempted to park like that in the immigration car park. The ACT Gvt keeps closing car parks round Belco for high rise developments without offering alternatives other than catch the bus or ride your bike.

By 9am, that car park is full and there are limited options. People used to park up the back of ComSuper but even that car park has been half subsumed by a high rise development.

Plenty of all day paid parking behind the labour club if you care to walk a bit. Hundred plus of spaces.

Well this is embarrassing.
No, its not instagrammed…but its the wrong photo!

Next time, I will proof read emails! Doh!

Hahaha! I was looking at it trying to work out what was wrong. But it was first thing in the morning and I figured I was just too sleepy to work it out so I better just hurry up and get it up.

Next time I’ll email and ask!

Too late she cried … what else would I expect from a poet? Well played!

Well this is embarrassing.
No, its not instagrammed…but its the wrong photo!

Next time, I will proof read emails! Doh!

#8 parkingo n verge – that car won’t go very long without sporting a yellow envelope. It’s no justification but I can understand why motorists are tempted to park like that in the immigration car park. The ACT Gvt keeps closing car parks round Belco for high rise developments without offering alternatives other than catch the bus or ride your bike.

By 9am, that car park is full and there are limited options. People used to park up the back of ComSuper but even that car park has been half subsumed by a high rise development.

To me it looks identical to one that was posted a while ago, and lead to some ‘heated’ discussion about trucks being allowed to park almost anywhere.

Belconnen Parking spoto is regularly played twice a day on my floor. (Sadly not by my section).

Apparently there are a few cars that regularly park badly in the old ABS/ComSuper carpark.

Is the first one in #5 an Instagram photo? And can anyone actually see enough to identify what the parking issue is?

Ken McInnes - 1 hour ago
Great people great coffee always a smile just a happy place. Well done it’s always nice to see a family working together da... View
Neridah McMinn - 3 hours ago
My absolute favourite place for a Saturday morning breaky 💕 View
Graeme Jeffries - 4 hours ago
I always stop there for a great coffee and toasted cheese and tomato sandwich. A friendly place and service with a smile! May... View
Opinion 2

assiduous - 4 hours ago
The predictable consequences of ACT government policy of not supplying the market with land on which to build housing in an e... View
Patrick Rezek - 6 hours ago
Maybe they can sleep on that little Lake extension that’s being built now at Acton. There is $$$ for that. Remember folks.... View
Savita Ubhe - 8 hours ago
Joel Suryawanshi wow domestic violence seem to be a huge issue there. Sad! View
What's On 17

Over 200 parking tickets issued at GIO Stadium during Raiders match

The best car parks in belconnen

“Punished for our success”: the parking crisis at Garran Shops