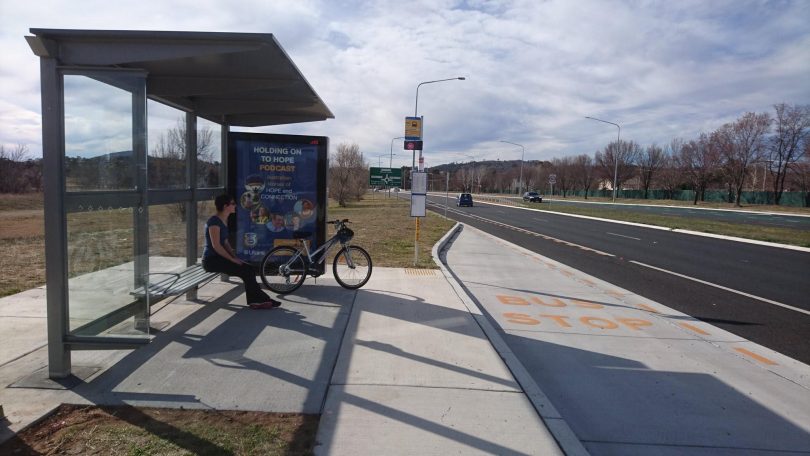 The Ashley Drive duplication has been given six new bus stops to improve access to Rapid and local bus routes in Wanniassa as the ACT Government rolls out upgrades to more than 50 bus stops across Canberra’s public transport network.

New bus shelters have also been installed at Alinga Street in the City, Eyre Street and Giles Street in Kingston to compliment the recent road upgrade, Gundaroo Drive as part of the duplication project and Well Station Drive to improve connections to the light rail stops.

“These works have taken place all over the ACT to improve comfort and access for everyone using our public transport network,” Mr Steel said. “New signage has also gone up at bus stops across Canberra to help people more easily identify Rapid route services.”

New wayfinding signs have also been installed around the City and Woden Interchanges to make getting around the new integrated network easier.

Around 40 bus stops also received upgrades to make them more accessible for the disabled and the elderly, in line with the Commonwealth Government’s Disability Standards for Accessible Public Transport Act 2002.

A Transport Canberra spokesperson said the works varied depending on what was required at the site, but typical upgrades included improved footpath access, tactile ground surfacing for vision-impaired bus users and flat concrete waiting areas.

The spokesperson could not reveal the total cost of the upgrades, stating that the upgrades have been conducted over several projects, each with their own funding, and costs varied depending on the level of upgrade.

The article starts with “the Ashley drive duplication …”

Ashley drive was never actually, completely duplicated. They ran out of money and couldn’t even get that right !😂

People are spending more time waiting in them i guess 😕

I spent 7 hours on a bus to Sydney and back last weekend. I think I’m done with buses for the next year at least.

Wonder if an ACT Minister has ever sat in a bus shelter waiting for a bus in really bad weather, if they had they might rethink the design for Canberra weather!

The good news that they proudly publicise – 50 bus stops to get upgrades!!!!. The bad news that they bury deep within Government documents – Canberra Transport removed 731 stops across Canberra for the new Bus network.

one of the ‘upgrades’ in weetangera was a slab of concrete and what looks like a recycled, unpainted steel frame shelter with no glass walls at all!

10 years to upgrade the road, 10 minutes to take away the buses.

By 6 stops are they counting both sides of the road?
Does that mean light rail has 26 stops and not the advertised 13?

Shelters? Franklin bus stops don’t even have seats after the first (Hoskins St) stop; so some seats would be great and some shelters – luxury.

Louise Fitzgerald but you have a tram!

Be careful. Only a couple of years after we got our shelters, we lost our bus routes!

Karen Nicholson 😂 our services reduced about 3 months after they added the stop!

Whose idea was it to have glass shelters, so many are smashed, the concrete ones were excellent!

John Boland Ann Eldridge But what did the “focus group “ say??

Bring back the old round ones. At least that sheltered you from the weather. These new ones are worse than useless in the Canberra climate!!

Julia, that’s why they are called bus “stops” and not bus “shelters” any more.

The ACT Government upgraded all bus stops along Longmore Crescent, Wanniassa, 3 years ago. Then they cancelled the bus service that ran along it. Your rates at work.

Wonder if it’ll include buses

The glass is repeatedly smashed. The two near our house have red and white tape across them. They’ll be fixed and a few days later smashed again.

After the reduced bus routes in Canberra, isn’t 50 bus stops all of them??

While the glass shelters may look nice, they’re a stupid idea. Will just keep getting smashed all the time.

Kathryn Ingram that’s the point. That’s why they shouldn’t be glass. Just saying.

They should fix the ones out side of a lot of the schools. Heaps of them don’t even have shelters