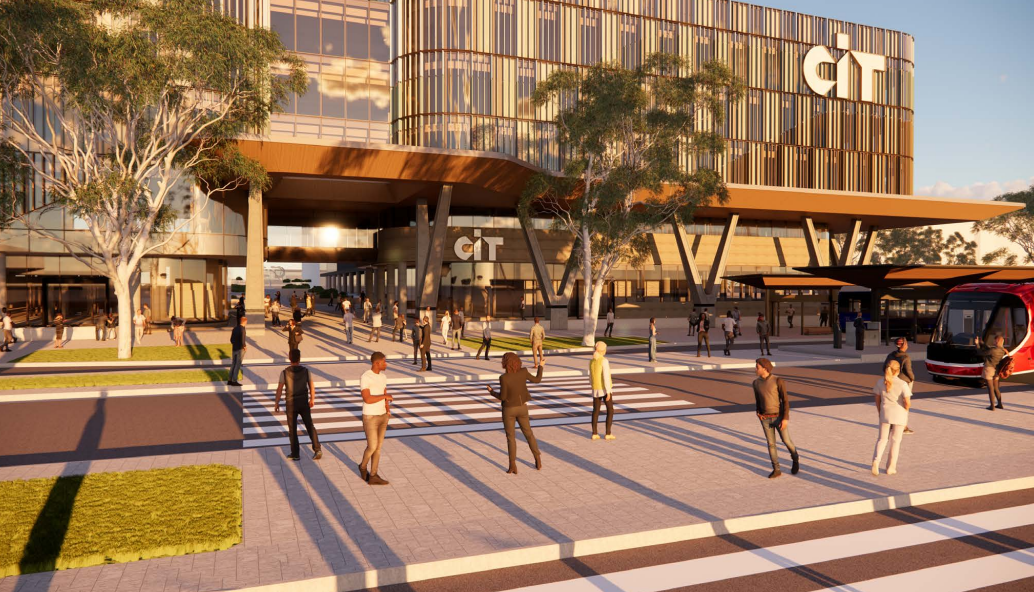 An artist’s impression of the entrance to the Woden CIT on Callum Street showing the new canopy. Image: Gray Puksand.

The updated design for the new six-storey $325 million Woden CIT in Phillip provides greater protection from the elements for pedestrians, more green space and connections to cycle paths.

The project is a step closer to construction this year, with the development application lodged and now open for public comment.

Acting Minister for Skills Rachel Stephen-Smith said these and other changes were in response to community feedback on the project to be built on the former interchange site, which will be integrated with the new transport interchange on Callam Street.

Lendlease will build both the CIT and interchange.

“We know many Canberrans incorporate active travel in their daily commute to and through Woden, that’s why we’ve added safe and secure bike storage conveniently placed close to the new public transport interchange, new public toilets and connecting bike routes, so commuters can quickly and easily continue their onward journey.”

A larger entry canopy has been added, and the overall covered area around the main CIT building increased by creating a 2.7-metre-wide colonnade linking the interchange and the main campus building.

“This has significantly increased the covered pathway from 20 metres to more than 135 metres between the interchange and the town centre,” Ms Stephen-Smith said. 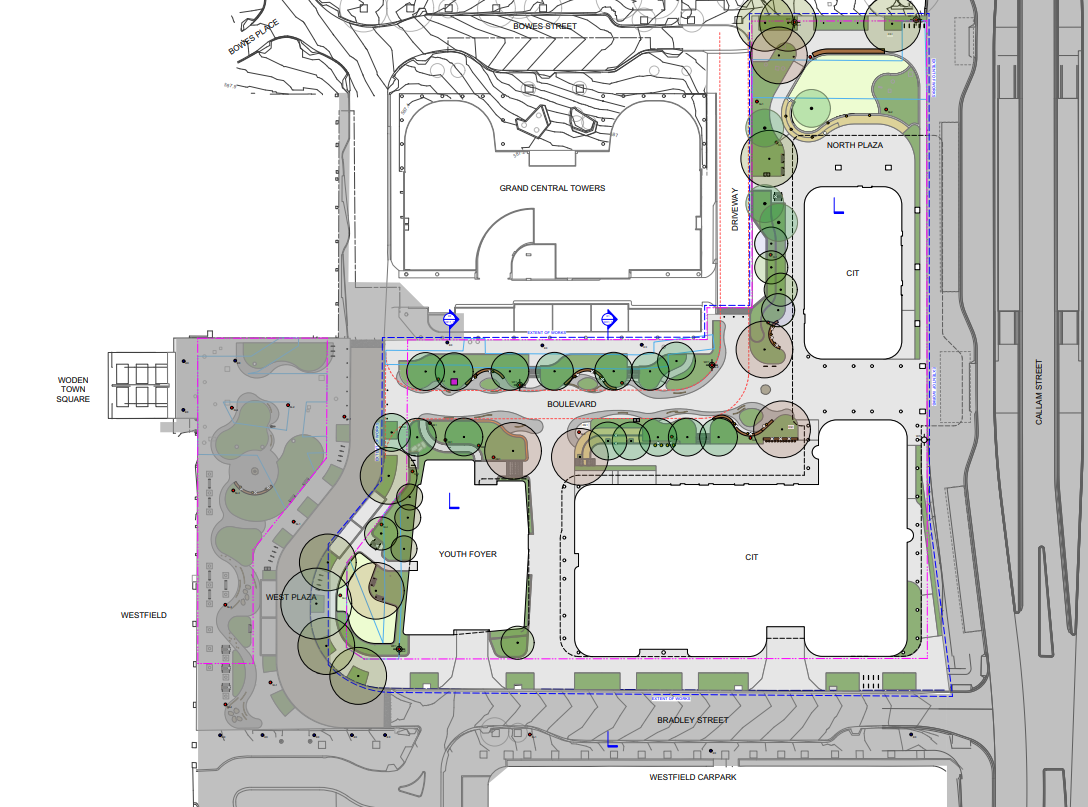 The landscape masterplan for the CIT development. Photo: Aspect Studios.

But other elements questioned by the Woden Valley Community Council, the siting of the 20-unit Youth Foyer student housing block and the through road linking Bradley and Bowe Streets, remain.

But a laneway will separate the Youth Foyer and the CIT and the link road will be a clearly designated shared space.

The West Plaza will likely host community events and markets, according to the responses to the National Capital Design Review Panel recommendations.

Steps to the North Plaza have also been removed in favour of an accessible approach.

The panel also recommended the level 1 terrace be expanded, but this will only be a future option.

It commended Lendlease for working with the context of the “evolution” of the Woden Town Centre and urged it to “strive towards an objective of ‘contextual repair'”.

Lendlease responded: “Our proposed design for the redevelopment aims to re-establish many of the key principles associated with the early master plans for the Woden Town Centre.

“For example, the West Plaza provides a public area in the location of the originally proposed forecourt, the East-West Boulevard is re-established, creating a pedestrian link which joins Arabanoo Park and the Woden Town Square, and generous green and landscaped public areas are proposed to be reintroduced.” 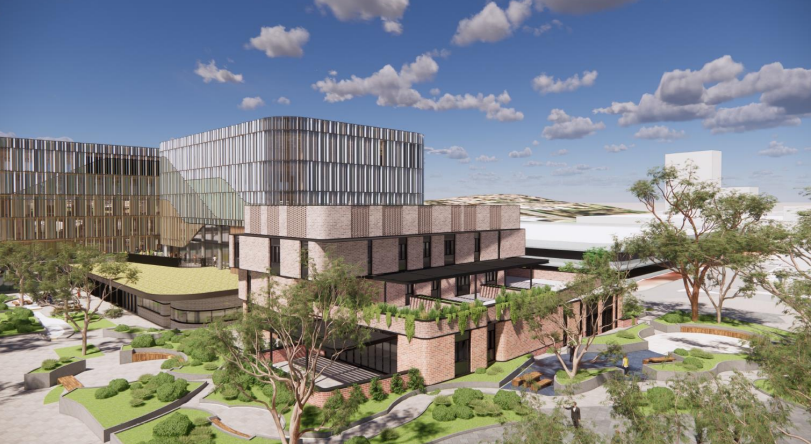 A view of the development showing the Youth Foyer and the West Plaza. Photo: Gray Puksand.

The DA’s traffic report says the proposal will have minimal impact on the operation of the surrounding road network, with any traffic generated to be adequately accommodated.

A 77-space basement car park, with 292 bicycle spaces, is considered suitable, given the central location of the site and the new public transport interchange.

Ms Stephen-Smith said a key feature of the six-star, Greenstar building would be a hall with a large 575 square metre floor space to cater for a range of different events.

She said that the precinct’s new public spaces, family-friendly areas and greater planting and canopy cover would transform the heart of the Woden Town Centre.

“We look forward to moving through the development application phase and towards construction starting in early 2023 ahead of welcoming students into the new educational precinct in 2025,” Ms Stephen-Smith said.

“I encourage members of the community with an interest in the future of the Woden Town Centre and vocational education and training in the ACT to view the plans and have your say.”

Mmmmmm next to nil car carparks, that will work

More green space? CIT Reid was a huge open area with lots of green space and parking. Woden CIT is crammed on a tiny footprint with hardly any green space or car parking for the expected number of students.

There’s pretty shocking public transport to Woden and I’m not sure how many TAFE students will live on the Light Rail line.

“A 77-space basement car park, with 292 bicycle spaces, is considered suitable, given the central location of the site and the new public transport interchange.”

What a load of bulldust – if it was 292 car spaces and 77 bicycle spaces it might be a little closer to the real demands which will be generated by the Woden CIT.

Reality will hit when the Woden mall sales figures drop off because people who want to go there to shop, have a meal etc. can’t get into the mall carparks.

Perhaps they live locally in one of the many towers and catch the bus or tram. The centre has lots of parking. Is it ever full?

Lots of parking , “your joking ” Woden is fast becoming the last place to go , more and more parking is disappearing