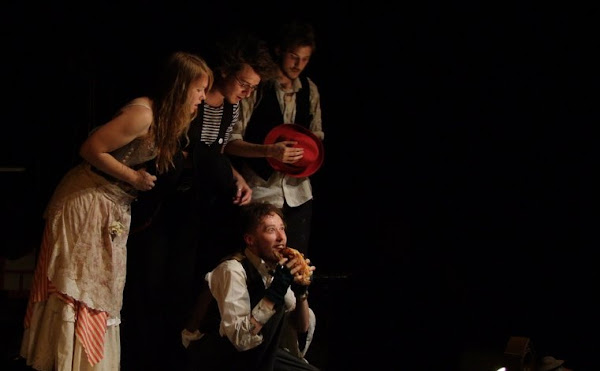 Where do arts grants go?

Facebook has the details of one of the more accessible outcomes:

THIS EVENT IS FOR A RADIO SHOW RUN OVER SIX WEEKS — YOU CAN TUNE IN FROM ANYWHERE IN THE WORLD THROUGH MRFIBBY.COM OR BY STREAMING COMMUNITY RADIO 2XX 98.3FM!

Join Mr. Fibby, Canberra’s number one children’s birthday party band and noted urinary tract infection salespeople, as they regale you of the radio show of the most tragic tale of their disasterous tour across the wild landscape of Australia! Setting off from their home village of Canberra enroute to the Robertson Festival Irish Music Afternoon, Mr. Fibby suffer indignity after indignity at the hands of a cold, uncaring world.

Tune in to Community Radio 2XX 98.3FM on your radio, or stream it through your magic computer box from http://www.2xxfm.org.au/on-air/streaming/ or http://www.mrfibby.com/

Mr. Fibby hail from the delightful eighteenth century seaside village of Canberra, and crash around the countryside presenting their uniquely obnoxious blend of music and theatre. Telling tales of fox spirits, dead men, broke heart gypsies and the blood red Moon, Borracio (cello), Seraphina (violin), Zavi (guitar) & Noimporant (stories) confuse and delight audiences with their enchantingly depressing faux-fairytales of love and death. They have been described as ‘volcanic’, ‘full of sound and fury’, and ‘an inappropriate Act to stage in Robertson, on a Sunday afternoon, after a children’s dance performance’. In 2011 they played with Amanda Palmer (The Dresden Dolls) in a belltower, during a lightning storm.

(there will also be listening parties in Canberra at Smith’s Alternative Bookstore for every show!

“In 2011 they played with Amanda Palmer (The Dresden Dolls) in a belltower, during a lightning storm.”

Yes, and it was wonderful 🙂

Steve Smith - 4 minutes ago
Omid Rezvani I would suggest increase risk to drivers also as there is a higher chance of seriously injuring someone in an ac... View
Sabina Grenwood - 8 minutes ago
Depends on who you are hurting if they get a head injury only themselves attacking others is different. I see private in your... View
John Wilson - 17 minutes ago
And very little risk, Gareth! View
Lifestyle 13

Gary Fynmore - 56 minutes ago
If outdoor pursuits is your thing I can highly recommend Braidwood Outdoors. Dare I say it but it's a fantastic 'man cave ' B... View
News 86

Monique Neejchee Jenkins - 2 hours ago
Absolutely, and getting rid of the school routes is utterly disgusting too. View
Julie Macklin - 4 hours ago
Jeff Smith Maybe you one of the people who will not drop what they expect in a house/unit (thinking first home buyers here) t... View
Jeff Smith - 5 hours ago
Considering the last house in Narrabundah with roughly a 450sqm block sold for $1.2 million and the last similar size propert... View
News 45

Jennifer Chalmers - 2 hours ago
Such a tragedy. View
Ulpu Niemi - 5 hours ago
Tragedy upon tragedy in this battle. 😢 View
Alison Crawley - 7 hours ago
Please consider a donation to this refuge - it will be used for the good of the wildlife. Thankyou. View
Sport 4

Samuel Gordon-Stewart - 5 hours ago
Thankfully Socialist Radio no longer sullies our beautiful national day with its peculiar noises. As such, I hope the people... View
Opinion 126

Robert McMahon - 6 hours ago
Good to celebrate a nation that enables its citizens to openly criticise its institutions and national symbols. Many people w... View
JC - 7 hours ago
What about 1st Jan. Celebrate when Australia came into being when the colony became a federation. Nah won’t work that’s a... View
Wayne Weaver - 8 hours ago
You do know that Cook landed in Australia in April 1770 don't you? Just sayin! View
show more show less
*Results are based on activity within last 7 days

The ACT Government is being urged to boost public transport services and staffing to meet extra demand caused by thousands...
News 58

@The_RiotACT @The_RiotACT
The Defence Force is making its presence felt on and around the South Coast. Lisa Herbert caught up with some of the crew https://t.co/YEwr98vVtk (2 hours ago)