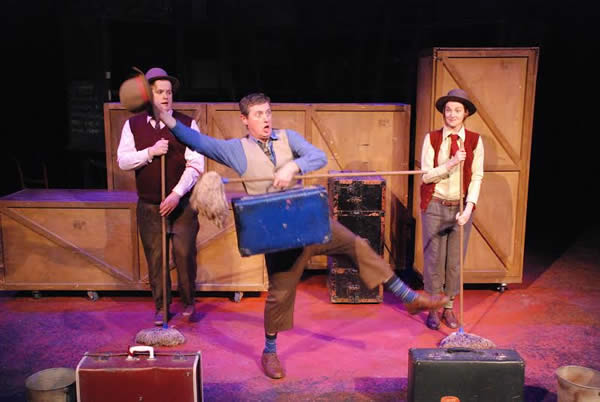 Patch Theatre’s production of Mr McGee enraptured a theatre packed to the rafters with eight-year-olds and brought at least one grown-up (your reviewer) back to childhood. Although from the grins I saw after the show I suspect the parents and guardians in the audience enjoyed the show just as much as I did.

“Mr McGee and the Biting Flea” is the title attraction (although of course first the diva-like flea has to be coaxed out of its tin with a round of applause). There are six stories total by children’s author Pamela Allen, a gentle romp through the adventures of lost ducklings, famished Kings and pantomime cows. Each story has its end, middle and beginning present and accounted for and is told in song by three extremely engaging performers who successfully coaxed their young audience into a different world.

I was reminded strongly of Bell Shakespeare’s current production of Henry V in how the set (in this case an old Australian general store) is ransacked for props that are used in imaginative ways. In one highlight central Sydney is built piece by piece before our eyes out of the stock on the shelves. But while Henry V could be overwhelming, seeking to dazzle us with its own brilliance, here the staging is purely at the service of the story. The three performers become chefs to tell the story of a greedy King using dough props and another story has a two-seater pantomime cow that regularly breaks into two sentient halves (usually so the rear end can give the farmer a good boot up the ass).

If it isn’t already obvious, I loved this show. It was simple, the focus was on storytelling, and the pantomime is so graceful and stylised that it virtually becomes dance. This was gentle entertainment that did not seek to shock or aggressively grab the audience but invited them to relax and be entertained. One young audience member was so delighted with one of the stories that they were not satisfied with the standard allotment of applause time and soldiered on, alone, clapping in solitary tribute until they were made to stop.

Mr McGee is a play with an exceptional level of craft, skill and inventiveness. Unfortunately, it also happens to be a children’s play, so many won’t see it, yearning for (allegedly) more mature entertainment. Well, that’s their loss. Those of us who do go will see theatre at its best. More than once while watching the show I reflected that it was a play that could lead to a life-long love of theatre, and I would not be surprised if a few young audience members would one day trace their own career as performers back to this show. We need more plays like this.

Unfortunately they were only here in the ACT for two days of performances but if you can, try to catch up with the rest of their Australian tour. Bring (or borrow) a child and settle in for a wonderful time.

When and where: http://www.patchtheatre.org.au/mcgee-seasons.html
Price: $22 standard; $52 family of four (varies by venue)

This was a lovely show, and quite good value for the family price.

I’m glad other Canberrans got a chance to see it. A really lovely show.

This was a lovely show, and quite good value for the family price.

Carl Ostermann - 21 minutes ago
In the nineties, it was adventurous gnomes sending their owners... postcards from all over the world View
News 30