Murdoch dips into the Canberra media market with digital launch 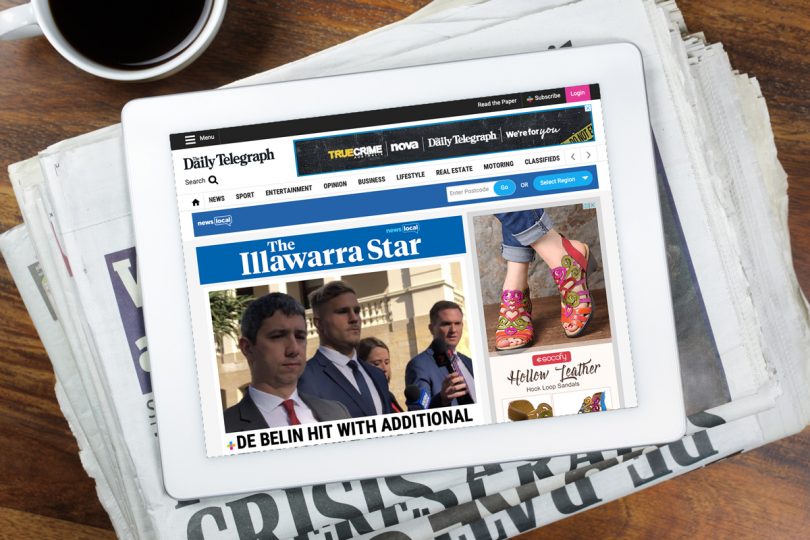 News Corp has announced it will be launching a digital news platform called the Canberra Star which follows a similar platform in Wollongong called the Illawarra Star.

In a further development for the changing Canberra media market, News Corp has announced it will be launching a digital news platform called the Canberra Star.

Kate Christian, who most recently worked on suburban Sydney newspapers the Wentworth Courier and the Northern District Times, is the Star’s journalist.

*Region has been told by News that Christian will be the sole journalist for now, utilising the Daily Telegraph’s existing photography staff in Canberra. News Local’s publisher, John McGourty, also confirmed that the site will be behind a paywall and will syndicate Daily Telegraph content along with locally generated material. Kate Christian is now based in Canberra.

The Canberra Star is described as “a local digital news platform covering Canberra and the surrounding regions. To be launched on June 10, 2019, the Star is News Corp Australia’s first ever website focusing on hyper-local news in the ACT”.

The launch follows a similar platform in Wollongong called the Illawarra Star, which defaults to a Daily Telegraph masthead with some local stories. News has followed the same model with the newly launched St George Shire Standard, which sits with their NSW community newspaper division NewsLocal. Each masthead appears to have a single journalist as a contact point.

A statement from a News Corp Australia spokesman said that the Star would provide “a trusted, true local news source dedicated to the local, important, everyday issues that matter the most to the local community.”

News Corp Australia says it sees opportunities for further digital-only local community publications, following a strategy that’s also been executed by News in the UK, where former News of the World editor Rebekah Brooks has spearheaded an expanded digital push.

News Corp Australia’s COO, Damien Eales told media analysis site Mumbrella last year that the company was seeing success with paywalls for its local publications which have recently passed 500,000 nationally. However, they’ve also sold their half share of the West Australian Community Newspaper Group this week.

Without divulging a great deal about his plans, Catalano has suggested he will look at new ways to monetise the larger ex-Fairfax mastheads, including the Canberra Times, Illawarra Mercury and Newcastle Herald. Although no announcements have been made at this stage, Catalano has flagged the possibility of “consolidation” for print operations.

“Media organisations public and private have largely abandoned investing in their product and have resorted to seemingly never-ending cost-cutting. At the same time that our industry and its established business models have been under attack, our profession is too,” the submission said.

The submission also called for tax incentives and other forms of support for rural and regional news outlets, restored and increased funding to public broadcasting, more rigorous taxation of news aggregators and consideration of direct and indirect government subsidies to media, with safeguards to protect editorial integrity from being compromised.

*Updated to include commentary from News Local publisher John McGourty

No to Murdoch media 🤢

Can’t see this lasting if it is mainly links to the Daily Telegraph, the absolute lowest on the NewsCorp totem pole.

I guess you predicted that Labor would win the election too?

Its a matter of principle to never read his rotten rags.

I like it. I buy the Daily Telegraph for the pictures of footballers and bodybuilders and I occasionally read the articles and I like what I see. I know I can buy it and not see letters from animal rights activists and people supporting the invasion of farms by vegans. Also that there won’t be endless articles supporting “climate change”, refugees and foreign aid which you find constantly in The Canberra Times.

It is long overdue for News Corp to have a presence in the Canberra journalism market. The Canberra Times seems to be pandering to an extreme left wing fringe element and ceased to be mainstream or Canberra’s paper of record years ago.

RiotACT, Reddit Canberra, the Facebook groups as well as the various free newspapers have filled the gap for Canberra news since the demise of The Canberra Times, and if we can have a Daily Telegraph-style online newspaper here then it will only benefit everybody in the long run reflecting views that are rarely heard in Canberra.

“Also that there won’t be endless articles supporting “climate change”, refugees and foreign aid which you find constantly in The Canberra Times.”

As you also find on the ABC and SBS.

I now watch Sky 83 (free) and I am seeing some of the best interviews and more reporting than opinion. I didn’t know much about Alan Jones until I saw him a few nights ago on 83; what a brilliant presenter he is.

How long until murdock owns 100% of Australia's media..He already spoon feeds us propaganda that wins the party of his choosing elections.

The Herald Sun strongly supported the Liberals in the most recent Victorian election and Labor romped in.

And a generally highly-educated population is probably not the ‘right’ market for a Murdoch rag.

Never, I will never support any Murdoch rag, digital or otherwise

Not for me either.

Even though it will be tucked away behind a paywall, and supported by one journalist, the conspiracy theories about the Murdoch empire spreading its tentacles (or some other equally colourful term) into the enchanted realm of Labor-Greendom on the Monaro should be fun – and will be ready to roll in case the unthinkable should happen in October 2020.

Thankfully I'm pretty certain there is almost no market for his rubbish here.

Jacob Kelly I think you underestimate the people of this city

Maybe if it was free, but looks like this will be paywalled, so I have faith.... this time > <

Oh. It’s because we always vote labor isn’t it Rupert?

@The_RiotACT @The_RiotACT
Meet Pablo and Boris, the #alpacas who've taken up residence at the Belgian #Embassy in #Canberra after the Ambassador's pet ducks were killed by foxes https://t.co/oZq8MC4T5S (25 minutes ago)