Must See Comedy at Casino this Thursday 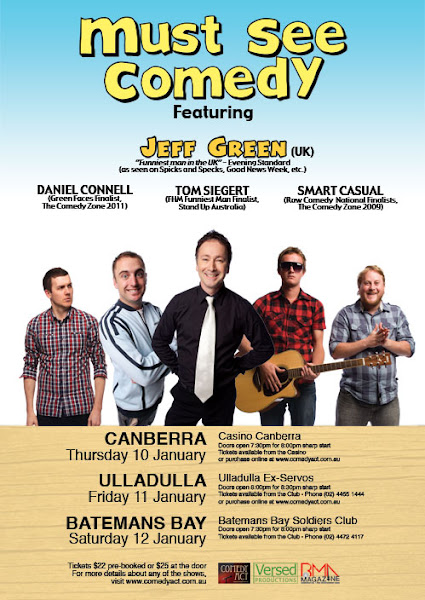 A stand-up comedy show featuring one of the UK’s most acclaimed and experienced comedians and 3 of Australia best up-and-coming comedic talent will hit Canberra in January.

The Must See Comedy tour features the UK’s Jeff Green, known by many for his appearances on television shows such as Good News Week and Spicks and Specks.

“The funniest stand-up in Britain” – The Sun (UK)

“An excellent comedian who knows how to make us laugh, Jeff Green is fast becoming a national treasure” – Daily Mirror (UK)

The Must See Comedy show will be held at Casino Canberra on Thursday the 10th of January and promises to be a great night with a huge line-up of performers also including Daniel Connell, Smart Casual and Tom Siegert as host.

“Definitely keep an eye on this comic” – Herald Sun

Siegert has performed on FHM’s funniest man and Stand Up Australia and Smart Casual on the 2008 Raw Comedy final and The Melbourne International Comedy Festival Gala in 2011.

The Must See Comedy show represents outstanding value, with all tickets only $22 pre booked and $25 at the door.

Tickets are available from The Casino Canberra reception on (02)6257 7074 or online at www.comedyact.com.au.

One thing I have learned about going to see comedy shows, you don’t have to go and see big named stars to have a good belly laugh.

Last nights show was fantastic value for money, all the acts were hilarious with a bonus act from a couple of identical twins (I cant remember their names).

Roll on the Comedy Festival!!!

‘The Stevenson Experience’ James and Benjamin,local lads from Canberra 🙂

I think the twins were called The Stevenson Experience. (and owe each other a couple of hand jobs) while even though I have seen it on several occasions Hawk Hawkings song had me crying again.

I actually think all the supports were better than the main guy, overall it was a very funny night.

Also GoosePig, who turned a deaf ear to my suggestions the front row of a comedy show is a dangerous place to be.

But an absolutely side splitting night.

I was shaking so hard from laughter I couldn’t drink my beer with tears rolling down my cheeks.

One thing I have learned about going to see comedy shows, you don’t have to go and see big named stars to have a good belly laugh.

Last nights show was fantastic value for money, all the acts were hilarious with a bonus act from a couple of identical twins (I cant remember their names).

Roll on the Comedy Festival!!!

Those 2 guys from Smart Casual are F#$%^ ing funny.

Vera Bachinger - 17 hours ago
So we are going to be the victims of more double dipping.. View
Slobodan Paunovic - 19 hours ago
Marc Edwards don't worry about it, can only be more expensive and some sort of public robbery...they need funds for parties a... View
Tom Adam - 22 hours ago
Jorge, yes I was basing my comments on the current claim. View
Opinion 19