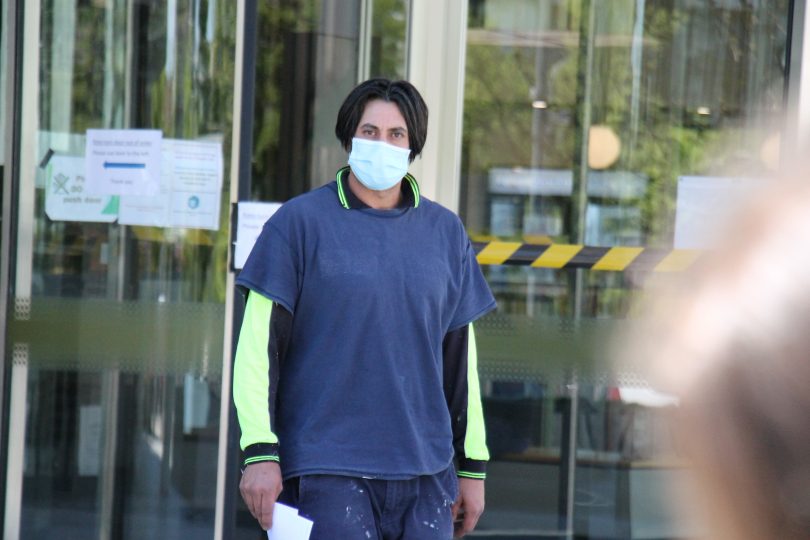 By the time a man’s neighbour yelled to warn him about the intruders outside his door, it was too late and one of them allegedly launched an attack with an axe.

Carlos Prichard, 38, was granted bail in the ACT Magistrates Court on Tuesday (26 October) after he was handed charges connected to the incident that included assault and damaging property, as well as an unrelated charge of possessing a prohibited firearm.

Court documents allege he had gotten into an argument with the man on 21 August 2021 then called him later that day, making comments like, “You’re a piece of sh-t, I’ll kill yah”.

The man was at home alone about 8:30 pm that night when he heard his dog growling at the door, like someone was outside.

He said he opened the door and saw three men, allegedly including Mr Prichard, whom he had known for many years.

He heard his neighbour yell at him not to answer his door, but it was too late and Mr Prichard allegedly swung an axe at him that skimmed his left hand.

The man pulled his screen door closed as Mr Prichard allegedly swung the axe again. He closed the wooden front door, leant against it and used a crowbar to prevent it from being opened.

The man heard his door getting hit several times, leaving behind several gouges, and the three intruders fled when the neighbour yelled that he was calling the police.

When police arrived, the man told them he thought he was going to die during the attack and that he thought the three were going to come into his home and kill him. He was- left with cuts and abrasions to his left hand.

Prosecutor Alexandra Back told the court Mr Prichard had allegedly attacked the man out of some “perceived grievance” and that a witness would not give a statement to police because they feared repercussions.

Legal Aid lawyer Ms Cobden said the father of three worked at Duntroon in a maintenance role and could lose his job if he didn’t get bail.

Magistrate Robert Cook said the alleged home invasion showed planning and a court would normally have little difficultly in remanding him in custody.

But as he had been in the community for over two months since the alleged incident with no more offending, Magistrate Cook said bail conditions could ameliorate any risks if he was released.

Mr Prichard was granted bail to appear in court again on 9 November to enter pleas.