For many, apartments are now the only homes within reach. Photo: Region.

Home prices have fallen for the third straight month in Canberra, but a lack of supply and more buyers mean units and townhouses are holding up better than standalone houses.

CoreLogic’s latest data for September shows an overall dip of 1.6 per cent, but house prices fell nearly 2 per cent while units and townhouses edged lower by only 0.5 per cent as successive interest rate rises did their job.

The Reserve Bank hiked rates for a sixth successive month on Tuesday (4 October) by 0.25 per cent to take the cash rate to 2.6 per cent, giving mortgage holders expecting double that rise some reprieve.

In the last quarter, houses have lost 5.2 per cent in value and units and townhouses only 1.7 per cent, while this year the former have only dipped 1.2 per cent and the latter are still in front, growing 4.6 per cent.

In fact, over the past 12 months, house prices have grown 2.2 per cent and units and townhouses 11.2 per cent.

The median house value is still over $1 million, and for units and townhouses it is $616,000, still the second highest capital city prices in the nation behind Sydney.

CoreLogic’s median values from the same time in 2020 show how much the market has changed and how far prices would have to fall to be anywhere near that level.

But like houses, the supply of medium and high-density homes had dried up at the same time that a flood of new buyers looking for more affordability arrived. 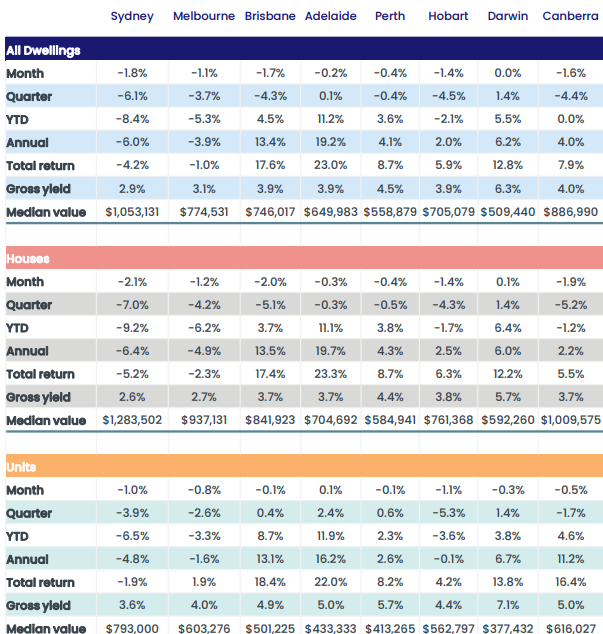 Mr Veraar said the high house and even townhouse prices had driven many buyers into the apartment market.

“There are more buyers at lower price points and obviously apartments are the only dwellings now in those cheaper price points under $600,000,” he said.

“Since COVID, there has been a lack of supply in terms of new DAs. There is a lot less supply than what we are used to.

“Everything that’s out there is sold. There is not much on the market.”

Those who bought off the plan before the market surged would have done very well, even if recently, valuers had not been as bullish due to the interest rate rises.

House prices may still be at high levels but people were still buying, Mr Veraar said

“There are still plenty of people with disposable income,” he said.

“Prices have gone up 30 to 40 per cent in the last two years, so there are a lot of people who have made a lot of money the last two to three years in property, and some of them are starting to put it back into property.”

Mr Veraar said that combination of a low supply and high incomes would help to put a floor under the market in Canberra.

Nationally, the fall was 1.4 per cent in September, easing from August’s 1.6 per cent decline.

CoreLogic research director Tim Lawless said it was probably too early to suggest the worst of the downturn had passed.

“It’s possible we have seen the initial shock of a rapid rise in interest rates pass through the market, and most borrowers and prospective home buyers have now ‘priced in’ further rate hikes,” he said.

“However, if interest rates continue to rise as rapidly as they have since May, we could see the rate of decline in housing values accelerate once again.”