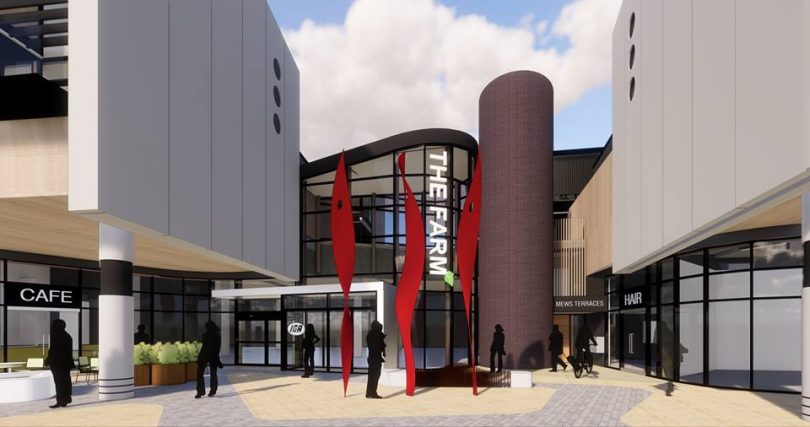 A rendering of the Denman Village Shops, with The Farm supermarket occupying the biggest retail space in the shopping centre. Image: Supplied.

A new IGA supermarket will open in the Molonglo Valley next January, taking up a 1000 square metre space in the Denman Village Shops.

Yass Supa IGA’s Steve Smith is behind the venture, to be known as The Farm at Denman Prospect and occupying the biggest retail space in the shopping centre.

“Before the Capital Airport Group redeveloped the terminal, they toured airports across the world to see what is outstanding. Similarly, the Denman team toured grocery stores to influence the design and create the highest-quality, fresh-food market, unlike anything else in Canberra,” he said.

Mr Smith said The Farm would be a world-class supermarket.

“The design is fantastic, and it will showcase all of the fresh produce and meat people love us for in Yass, but also healthy prepared foods such as sushi and baked goods. We will elevate the local grocery store and give the Molonglo Valley the best selection and a high-quality shopping experience,” he said.

Mr Smith is a community-oriented businessman and has widely supported the local drought appeal, schools and charities.

This will continue at The Farm at Denman Prospect, which will participate in local fundraising, with shoppers able to contribute IGA card reward points to their favourite charities.

The Denman Village Shops is set below 16 residential terraces, with views toward the National Arboretum Canberra. The Farm will be the largest store alongside eight specialty shops, a medical centre, a childcare centre, a gym and a café. Expressions of Interest are currently being accepted for the café space.

“We aren’t just building a suburb,” Mr McDonald-Crowley said. “We are building a community with partners, like Steve, who understand the importance of how strong, community-minded, retail can anchor a neighbourhood. He is an exceptional retailer who will only enhance our offering to buyers looking for a host of amenities to enrich their lives, expansive views, beautiful outdoor spaces and stunning public art.”