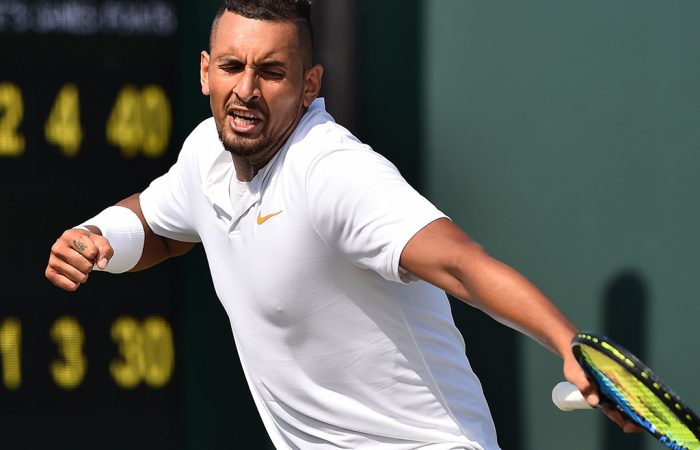 Nick Kyrgios said he feels like he is in a better place this year. Photo: Supplied by Tennis Australia.

There was the usual arguing with the chair umpire, berating his team for not supporting him, a myriad of unforced errors. But with the damaging serve that he possesses, Nick Kyrgios remains a title contender on the Wimbledon grass.

The four-set contest had many mid-match mood changes for Kyrgios, as his attitude fluctuated from intense to laidback during the two and a half hour contest. When asked about how he controls his mental state on court, the 23-year-old referred to it as a tug-of-war.

“I just have so many thoughts when I’m out there. I get so angry and I go through so many different patches in a game,” he said during his press conference after the match.

“I guess it’s so hard for me to find that balance. I look like I don’t care one minute, then the next minute I’m playing really well. It’s a tug-of-war all the time.”

But the Canberra star admitted that he feels like he is in a better mental place this year and remains confident he can make a run deep into the second week of the Championships at the All England Club.

“I’m in a lot better place than I was last year. I came into Wimbledon last year injured, pretty bad mental state. I was out of the game for two and a half months, so coming back, I’ve been excited,” Kyrgios said.

“I guess I’m in kind of like a happy place and I feel like I’m playing well.

“I feel like I’m one of the guys that can cause a bit of an uproar at this event so we will see how it goes.”

"How did you make that?"

Even @NickKyrgios couldn't believe this from Denis Istomin ?#Wimbledon pic.twitter.com/V5qPnzsMPJ