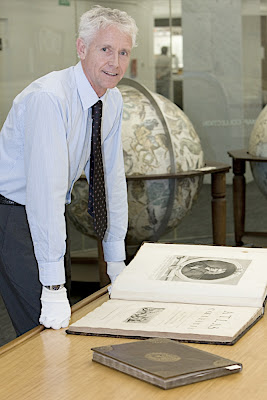 [Curator of Maps at the National Library, Martin Woods with the star atlas, picture courtesy of the NLA]

The National Library has announced their acquisition of a real treasure:

A seminal atlas by the first British Astronomer Royal, John Flamsteed, of particular significance for Australia and the Pacific, has been acquired by the National Library of Australia.

James Cook is known to have had a copy of the atlas on board the Endeavour for use in the Transit of Venus and Southern Hemisphere explorations.

WfG:
“Things as I have experienced them” is entirely different from “All possible experiences, now and throughout time“.
Just because the mass-produced and cheap woodpulp paper you have used since the 1980s turns yellow in a decade, doesn’t mean that all paper does or will.
18th Century ragpulp and cottonpulp papers are the bees knees of papermaking. They are naturally white.

We didn’t use woodpulp paper until the mid 19th century, but as it is cheaper to make by industrial processes, it dramatically reduced the cost of books.
Unfortunately wood has large amounts of lignin (an organic polymer) in it as its a structural component of the trees we grow for commercial purposes. So to use woodpulp in papermaking, we bleach the hell out of woodpulp paper to make it look whiter for longer.
Lignin is now the bane of the 19th and 20th century historical archivist.

The average newspaper reader during the history of newspapers hasn’t been interested in keeping them for long periods.
Printed newspaper copy doesn’t need to be accurate now and forever, just last for as long as necessary for the person paying to read it. (ie: Ideally its accurate enough for people to understand, and the story is only good until the next day’s retraction\clarification, which you will have had to also buy to find out about).
So they barely bleach their newspaper.

Hence, due to the economics of newspaper production vs minimal potential returns on printed newspapers on high quality paper, newspapers turn yellow faster than writing paper as they are printed on barely bleached woodpulp.
Even now, everyone who just wants something to rapidly write\print on probably uses some form of bleached woodpulp.

I’m guessing you buy woodpulp diaries because you’re a cheapskate, and you either don’t care about making any future archivists job easier, or your diaries are of no significant value.

Agreed JB. Not to mention whomever had this in their possessin probably took conservation to a new level as they knew the significance of what they had theior hands on.

I’m a bit cynical about this. How could a volume supposedly from the early 1700s be in such perfect condition? No yellowing or deterioration of pages, the binding and cover like new, the gold leaf still in place. Especially suss since I have newspapers from the 1980s which are brittle and yellow/brown, and also diaries from the 1980s where the binding has had to be patched up with masking tape and pages are loose or missing.

Karen Feng - 2 hours ago
is this an indication that we do not have enough land fornthe wildlife to thrive? theres this road from holt to Fyshwick that... View
News 1