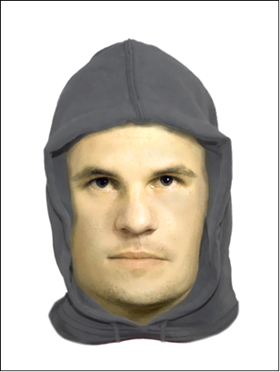 ACT Policing have released a facefit of a man believed to be involved in an aggravated robbery in Braddon on Tuesday (September 17).

Around 5.30pm, a 25-year-old female was walking along Northbourne Avenue in Braddon when she was approached by a male, demanding cash.

The victim did not comply with the demand and continued on walking. The offender then made threats before snatching the victim’s purse and running in a northern direction towards the Fenner Hall building.

Police attended and canvassed the area but were unable to locate the offender. The victim was not injured.

The offender is described as Caucasian in appearance, in his 20’s, approximately 170cm (5’9”) tall with medium build. He was wearing a dark grey hoodie with a white stripe on either side of the zipper, dark jeans and white joggers.

Sorry, Stuart Flats in Griffith should be bulldozed first.

They don’t have the advantage of passing trade, so plunder a good 5 or 10 nearby suburbs.

Exactly what I was thinking.

I hate to judge but I’d say you’re suggesting the same as what I’m thinking… Those dodgy old flats on Northbourne Avenue??

I walk well away from those at night when I’m walking to Civic.

The entire stretch of Northbourne flats should be bulldozed.

An ANU student from Fenner Hall you say?

Edgar Sharp - 24 seconds ago
Not "therefore" ok. If you aren't willing to understand the varying levels of offence then I think you are doomed to a life o... View
Neenie Baines - 6 minutes ago
David Ward she doesn’t it daily. I live in the same suburb as her. She flies though those 40 zones like she thinks the law... View
Zoë Clews Tibbitts - 8 minutes ago
Edgar Sharp that's a low bar - not corrupt, just repeatedly breaking the law, so therefore ok? View
News 18

Julia Ross - 38 minutes ago
Corey Karl hmmmm, money has changed hands methinks. View
John Elliott - 17 hours ago
I live within 100 metres of the Establishment and I don't see a problem. So many people are whinging and complaining. The bui... View
News 6

Mark Dando - 1 hour ago
I don't get the level of coverage here of the views of these self-appointed 'guardians'. If the comments on this and the prev... View
Liam Matthew - 2 hours ago
There is not significant community disquiet about the proposed development. Calling yourself the Guardians of something doesn... View
HSewell - 4 hours ago
Genuine question: why should we pay attention to a self-appointed self-named group like the "Lake Burley Griffin Guardians"?... View
News 1

Acton - 5 hours ago
Will resisting arrest constitute assault against a police officer? What if you resist arrest while at a peaceful demonstratio... View
Gregg Heldon - 7 hours ago
It's the ultimate disrespect, isn't it? And should be treated as such. The real question is, will the court protect those who... View
News 1

Warwick Alsop - 5 hours ago
I don't disagree necessarily, although we do still have a guaranteed full week of work that isn't just cancelled on a whim by... View
Archie Mac - 9 hours ago
The amount of young people in Canberra who are given an unpaid ‘trial’ needs to be investigated too View
Opinion 2

Acton - 8 hours ago
The Greens fail to practice what they preach. The voices of the community are routinely ignored by the Greens/Barr ACT Govern... View
News 22

A David and Goliath struggle between a YMCA childcare centre and developers has been resurrected by a new development application...
Business 7

A groundbreaking decision by the Full Bench of the Federal Court is likely to have significant implications for any employers...
Community 2

With Canberra’s frosty winter mornings just around the corner, there’s nothing nicer than a hot shower to warm you up. So nice...
News 18

@The_RiotACT @The_RiotACT
With lockdowns easing, life is slowly returning to normal. To help discover what's on, the ACT Government has launched RISE Canberra - your new home for experiencing local events https://t.co/0OBQBv40Ui (3 hours ago)