Norvan Vogt in the Sim Canberra challenge – The Verdict 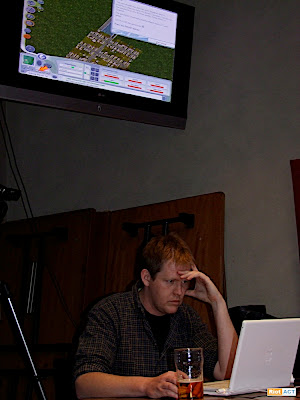 In our open challenge to candidates in the 2008 ACT Election the Community Alliance’s Norvan Vogt was the first to man up and sit down in front of a rowdy audience in All Bar Nun to show off his city management skills.

Norvan kept his population happy and managed a major disaster well, but also ran up a ferocious debt.

After an hour of play Norvan still hadn’t looked at his cash flow. But he had built an airport connected to his city by a monorail (yes! Monorail!), after persistent heckling from a crowd wanting to know when he’d build some real public transport infrastucture.

This prompted the people to award him a statue.

Immediately after that his starting money ran out and he turned to debt.

Schools and ambulances were hardest hit in the budget cutbacks and Norvan agreed to take garbage from neighbouring cities.

Following the cutbacks the power went out as the under-funded electrical utility collapsed.

Norvan responded by restoring funding where needed and bumping up his high density zoning in the inner city.

In year five his population reached 10,000 and he turned to god building the first house of worship.

Throughout all this his mayor rating stayed at a high seven.

And he persisted in building his monorail loop through the financial crisis.

While coming to terms with his finances Norvan jacked up taxes on dirty industry.

In the mean time his citizens suggested that lost cars could be found in the potholes developing in his roads.

In a bind dubious interests offered to “help”.

Norvan took a supermax prison, a nuclear missile base, and an army base, but drew the line at accepting toxic waste.

He also bulldozed a residential neighborhood to build his council chambers.

Looking to his fourth year he declared “things are heading in the right direction”.

The hard work lead to more development, in year 7 he declared “come hell or high water I will finish this monorail”

While he was at the bar an earthquake struck the city. It conveniently knocked down his high density – low employment slums. But it played merry hell with his water supplies and previous redundant design saved the day.

Subsequent fires in the industrial city threatened to overwhelm his firefighting resources, but were eventually brought under control.

The power promptly went out until he was able to build more wind turbines to meet burgeoning demand.

Three universities serviced a population of 15,000 and a radio broadcast tower had just become available.

His ratings according to the game:

Environment: Pure red. (despite a commitment to public transport and extensive park building)

The Canberra Votes video of the action is below:

And still no mention of their policies.

CAP = Community Alliance Party.
There’s been quite a bit of discussion about them on Riot Act so far.

Just whom are the CAP ?

Last time we heard of Norvan he was the Democrats next big thing.

I like the outcome, happy residents plus big debt. For short term canberra residents, like myself, I am more then happy for the place to take on debt to be repaid in the future if I get the short term benefits while I am here.

That would have been something like trying to have a D&M with somebody dangling from a rope over a canyon of hungry crocodiles. It just really didn’t seem like the most opportune moment to tackle him on policy.

Looks like everyone had a good time.
Did anyone get the opportunity to ask Norvan some serious questions about Community Alliance Party policies? I’d be interested to read what you thought of his answers on the actual policy stuff.

Sorry, jakez. Shot from the hip. I guess my comments in turn were more directed at the nay-sayers. No offence intended.

Only if they neglect their health system.

Does it have cholera?

Disasters come from our clever and cunning disaster randomisation system.

Good on you for having a go, Norvan.

Sorry, jakez. Shot from the hip. I guess my comments in turn were more directed at the nay-sayers. No offence intended.

I know that wasn’t the point Overheard, it was the people who were taking it too seriously that I had concerns for. I think if you bothered to go through the original thread you will find that I make a comment that this thing will be a good bit of fun.

Serious judge. Well, that was the intent, wasn’t it? I saw representatives of ABN McNair, Rehame and Newspoll hanging around outside Flatheads doing exit polls. I personaly raced home to file my update for the Lehrer/McNeil newshour.

Thanks again JB and Jazz for a diverting bit of entertainment (with some indicativeness in there too). Good to meet some more Rioters and put a few more faces to names.

And good on you, Norvan. Heel goed gespelen, meneer.

In Norvan’s defense, the SimCity4 tutorials are terrible.

And in-game things can get really counterintuitive, like a single row of ordered trees will prevent air pollution spreading from coal fired power stations, and that same row of trees can save an entire town’s water supply from agricultural contamination.

In Norvan’s defense, the SimCity4 tutorials are terrible.

And in-game things can get really counterintuitive, like a single row of ordered trees will prevent air pollution spreading from coal fired power stations, and that same row of trees can save an entire town’s water supply from agricultural contamination.

Not that version no.

He did get a go on the tutorials before he started for real.

HAHA, I’d be terrible at this game. I’m sure there’s a zoo option but I’d refuse to build it, yelling at the computer screen “build your own damn zoo, I’m not stopping anyone”.

Had Norvan played Sim City 4 before?

Michael Ilsley - 3 hours ago
How lucky are those children going to be being taught by such an incredible person. View
Rhonda Maxwell - 6 hours ago
Brad is an amazing young fella who is living a full life. His family and friends are s wonderful support as is his footy team... View
Pam Perkins - 7 hours ago
A very inspiring young man all the best in all your future endeavours and wonderful community support... View
Community 10

JC - 5 hours ago
It was a private facility unlike those in Kambah which you describe. The only fault of Government here is that they have let... View
Simon Noffke - 17 hours ago
Sad to see the end of memories coaching there many many years ago View
Community 4

aussie2 - 18 hours ago
Firstly I would be challenging directing all southbound traffic to Woden interchange. We are spread out. Surely those outside... View
chewy14 - 20 hours ago
I actually like what they are proposing here and I think integrating the CIT into the new development space is a sensible mov... View
JC - 1 day ago
So true. It’s far easier to whinge about anything and everything. Though think the core issue is many here just don’t lik... View
News 9

A Canberra father accused of repeatedly beating his wife and choking their daughter will be released from custody after he...
Courts & Crime 0

The currents of time – how water shaped Canberra

@The_RiotACT @The_RiotACT
Despite their scary appearance, blue-tongue lizards are laidback and loved in Canberra. Ian Fraser asks if there's a familiar bluey in your backyard? https://t.co/pTVszMYre7 (2 hours ago)