Experts in buying, selling & renting
Your property, your future
14 May 2020

"Nothing can be guaranteed": ACT border communities watch the fires and wait 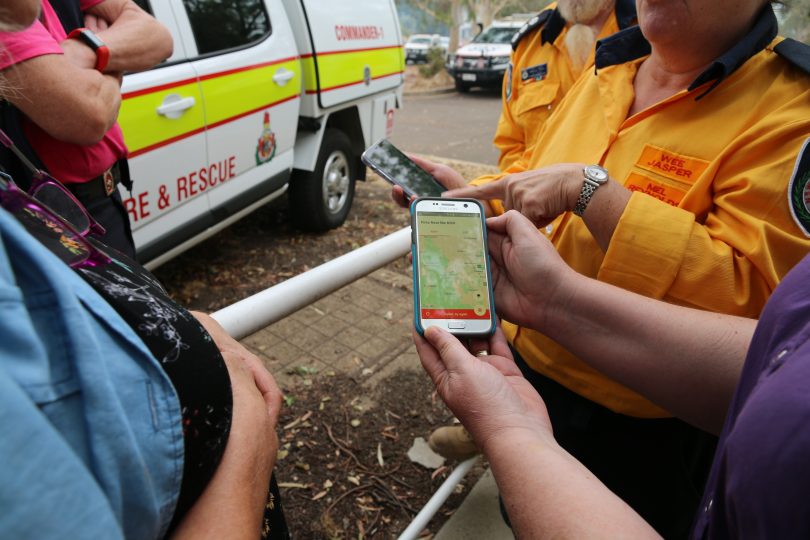 Uriarra residents are trying to set up watch zones on the Fires Near Me app outside the community meeting on Sunday (12 January). Photos: Dominic Giannini.

The fire threat on the ACT border is of considerable interest but not immediate concern to many in the ACT’s urban centre. But it’s a different story for people in Tharwa and Uriarra, who lived through the 2003 bushfires and are now watching and waiting for what the weather brings.

The level of fear and concern is palpable. People are learning how to set up watch zones on the Fires Near Me app. Everyone wants to know when and where the fire will hit.

But the answer is always the same: we just do not know.

Some will fight, some won’t, some have water, some don’t. But the one thing everyone agrees on is that communication this time around has been much better than in 2003.

“We smashed it, we drowned it”

The biggest threat to the ACT has been the Marys Hill fire, behind Mount Bimberi, sitting around 5 km west from the border, and the Dunns Road fire, which has now engulfed the Atkinson fire 20 km west of the ACT border.

Firefighters have been doing everything they could to tackle the blazes and take advantage of the recent cooler days. Favourable conditions have helped slow the spread of the Marys Hill fire and ESA commissioner Georgeina Whelan said on the weekend that it had not broken containment lines.

Remote area firefighting teams, heavy tankers and crews, and aerial and Australian Defence Force support have been deployed there.

While these fires are 33 km (Marys Hill) and 47km (Dunns Road) from the urban interface, over 400 NSW RFS, aided by extra ESA firefighters, have been working together to contain them. The Adaminaby Complex fire is 2 km south of the border, but 48 km from the suburban edge of Canberra.

Manager of ACT Parks and Conservation Service Brett McNamara, who lost his house in the 2003 fires, has described the fires to the west as a sleeping monster knocking on our door.

“We have come along way from 2003,” he said. “I would know, I was there in the witness box [at the Coroner’s Bushfire Inquiry].

“We [ACT Parks and Conservation Service] started preparing 15 years ago. We have a gold-plated network of fire trails. Within two hours through some incredibly remote, rugged country, we had ACT crews on the Marys Hill fireground.

“At Hospital Hill, we hit it hard and fast. We smashed it, we drowned it.”

Speaking on the weekend, ACT Rural Fire Service (RFS) Chief Officer Joe Murphy said the ESA is better resourced than ever and the ACT has been lending support across the border to the NSW RFS at the Dunns Road fire.

“There is a bucketing helicopter on this morning [Sunday 12 January], the Firebird 100, which is our observation helicopter, and between 15 and 20 Parks and RFS tankers were on their way there this morning,” he said.

“What Commissioner Georgeina Whelan has done is put in place the largest incident management team I have ever seen in the ACT, and they are working around the clock to keep the intel going to make sure the community is well messaged.

“We are doing everything we can to make sure that the fire does not get to the ACT.”

The ESA has Liaison Officers in the Tumut and Cooma fire control centres and the NSW RFS State operations control centre to ensure information is passed back as quickly as possible, Mr Murphy assured the community. 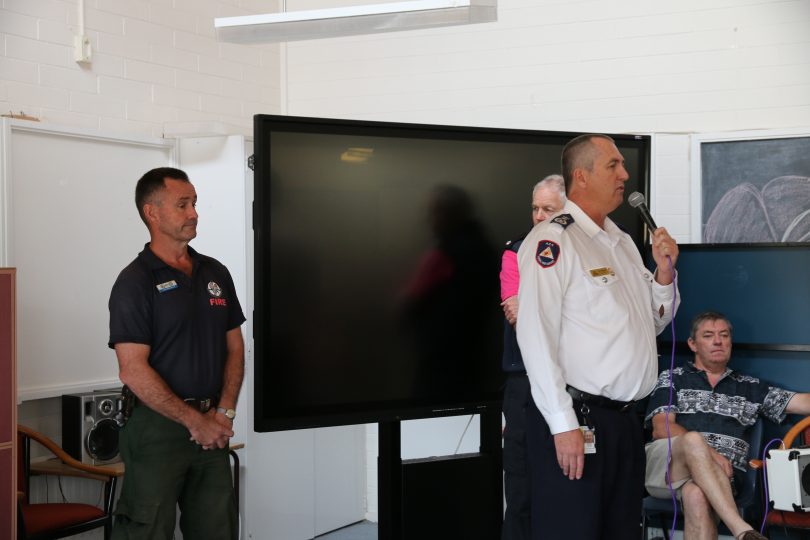 But the ESA has warned residents if the worst were to happen, resources will be stretched.

However, residents want to know if they will be granted access to their properties to fight should the fire encroach on the border.

“We are prepared, we have all the equipment, but what use is it if we are not allowed onto our property to fight?” one Tharwa resident said.

Commissioner Whelan has said there will be no forced evacuations in the ACT, and that roadblocks will operate in a three-tiered system.

When a fire is at advice level, landholders and support like family and friends will be allowed past a roadblock, and the same will apply during a watch and act; however, they will be warned against it.

When a fire is upgraded to an emergency level, all bets are off, Commissioner Whelan said.

“Residents who want to return home during the warning period will be allowed access to defend until warning level hits emergency,” she said.

“We will not allow you to enter because we cannot guarantee you will get back to your property.

“Other members might be evacuating in the opposite direction and this can create confusion and congest traffic.

“If it becomes too dangerous I will pull my firefighters out, and the same goes with the aircraft. If evacuation is likely we can put a request into NSW but nothing is guaranteed.” 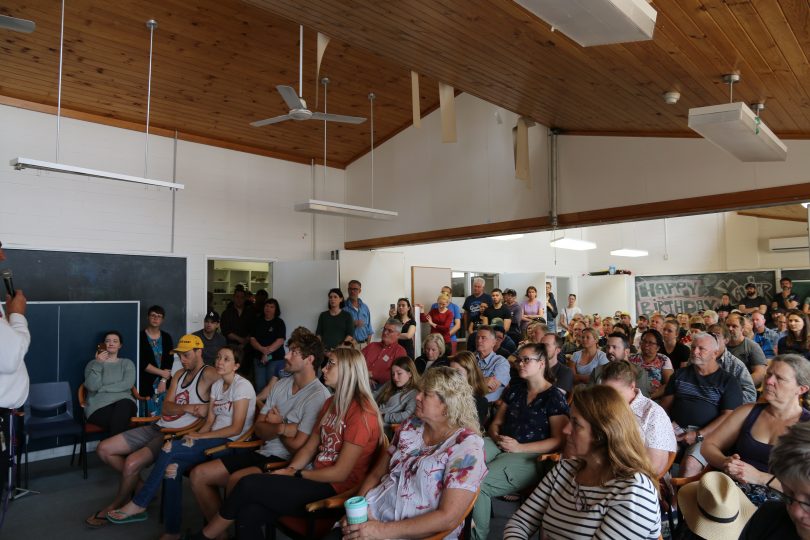 And while some people will want to stay and fight, gathering family and friends to help them out, residents who have fought the fires told the community meeting that there are some you just cannot fight.

One man fought in the recent Adelaide Hills fire. The fire put his mate in hospital.

“Sometimes you just cannot fight. Get out early,” he advised the meeting.

Residents in bushfire prone areas are being urged to have a bushfire survival plan in place and closely monitor the ESA website and social platforms, as well as the Fires Near Me app.