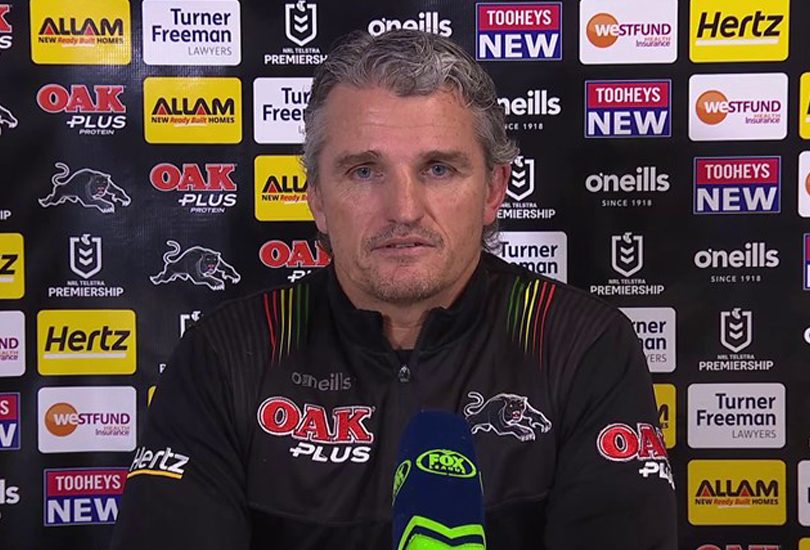 Penrith coach Ivan Cleary has been fined $20,000 for questioning referee Gerard Sutton’s integrity following his side’s 28-12 win over the Raiders.

The 49-year-old suggested Canberra “were being managed back into the game” after some questionable calls in the second half. The comment drew the ire of Australian Rugby League Commission chairman Peter V’landys who described the comments as “deplorable”.

The NRL executive met on Monday and handed Cleary a breach notice for the incident.

“I am disappointed that a person in a leadership position within our game has made comments that question the integrity of our officials,” CEO Andrew Abdo said. “Our leaders should be professional and set the standard for our game.

“Comments like this will not be tolerated. The foundation of our competition is its integrity and Ivan’s comments undermined that.”

The win was a club record-equalling eighth straight for Penrith who sit on top of the ladder – eight points ahead of the fifth-placed Raiders.

Raiders backrower John Bateman is free to face the Brisbane Broncos on Saturday night after avoiding a sanction from the NRL match review committee for a dangerous tackle.

The Englishman was lucky not to see his name on the charge sheet for a late high shot on Penrith centre Stephen Crichton in the dying minutes of the Raiders’ loss to the Panthers, an incident that saw referee Gerard Sutton place him on report.

Coach Ricky Stuart could ill afford to lose Bateman again given he only returned from a long-term injury 10 days ago to bolster their depleted forward pack.

Hooker Siliva Havili’s injury is the primary cause for concern after the bruising encounter that saw the Green Machine’s three-match winning streak come to an end.

The Tongan international sustained a triceps injury early in the second half but is a strong chance to pull on the number nine jersey this weekend.

“Club medical staff will work with Havili this week on the appropriate rehab for the injury, but he is expected to be available for Saturday’s match,” the Raiders said on Monday.

If he is not available, third choice rake Tommy Starling could be thrust into the limelight and start for the first time in his eight-game NRL career. The rookie has seen a significant increase in game time in recent weeks following a season-ending knee injury to co-captain Josh Hodgson.

The Raiders will fancy their chances against a Broncos side in disarray after four-straight losses and multiple COVID-19 breaches.

Backrower Tevita Pangai Junior is facing a fine and two weeks in isolation for breaking the NRL’s strict biosecurity protocols by attending the opening of a barbershop linked to a prominent bikie gang.

Assistant coach Allan Langer and two other staff are currently in quarantine after attending a function at a popular Brisbane pub, while coach Anthony Seibold will also miss the trip to Canberra Stadium after staying in Sydney following his side’s loss to the Rabbitohs to attend to a family matter.

Ivan doesn’t watch many Raiders games if he thinks we ever get ‘managed back into’ games by the referee. Dumb comment from a rattled coach.

Good. He deserved it. Nothing worse than a bad winner.

If Cleary reckons the refs and bunker are crook, then Cleary would have been on the end of many a ‘dubious call’ that assisted his team.
‘Tis a strange thing that coaches never comment on what commentators call ‘ they got away with one there’.
Perhaps he should be reminded about some of them.

I was amazed that Panthers player Chrichton wasn’t sent off for his coat-hanger on Croker. It wasn’t even put on report. If Croker had stayed down maybe something would have happened but he isn’t that type unlike the Panthers players who were taking dives to milk penalties.

The commentators on Fox should also take a long hard look at themselves.