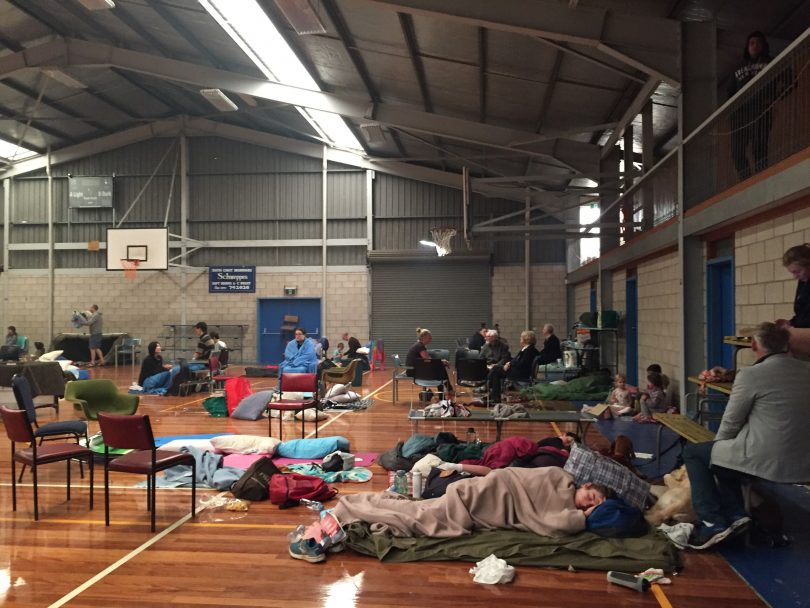 People waking up at the Moruya Basketball Stadium on 1 January. Photo: Lisa Herbert.

As the Far South Coast begins to put together the pieces of a horrific end to 2019, the two men who died while trying to save their house west of Cobargo have been named.

Father and son Robert Salway, 63, and Patrick Salway, 29, were prominent members of the Bega showjumping community. They died in the blaze as they stayed to defend their property in Wandella, 10 km west of Cobargo.

The scale of complete fire devastation on the South Coast is becoming clearer as hundreds of buildings have been lost around Batemans Bay, and Mogo is described as unrecognisable. Power and telecommunications have been cut along a 200km stretch of the coast and three lives are confirmed lost. Genevieve Jacobs reports on the latest news.

The fire tore through the Bega Valley town of Cobargo early Tuesday morning.

Patrick Salway’s wife, Renee, wrote a tribute to her best friend and husband on social media.

“I love you now, I love you still, I always have and I always will. I will see you again Patrick, my best friend. Hope you are up there ‘fixing things in the stars tonight’. Love forever Harley & Me.” 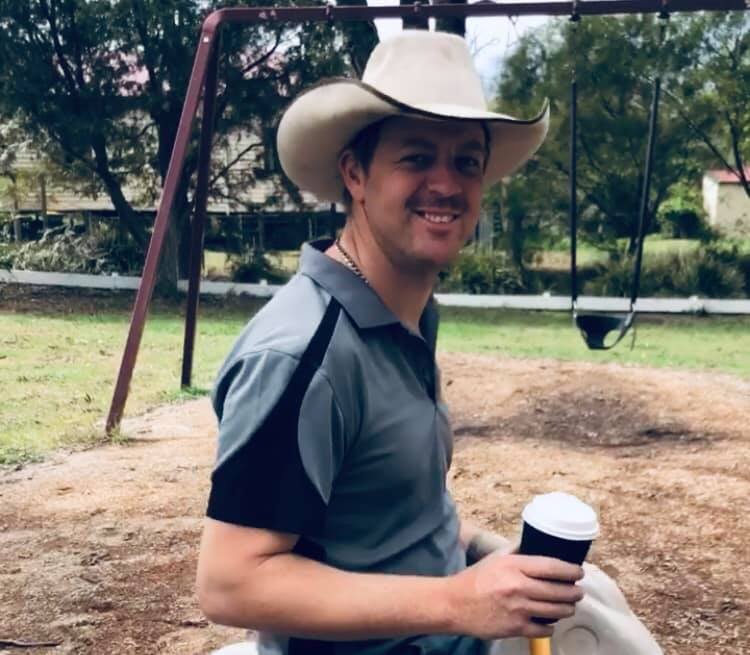 Patrick Salway, who died with his father while trying to save their house. Photo: Facebook.

A 72-year-old man is still unaccounted for at Belowra, about 50 km north-west of Cobargo.

Police have also confirmed a third man has died in bushfires on the state’s South Coast.

At about 7.30 am today (1 January), officers from South Coast Police District were informed the body of a man had been located in a burnt-out car on a road off the Princes Highway at Yatte Yattah, about 6 km west of Lake Conjola.

The man has not been formally identified.

Bega Valley Shire Council mayor Kristy McBain briefed the community who had evacuated to the Bega Showground at 8:30 am this morning.

Fighting back tears, Ms McBain said yesterday was one of the most challenging days in the shire’s history.

“The bushfires have claimed the lives of some great people, along with the homes and businesses of many more,” she said.

“It is in the most difficult of times that the challenges of a community are put to the ultimate test. Once again, the spirit of our people and the brilliant work of our firies and other emergency services personnel shone through the pall of an intoxicating smoke haze.

“The battle remains ongoing, but the work done to this point has been truly remarkable.”

People are being advised to stay away from Cobargo, which has been heavily hit by the fire.

“Sightseers in some locations are causing an issue for emergency services. Please stay away from places like Cobargo which has been heavily impacted. You are placing yourself and others at risk,” Ms McBain said. 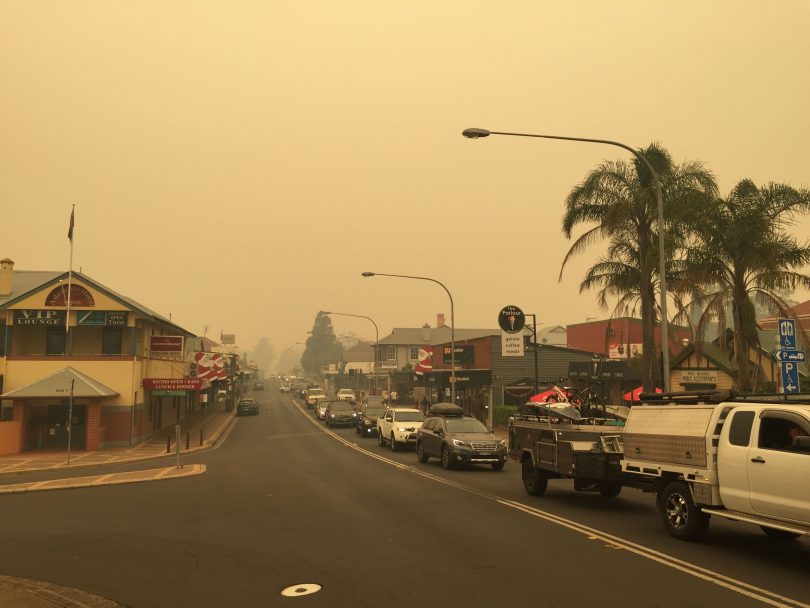 Evacuation centres are in place at Bega Showground, Club Sapphire in Merimbula, the Eden Fishermen’s Club and the Eden Country Club.

People with caravans and the ability to camp can also go to Pambula Sporting Complex, Berrambool Oval at Merimbula and the Tathra Country Club. Limited toilet and shower facilities are available. The Pambula Surf Club is also open for showers.

The Live Traffic website says the Princes Highway remains closed between Falls Creek and Milton, between Batemans Bay and Moruya, between Brogo and Tilba Tilba, and between Narrabarba and Cann River (Victoria). Motorists are advised to avoid these areas.

Further up to date information, including road closures, is also available on the Bega Valley Shire Council Facebook page.

Further north, Batemans Bay was hit by what has been described as “the perfect storm” of fire conditions.

Residents from South Nowra through to Moruya, and possibly further, are likely to be without power and communications for days.

Federal MP Fiona Phillips told the ABC the scale of destruction in the Batemans Bay area has been enormous.

“The building loss we believe around the Batemans Bay area and Mogo is in the hundreds. It’s very, very significant.

“The industrial area at Batemans Bay has certainly suffered significant damage and the Mogo CBD is unrecognisable.”

There are reports of significant property losses at Rosedale and near Malua Bay, including the Malua Bay Bowling Club which was destroyed.

There are no shops open in the area due to power outages, and there are reports that no petrol stations are open.

The video below was posted by the NSW RFS following the fire emergencies on the NSW South Coast yesterday.

Acting duty commander with NSW Fire and Rescue Craig Mashman said he had been worried about a fire coming into Batemans Bay for some years.

A Public Information and Inquiry Centre has been opened to assist members of the public in relation to bushfire information for the South Coast areas. The telephone number is 1800 227 228.

Members of the public are reminded to delay all non-essential travel in fire-affected areas to assist emergency services.

The tiny holiday hamlet of North Rosedale was a scene of utter devastation this morning after fire tore through the area yesterday with an estimated 50 homes being lost. More news about the fires at: http://bit.ly/NSWsouthcoast

Use the Register.Find.Unite service to register your location, and find and reunite with family, friends and loved ones after an emergency. For a list of evacuation centres visit Disaster Assistance. 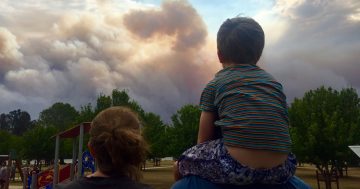 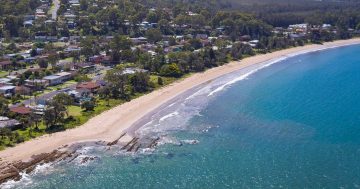