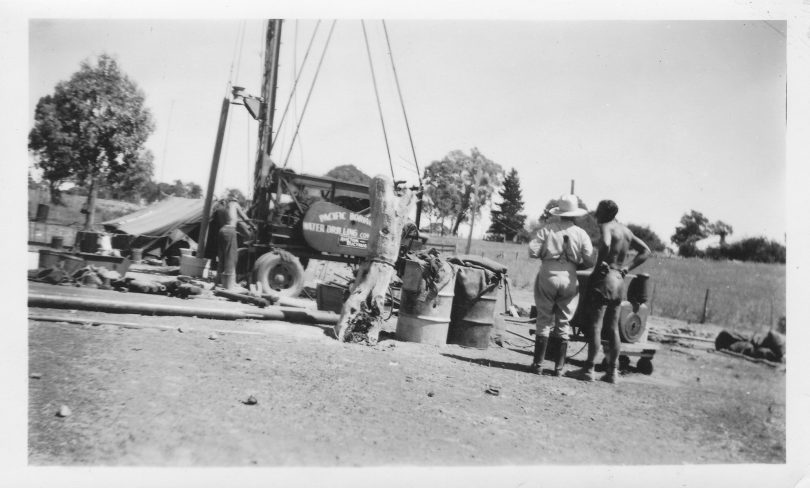 Ten folders of photographs and negatives donated to the Yass and District Historical Society archives have helped reveal details of generosity, hard work and a Murrumbateman long gone.

According to an attached note, Roy and Heather Taylor were the kind donors of the photographs and negatives. These photos were from the days of cameras and rolls of film which had to be developed. The exposed roll of film would often be left with a Kodak agent who then sent them away.

Even in the 1960s, it might take a week to get your photos and negatives back.

JJ Skehan, chemist and Kodak dealer of Yass, forwarded some of the packets, while some were handled by John Brown of Murrumbateman: Reasonable Prices, Reliable Goods, Ready Service.

All the photos were connected to the Murrumbateman family of Joshua and Evelyn Armstrong, who owned ‘Dundoos’.

Stanley Ablamowicz, a decorated World War II Polish air force pilot and a trained engineer, had arrived in Australia in 1947. In Sydney, he met Sir Walter Merriman, who encouraged him to go to the Yass district.

According to the extensive collection of Pacific Boring Company log books held by the Yass Archives, Stanley went on to control seven separate drilling rigs which operated throughout southern NSW between 1947 and 1970, including sinking 56 bores on Merriman properties, projects for the National Capital Development Commission in Canberra, and even the Atomic Energy Commission at Lucas Heights in Sydney.

However, the vast majority of his clients were landowners and pastoralists desperate to secure a reliable water supply to see them through the reoccurring droughts which were so much a part of farming life.

The inscription on the back of one of the photos has the date January 1952 and reads: “JC Armstrong and bore worker (new Australian), and Pacific Boring Company’s machinery putting down a bore on H White’s village bore.”

Fortunately, an interview with Bob Wilson from ‘Mountain View’ at Jeir was able to add to the story.

READ ALSO You hoarded what? Dear Charli, let me tell you about when you were born…

Bob’s family had been burnt out in the bushfires of 1944 and Joshua Armstrong had loaned them a cottage on ‘Dundoos’ for 18 months while they got back on their feet. Bob explained that the village bore was put down on his uncle Harold White’s place at Murrumbateman, by Joshua Armstrong , to provide the few rough houses – he thought about six – in the village at the time with a reliable water supply.

Further checking of the log books for Pacific Boring Company held by the Yass Archives confirmed that working up to 14 hours a day, Plant 3 had sunk a bore on Portion No.10 at Murrumbateman, starting early January 1952.

There is so much more to tell here but the photos, log books and descriptions of drilling operations gleaned from these records – plus Bob Wilson’s recollections – add up to paint a powerful picture of Murrumbateman from another time.

These are the stories the archives’ volunteers love piecing together. If you happen to have more pieces of the ‘jigsaw, please contact the archives at yassarchives@gmail.com. We would love to hear from you.

Judith Davidson is the publicity officer for the Yass and District Historical Society.

Original Article published by Judith Davidson on About Regional.

It looks like Mr Ablamowicz went on to stand as a Liberal Party candidate in the state seat of Burrinjuck in 1965 -https://www.parliament.nsw.gov.au/electionresults18562007/1965/Burrinjuck.htm.