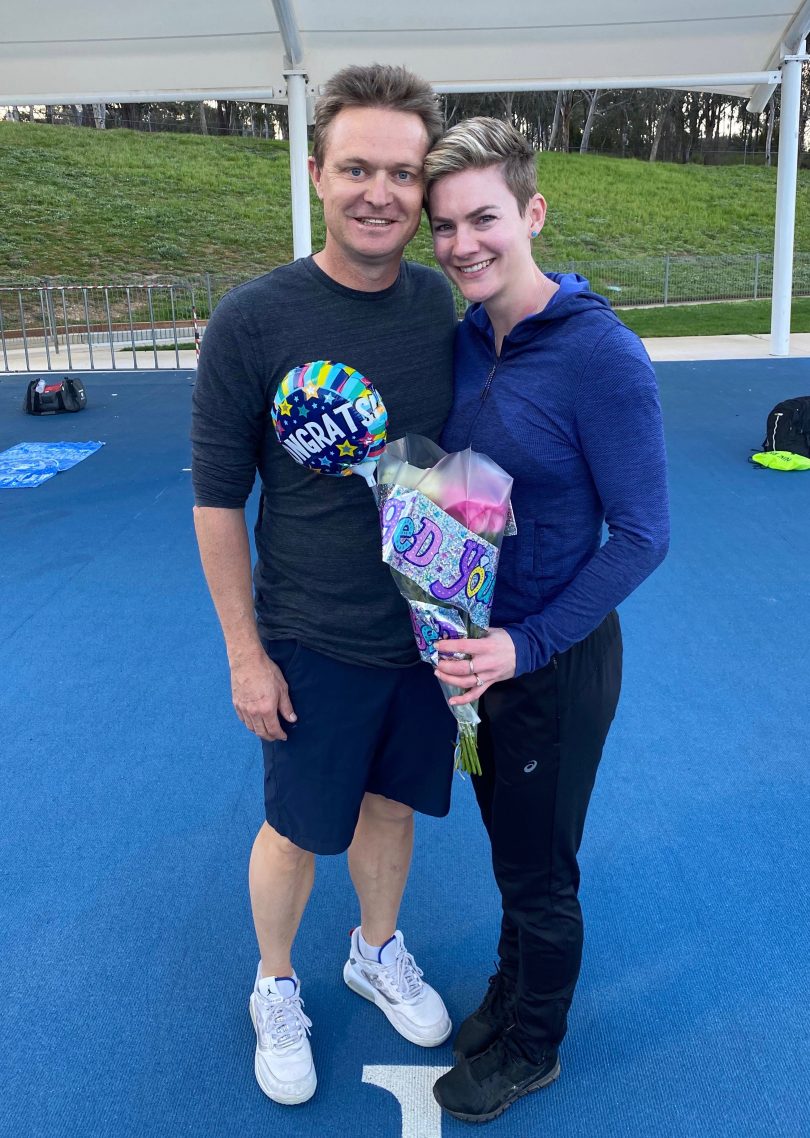 The venue was the familiar surroundings of the AIS track. Fittingly, he went down on bended knee at the start line of lane four.

I say fittingly as this is the lane and the venue where Mel broke Melinda Gainsford’s long-standing Australian record for the 100 metres in 2014.

Matt says there is another reason why he chose lane four: “As well as it being the lane where Mel broke the Australian record, there is also the concept of forever.”

And it does seem as though they have known each other forever as Matt had been coaching Mel for around 15 years until she announced her retirement earlier this year.

Matt said he initially wanted to surprise Mel at the finish line after a race but her retirement ended that scenario.

READ MORE: Mel’s on track for Tokyo, but will Olympic organisers pull the trigger or the plug on the Games?

Speaking to Mel a couple of months ago I had the sense that she felt as though the proposal was imminent. But Matt was determined to take her by surprise so he needed to come up with a plan.

Matt, like any good coach, is a planner and so he went about coordinating the proposal with every detail thoroughly thought out.

The first major decision was the ring.

Matt had to do this while Mel was away in Germany last year after he discussed the ring options with Mel’s mother, Bev. It had always been Bev’s intention for a ring, handed down through the family’s generations, to eventually become Mel’s.

Matt decided he was going to pop the question this week, so during a family get together on the weekend he picked the ring up, which had been hidden by Bev in a pre-arranged location for collection. Mel was none the wiser.

With the ring sorted, the next part of the operation was to get Mel out to the track. This was not an easy task given she had retired and had with no intention of running on the track again.

In fact, she probably wanted to create some distance given the amount of time she had spent there over the years.

Again, Matt came up a plan.

“I told Mel that one of our younger squad members was doing a school project on Mel’s journey and that she needed to have a chat with her as part of the assignment, as well as a photo on the track,” explained Matt.

“Once she was ready for the photo for the school project, I guided Mel to the start line at lane four.”

Mel knew something was up but wasn’t sure until Matt went down on his knee and produced the ring and proposed in front of the squad, many of whom thought they were there for a regular training session.

Only Matt and two members of the squad knew of his plan, which was kept secret right until he popped the question.

And Melissa Breen, on the very spot where she broke the Australian record in 11.11 seconds for the 100-metre sprint, did say “yes.”

Futureproof - 8 hours ago
Vote early, vote often. Will voter ID solve this?... View
kenbehrens - 10 hours ago
Stephen, as it turns out, School ID cards are a thing, if you work in a school you'll need a Working with Vulnerable People's... View
franky22 - 13 hours ago
I take it that the 55 senators are part of the nutjobs still claiming that the election was stolen from Trump ? View
News 2

Mel’s on track for Tokyo, but will Olympic organisers pull the trigger or the plug on the Games?