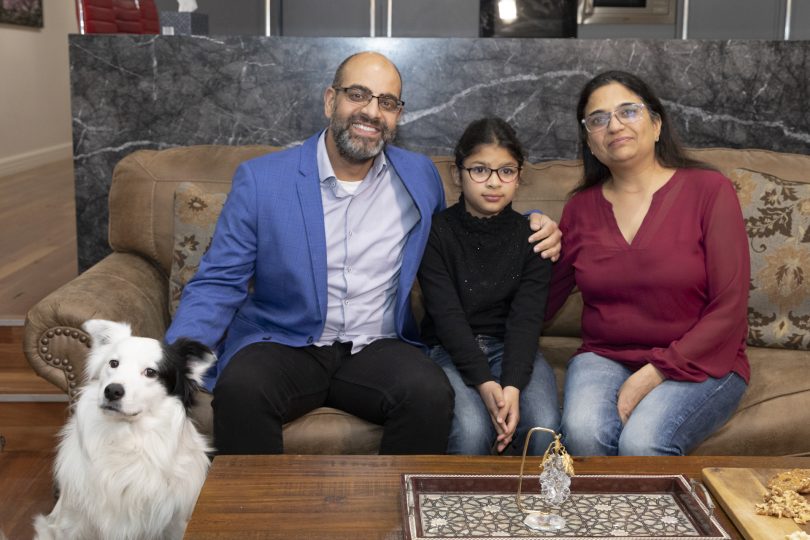 There’s a love story embedded in a life story when Arvinder Sachdeva and Gaurav Pharwa talk about their years together.

The girl from Delhi and the boy from Rajasthan set eyes on each other at the University of Canberra in 2004 and, Gaurav says, he was thunderstruck. It was love at first sight, no questions asked.

Arvinder is a bit more circumspect, although she says “you know when it’s right, we were just such a good fit for each other”.

Marriage followed, and a baby girl. But something was wrong. Arvinder felt constantly at a low ebb, listless, unwell in a way she couldn’t define.

Eventually, there was a devastating diagnosis of life-threatening kidney disease and only two answers. Either she could embark on a lifetime of dialysis, or find a kidney transplant.

This week's news update comes with a love story: Arvinder and Gaurav told us about how the gift of love became the gift of life when Arvinder fell gravely ill. We're also discussing the ACT's budget blues, birth certificate changes and the Ainslie kids' BMX track.

And that’s where the miracle unfolded. Unwilling to undertake dialysis, Arvinder blurted out to her doctor that her husband would give her a kidney “because I knew he would do anything for me”.

Several other family members also stepped up, but as it turned out, Gaurav was an exact match for his wife, so close that the surgeon was astonished to find they weren’t related.

“We knew that more than anything else, we wanted to raise our daughter together,” he says. “Not one always being ill or not here, not one of us taking all the responsibility. Together”.

And that’s how it turned out, together.

Years later, the Gungahlin couple are beaming as they finish each other’s sentence. She’s a brilliant cook, he does the cleaning, together they’re a lot fitter and eat better than they used to because they both want to make sure they use the gift of life to its fullest extent after the successful transplant.

All across Canberra, buildings have been lit up with magenta this week to mark Donate Life Week and build awareness around organ donation.

Lucinda Barry, who is the CEO of the Organ and Tissue Authority, says that COVID-19 restrictions posed a major challenge for the week, but the community response has been outstanding.

“We need people who do support organ donation to make the next step. It takes less than a minute and all you need is your Medicare card. Take the next step and have the conversation with your family”.

The rate of organ donors has remained stubbornly low despite the fact that most people approve of the idea. The problem, Lucinda says, is that very few people will actually be suitable donors and therefore we need as many as possible on the register.

There are moves afoot to return to recognising organ donation intentions on drivers licences around Australia, something many people still believe to be the case. Lucinda says that South Australia has retained the model after a number of other jurisdictions abandoned it, and around 70 per cent of their population are registered.

The OTA is also working hard to debunk the myths around organ donation, including that people will be too old or too unhealthy to donate.

“If you support organ donation, just register, tell your family and leave it up to doctors to decide,” Lucinda says.

“Our oldest donor last year was 84. Don’t write yourself off because you are too old, you still have the chance to save a life even at that age.”

This year’s We say “yes” and “thanks” campaigns discuss the real benefits of organ donation and transplantation, but have also focussed on the Indigenous and Culturally and Linguistically Diverse communities, combatting the belief, for example, that people are prohibited from donating by their religion.

Lucinda says that is simply not the case for any major religion in Australia, and that religious leaders have been actively supportive, as have Indigenous community leaders.

And while COVID-19 has forced Donate Life week events online, Lucinda says she is encouraged with the very strong level of interest.

“I’ve been swamped with requests for comment this year, so I’m hopeful the message is really getting out there,”, she says.

chewy14 - 16 minutes ago
"Inevitably, some of us will slip into past behaviours, and others are forced to call it out and gently point out the rules t... View
Opinion 11

Rollersk8r1 - 27 minutes ago
Quite happy as a GWS member. In normal times it’s an ideal arrangement. Four games a year at Manuka (1 pre-season), plus AF... View
Ben Jones - 2 hours ago
No one will go apart from the die hard fans. Until they start winning and the whole of the ACT become fans overnight. View
Opinion 197

David John Hourigan - 31 minutes ago
John Slow too many round abouts...! View
Matthew Robinson - 10 hours ago
Would be great but no way the government would support it. View
Opinion 20

@The_RiotACT @The_RiotACT
A Canberra man has died after being struck by a car from behind while walking in East Queanbeyan on Wednesday night https://t.co/rM6J2eFG0o (8 minutes ago)

@The_RiotACT @The_RiotACT
After 40-odd days of #lockdown, the novelty has worn off and many of us are struggling to maintain the lockdown behaviours we were once diligent about. Zoya Patel asks, are we becoming too complacent about the #COVID rules as lockdown progresses? https://t.co/ilgv6BzSgO (51 minutes ago)