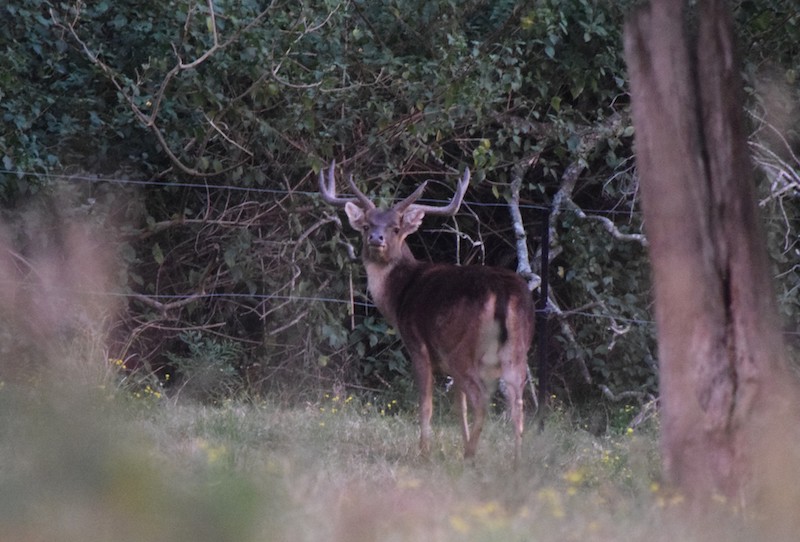 The aerial shooting program was undertaken by a team of experienced contractors overseen by the Parks and Conservation Service. File photo.

Over 150 deer have been culled in what the ACT Government has called a ‘successful’ aerial shooting program in the Murrumbidgee and Molonglo River Corridors and surrounding land last week.

In total, 152 fallow deer, four sambar deer as well as 11 feral pigs and one feral goat were culled as part of the program.

Calling deer “invasive animals that graze on native plants, kill young trees through antler rubbing and cause damage to sensitive river corridor environments with their hooves”, Mr Orgill said they have the potential to cause significant environmental and agricultural damage if populations are left unchecked.

“We have been able to significantly reduce the emerging feral deer populations in Bullen Range, Woodstock and Lower Molonglo nature reserves and surrounding areas before they have a chance to become established,” Mr Orgill said.

“Of note, we were able to remove over 50 fallow deer from the Lower Molonglo nature reserve which will reduce the likelihood of deer from this population moving up the river corridor and into urban areas.

“This will reduce impacts on our nature reserves and surrounding farmland.”

ACT Parks and Conservation regularly undertakes ground-based deer control programs with previous programs at Googong foreshores removing 430 deer since 2014, and 60 deer in sensitive areas in the Murrumbidgee River corridor since 2015.

Alongside an independent vet who monitored the program to make sure the cull took place humanely, Mr Orgill said the successful cull shows the program is effective and will be implemented again.

“The success of the operation lays a solid foundation and demonstrates this type of program is effective, efficient and operationally sound,” he said. “It will be able to be implemented again in the future to control emerging feral deer populations.

“An independent vet helped monitor the operation and undertook over 50 carcass inspections on the ground. The auditing revealed all feral deer were culled humanely in accordance with operational protocols and no adverse welfare outcomes were reported.

“We thank the public for cooperating with the nature reserve and trail closures for the duration of the program.”

Nature reserves and walking trails, including part of the Centenary Trail were closed while the program took place, but have now reopened.

It’s hardly a success when deer are ignored and allowed to breed up to the point where drastic, expensive and socially unpalatable measures like this are required, and then nothing happens until they breed up again and we do it all over again.
Meanwhile, members of local organisations like the ADA would readily volunteer their time to conduct sustained management, which minimises any problems and avoids the need for helicopter gunships all together.
But that’s not sexy and worthy of a headline is it?

They are beautiful, if you go to Crackenback resort you see them around the perimeter

Unfortunately they are pests, althought it is through human that they have become feral??? So who is the real problem ??

Just like our kangaroo cull. They don't use the meat or their skins. They did a big hole & dump the kangaroos body into a pit with all the others they have shot.

Aerial culling is never successful. It's disgusting and inhumane. There other ways. If the situation has gotten to this point, the Government has been failing for some time prior. 😡

150 deer in all that time! 🤔 there is something wrong with their program. We do that in a few of nights,

Says aim was preventative (so they dont have to cull larger numbers of deer in later years) therefore the economics is not about how many were shot.

I love how humans make decisions...deer are now biggest problem we have. live by sword, die by sword...

Patrick Rezek If they arn't culled they will end causing more accidents on our roads.

Maree Sheahan who is colliding with who here?

John Perkins anyway how would you know????

I hope they made use of the meat and skins...

Killing such a beautiful animal.....i have never seen a wild one in 20 years :(

John Perkins to who?

Jackie Fuller there are a few dead ones between Canberra and Sydney that have been hit by vehicles.

I have seen a large stag run across the federal near north end of lake George. That would have been like hitting a cow.

Jackie Fuller would you would rather it die slowly with internal injuries after being hit by a vehicle?

Jackie Fuller , I was at the NSW/Vic border last weekend near the snowy river and saw about 6 in the space of 2 Kms. That is 6 to many. They are an invasive species.

Jackie Fuller three weeks ago, one man was killed and another injured in Victoria by a deer. These creatures aren't Bambi.

Very hard to cook venison, even harder to cook than roo. Both good for BB comp prep or when you're cutting for summer.

I hope they saved their skins...

all these blind people who can't see the damage they do have no eye deer. 😂

And what happens to the dead deer? They just leave them?

Why can we go an kill them for food?

Troy Booth they probably give the meat to the zoos

Sue Booth the kill them via helicopter and leave them. They should let us kill them and take them for meat. Venison is beautiful tasting meat

Got to feed the wild dogs/foxes/pigs somehow

Troy Booth wild deer are full of parasites, but if you have a license you can hunt and eat them

sometimes they bury the bodies in a big pit

LJ Tas that's what shits me, you have to have a license to kill for food. Not to sure about the meat of the animal been full of parasites tho.

Steve Willett 100% They want to keep justifying their jobs.

So after spending tens of thousands, if not well into 6 figure territory for shooters and running costs on a chopper, they only got 150 deer?

I would hardly call that a success. More like a gross mismanagement of funds.

Joshua Grech - 8 hours ago
David Rees Oh, interesting. There are others. Thales etc View
David Rees - 8 hours ago
I think you will find it did, has got out of trains now. View
astro2 - 9 hours ago
Doesn't need to be high speed, just higher speed would do. The most recent proposal featured very little changes beyond a bit... View
Community 8

chewy14 - 10 hours ago
Perhaps you can link to actual scientific research or investigations showing this particular proposal will cause health issue... View
Capital Retro - 12 hours ago
The residents of Conder and suburbs to the south should worry about this proposal as the standing inversion layer that plague... View
News 9